How the Syrian Regime Capitalises on Property Destruction and Land Legislation 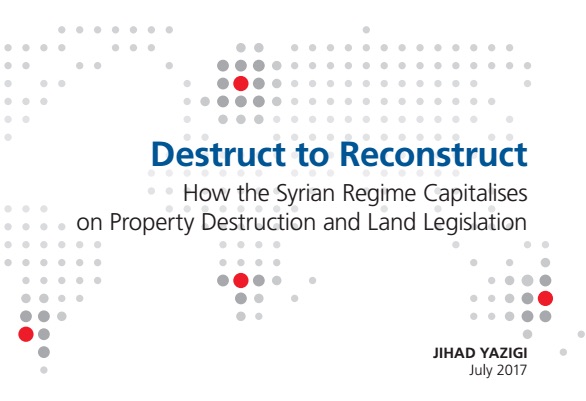 For decades, land and property issues have been a source of conflict in Syria. Over the course of the conflict, however, they have taken a broader dimension and a much more violent turn. Indeed, during the past six years the Syrian regime’s policies and efforts with regard to land and property have included the large-scale physical destruction of property, the erasure and falsification of records, and population displacement.

Meanwhile, various laws and regulations have been enacted – such as the public private partnership law – which are presented as modern pieces of legislative reform, but in practice formalise the transfer of assets owned by the state to regime cronies. This paper argues that these policies have been carried out with the aim of reaching two broad objectives: first, to serve as weapons of war and extend the regime’s political control; second, to advance the economic interests of the regime’s elite and capitalise on the expected reconstruction drive.