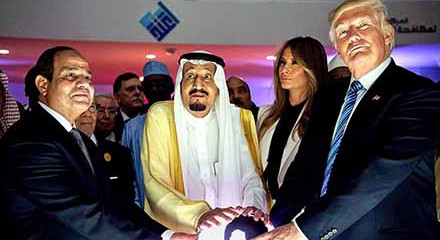 Last year, when Donald Trump was elected US president, old-order defenders of imperialism were telling the citizens of poor third-world countries run by dictators that the ‘checks and balances’ in the wonderful democracy that is the US will stop Trump’s mad policies from becoming reality.

Unfortunately, although the claim could well have some truth in relation to internal policies, when it comes to international politics and the Middle East in particular, many of his most irrational election statements are becoming a reality. Amongst them the pro-Israeli, pro-Saudi policy goes well beyond traditional US neoconservative positions. Here Trump’s unelected son in-law, Jared Kushner, is playing a crucial role advising simultaneously both Saudi Arabia and Israel.

This week we had confirmation from the Israeli army’s chief-of-staff, Gadi Eizenkot, of the scale of Saudi-Israeli cooperation. In his first ever interview with a Saudi newspaper, Alaf, Eizenkot told the world that Israel is ready to share intelligence with Saudi Arabia on Iran. Also for the first time, Israel co-sponsored with Saudi Arabia a resolution against Syria in the UN Human Rights Council. Furthermore, Israeli communications minister Ayoub Kara extended a warm invitation to Saudi Arabia’s grand mufti, Abdulaziz al-Sheikh, for what he said were his friendly comments about the country. All this follows a period during which Saudi crown prince Mohammed Bin Salman has undertaken a number of unprecedented steps, which include the arrest of scores of princes and ministers, and direct intervention in Lebanese and Palestinian affairs.

To ‘legitimise’ steps taken to normalise relations with Israel, Saudi Arabia summoned Palestinian Authority president Mahmoud Abbas to Riyadh last week, to convince him to accept a peace plan put forward by Kushner. Of course, Saudi-Israeli collaboration is an important part of that plan. According to the New York Times, the proposal could include, among other normalisation measures, “overflights by Israeli passenger planes, visas for business people and telecommunication links” with Saudi Arabia, Egypt, Jordan and the United Arab Emirates.1

In Yemen civil war continues and the Saudis have the support and cooperation of the US as well as the UK. In the words of Ron Paul writing in the New American:

And why is there a cholera epidemic? Because the Saudi government – with US support – has blocked every port of entry to prevent critical medicine from reaching suffering Yemenis. This is not a war. It is cruel murder.

The United States is backing Saudi aggression against Yemen by cooperating in every way with the Saudi military. Targeting, intelligence, weapons sales, and more. The US is a partner in Saudi Arabia’s Yemen crimes.2

Then we have the public revelations of Israeli-Saudi cooperation. Of course, no-one had any doubt that it had entered a new phase since Trump’s election. However, the open admission of such relations implies a new era in the politics of the Middle East. On November 20, Yuval Steinitz, Israel’s energy minister, confirmed there had been contact between Israel and Saudi Arabia, but said that Riyadh was eager to keep the cooperation a secret: “We have ties that are indeed partly covert with many Muslim and Arab countries, and usually [we are] the party that is not ashamed.”

This claim is in direst contradiction to the official Saudi statement – foreign minister Adel al-Jubeir has said several times in the last two years that Saudi Arabia has “no relationship” with Israel and there have been no secret back channels. Yet last year, after his visit to Riyadh, Mr Trump told the world that he found king Salman and the Saudi leadership to be “very positive” towards Israel.

So less than a year since Trump took office we are seeing new alliances in the Middle East. There is no longer a major war against Islamic State and no-one wants to mention al Qa’eda or its offshoot, Al Nusrah. The ‘enemy’ is Iran – uniting Saudi Arabia, Egypt, Israel and the majority of the Persian Gulf states.

What we are witnessing is the formation of a new imperialist-led alliance against Iran’s Islamic Republic. Under such circumstances it is bizarre that we keep hearing about a Sunni-Shia conflict. Typical of such ignorant articles is one by Paddy Ashdown in The Independent:

The greatest threat to world peace coming out of the Middle East now is not terrorism, but the danger of a wider Sunni-Shia religious conflict, into which the great powers are dragged.3

The great powers aren’t dragged into this war: they are behind it. To think that Liberal Democrats were once speakers on Stop the War Coalition platforms.

A firm supporter of the new alliance is Trump’s best friend in Europe, Emanuel Macron. Alain Badiou calls Macron a “neoliberal phantom” and a “leader of a democratic coup d’etat”, who is losing support fast amongst those who voted him president in preference to the much hated Marine Le Pen.

To divert attention from his failures at home Macron has become super-active on the international scene – after all, France is the ‘legitimate’ foreign power which has ‘Lebanon’s interests at heart’. That is why he invited Saad Hariri to Paris and appeared on the steps of the Elysée Palace with the ‘former’ premier of Lebanon – a man who only days earlier had resigned from his post while in another country, Saudi Arabia, on a TV channel owned by Saudis, by all accounts reading a text written for him by his hosts, in which he complained about Iran’s influence in his country!

You might have thought that this was a scene from some comedy, but unfortunately it was all too true – and all too dangerous: the lead players in the drama, Trump and Macron, are so ignorant of regional sensitivities and historical facts that we could be entering a truly catastrophic period for the Middle East. In the last few days Macron has had talks on Lebanon with president Abdel el-Sisi of Egypt, prince Salman al Saud of Saudi Arabia and Donald Trump himself.

All this because Iran has what they regard as ‘undue influence’ over Hezbollah. Yet despite concerted Saudi/US/French efforts, there is no sign of civil war in Lebanon. The Christian president, Michel Aoun, remains critical of Hariri’s resignation and in fact as soon as the ‘former’ premier landed on Lebanese territory, he decided to ‘temporarily suspend’ that resignation:

Today I presented my resignation to his excellency the president, and he asked me to temporarily suspend submitting it and to put it on hold ahead of further consultations on the reasons for it … I expressed my agreement to this request, in the hope that it will form a serious basis for a responsible dialogue.4

So on what basis did France believe it had the right to intervene in Lebanon’s affairs? Macron – who, by the way, likes to hold cabinet meetings in Versailles – acts as if France is still the colonial protector of Lebanon and Syria. No wonder France is a recruiting ground for IS and other jihadi terrorist groups.

However, many Sunnis in Lebanon believe the Saudi ‘plot’ has already failed. Reports from Beirut talk of the anti-Saudi sentiment expressed by the Lebanese Sunni community. According to Joe Macaron, who is a policy analyst at the Arab Center in Washington, “Riyadh’s risky gambit had no realistic endgame or allies to execute it. It has failed miserably, no matter the outcome.”5

According to Sunniva Rose, Al-Monitor’s reporter who visited the mainly Sunni city of Tripoli,

The escalating regional tensions and Saudi Arabia’s increasingly aggressive rhetoric have direct and dangerous implications for Lebanon. Mustafa Alloush, a former member of parliament from Tripoli and a member of the political bureau of Hariri’s party, the Future Movement, is pessimistic. “The only way to get out of the situation is through a major clash. If there is enough money funnelled into Lebanon from abroad, a civil war can happen again” …

But in the streets of Tripoli no-one wants to hear this … In the main square, dozens of taxis stand in line waiting for customers. “I never vote,” taxi driver Mohammad Badra told Al-Monitor … “I would only vote for a politician who offers new job opportunities, and no-one has done that recently.”

For jeweller Omar Namel, the political scene in Lebanon is an “embarrassment” … Lebanon “deserves better than politicians like Saad Hariri, or anyone else”, he told Al-Monitor.6

In the meantime another world power, Russia, is building its own alliance. Within one week the Black Sea resort of Sochi has been host to a summit between Bashar al-Assad of Syria and president Vladimir Putin, and a conference where Hassan Rouhani of Iran and Recep Tayyip Erdoğan of Turkey joined Putin and Assad to discuss the future of Syria and presumably Lebanon.

Every one is fighting over influence and control post-IS, but the reality is that, contrary to claims by general Qasem Soleimani of Iran’s Revolutionary Guards, IS remains a danger not just for the countries of the region, but also for the rest of the world. The new instability fuelled by Trump, Macron and all the rest is precisely what IS needs at a time when it has lost 95 % of the territory it once controlled in Iraq and Syria.