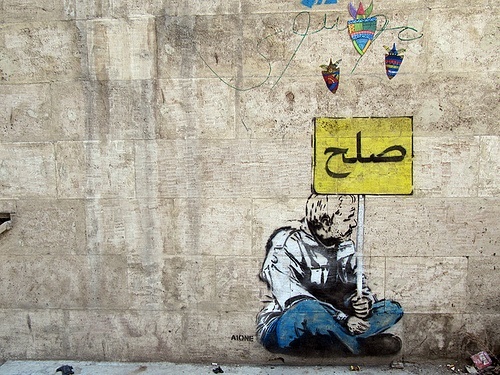 “You are no artist if you are drawing on a wall with spray paint. You are either a vandal or a political activist scribbling a slogan,” Iranian graffiti artist “Mad” said of the longstanding public’s opinion on street art.

“Our initial problem was that no one would differentiate between our work and vandalism. Street artists not only faced public intimidation in Iran, but they were also threatened by the police, the Basij forces and other security organizations,” Mad told Al-Monitor.

Iran’s walls have played a complicated and contradictory role in citizen activists’ protests. In the years leading up to the 1979 revolution, political slogans or images of leaders of the revolution began to adorn the country’s walls, turning public spaces into a platform for calls of a revolution.

Following the establishment of the Islamic Republic, the walls became a battleground for different political groups. In 1980, with the start of the Iran-Iraq War, they became a platform for advertising the “Sacred Defense.” When the war came to an end in August 1988, the walls once again became a place for the ruling establishment’s Iranian, Islamic and anti-imperialistic indoctrination. In fact, most writings and images that covered the walls during this time were sayings by the Prophet Muhammad, Shiite imams, Islamic Revolution founder Ayatollah Ruhollah Khomeini, Supreme Leader Ayatollah Ali Khamenei and war heroes.

With the arrival of a more modern style of art to the streets, this age-old tradition also came to an end. In the new era, Iranian street artists would sneak out at night, away from the eyes of the police, to paint their drawings on walls, illustrating themes of human rights, war, poverty, dictatorship and censorship.

Graffiti are not a crime

Karan Rashad, known as A1one, is one of the pioneers whose artworks first appeared on the walls of Tehran in the late 1990s. His stenciled works often have a social and political theme to them, whether it is protesting the filtering of the internet or the hanging of a dictator such as Saddam Hussein. Rashad has held dozens of exhibitions abroad, from the United States to France, but very few of his artworks are still on display in Iran, which he left in 2012.

Speaking about the critical themes used by Iran’s first generation of street artists, Mad said, “If you look at these artists’ earlier works, you will see that their critical tone — which stemmed from Iran’s closed-off atmosphere — actually brought more attention to them.”

In Iran, just as in most other countries, spray-painting on a public street is considered damaging public property and is deemed illegal. However, Iranian law does not stipulate a clear punishment for this crime.

“The main problem is you don’t know what kind of danger you will be facing. This means [you don’t know] what you will be charged with if you get arrested,” said Ill, another Iranian street artist whose stencil work can be seen in the northwestern city of Tabriz. His most famous artwork is a manipulated human portrait, in which there is a mute sign instead of a mouth and key holes instead of eyes. It is a criticism of censorship.

Ill has been arrested several times while painting. He told Al-Monitor, “When I was arrested for the third time, they accused me of satanism, engaging in anti-establishment activities, disrupting public peace and destroying public property. These are serious crimes, but I did not commit any of them.”

Ill said his street artworks generally have a short life as the municipality quickly washes them off or paints over them. “Most paintings are removed within a few hours. If they remain on the walls for a week, I am happy. Sometimes I think of the person who washed it off and wonder whether he got a good look or established a connection with my work while he was painting over it.”

Mad said municipalities are determined to paint over graffiti and murals regardless of the subject. He said 95% of his artwork is wiped out almost immediately. “Once I did a painting of a disabled war veteran in Tehran’s Valiasr Street at midnight. I painted him sitting in a wheelchair with barbed wire around his neck instead of a wreath of flowers. When I came back to take a picture at 6 a.m., it was gone. The municipality had painted over the entire wall.” He added, “Very few of my paintings are still on display after several years.”

He said that whenever his artworks do escape being painted over and stay on the city’s walls for several years, “This is very unusual and we are surprised.”

In 2006, the Tehran municipality called on Iranian artists to send in their designs and ideas for wall murals for the city. They ultimately selected the painter Mehdi Ghadyanloo, whose work wound up being quickly seen on close to 100 walls across Tehran. Ghadyanloo’s drawings on the smog-ridden municipality’s walls depict a utopia of a green and clean city with blue skies and happy people.

Mad said most street artists boycotted the municipality’s call at the time. “The main reason was censorship, because the artist was not allowed to paint just any theme. This goes against [the principle of] street art. For instance, 90% of my paintings would not go over well with the Iranian municipalities because it contradicts their ideology, position and demands,” he said.

But Iran’s new generation of street artists seems to have fewer hesitations when it comes to working with municipalities and has been criticized by older artists. Iran Graffiti, a web portal for street art that was launched in 2006, said in December 2016 that the works of the new generation “are devoid of what are described as ‘graffiti’ values. They have an entertainment and unfortunately sometimes a commercial aspect to them … [but] they have connected well with the municipalities and those who deface graffiti. Their works pose no headache for the [authorities] — they go along with their policies. These artists have even reached a point where they paint on street walls in broad daylight without any fear or anxiety.”

Mad said the public has warmed to street art after nearly two decades. “Now there is at least more awareness and knowledge about street art in Iran. Sometimes when I work, I expect poor public response, but then very unexpectedly I see that they are watching over me, giving me advice on what to draw and even talking to me about my work and sharing their opinion. I have had positive feedback by the public in recent years,” he said.

Zahra Alipour is an Iranian journalist based in Paris who focuses on cultural affairs. She has reported for several leading Iranian media outlets.