Turkey: conflicts on many fronts 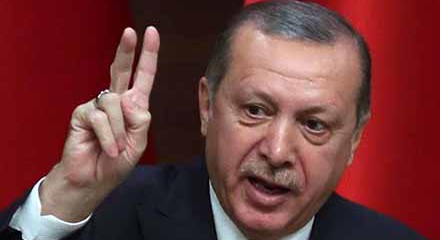 Despite the popularity of Turkish actions in Syria, Cyprus and the Aegean, the ruling AKP is forced to seek allies at home.

Turkey’s offensive in the Afrin province of Syria has been going on for six weeks without losing its ferocity. According to official communiqués, its army – along with a hodgepodge of various militia groups, trained, equipped and financed by Ankara – has cleared the high ground along its borders, and is now ready for an offensive on the flat lands leading to Afrin town.

Of course, official communiqués do not always represent the reality on the ground. The speeches of president Recep Tayyip Erdoğan and his ministers, as well as those of the army top brass, are full of words such as ‘duty’, ‘flag’, ‘heroism’ and ‘sacrifice’. The daily body count of Kurdish fighters, as well as every nook and cranny of the mountain defences conquered, have been blared out by the media. Loyalist mobs have been mobilised on demonstrations in support of the army and government, and the funerals of fallen soldiers have been used to further stoke up the war hysteria.

Of course, despite a UN security council resolution for a truce in Syria, the shooting war never stopped. Turkey simply ignored it and continued its operations. According to the foreign ministry, the resolution did not specify Afrin, and so it cannot be applicable to Turkey. Ankara was advised by French president Emmanuel Macron and the US state department to read the resolution again, but Turkish officials insisted that it was their allies in the western world who had got things wrong. They also called on the US to seize back the arms it had distributed to the Kurdish YPG (People’s Protection Units), since the war against Islamic State in eastern Syria was now over.

Meanwhile Czech police arrested the former leader of Syria’s Democratic Union Party, Salih Muslim, on an international warrant issued by Turkey. If one remembers, Muslim visited Turkey when he was in office in the Democratic Federation of Northern Syria (Rojava) and was given the red-carpet treatment by the Turkish regime, but he has been charged with offences such as causing explosions in Turkey. He was soon released, but his arrest served to reinforce the government’s claims that they were pursuing terrorists all around the world.

Then Muslim appeared as a speaker at a public meeting in Germany, giving Ankara the opportunity to channel its opprobrium towards Berlin once more. So it seems that the only remaining ally of Turkey that has not been condemned as a supporter of terrorism is the UK.

Turkish intentions within the occupied Syrian territories are beginning to be clarified. The predominantly Kurdish region also has a large Turkomen and Arab population, yet despite the major population upheavals Afrin remained quite stable for almost five years, and IS could not get a foothold there.

But now the whole Kurdish population is leaving the areas occupied by the Turkish army, and Turkey is preparing to transfer back some of the refugees who have been in camps in Turkey. Of course, they would be very carefully selected in line with Ankara’s intention to maintain its long-term domination of the region.

A similar campaign to relocate the population in the previously occupied zone near al-Bab and Azaz has already been in full swing, but the prospect of using that territory as a springboard to unleash another military campaign in order to push the YPG to the east of Euphrates River is delaying the resettlement programme.

It is now an open secret that Turkey will not get out of Syria in the near future. Its aim is to change the population balance and maintain a puppet regime there to keep control. That was what happened in Cyprus, and before that in Hatay province in southern Turkey.

The occasional flaring up of a crisis over the unoccupied Turkish islets of Kardak in the Aegean is a quite important indicator of Turkey’s ambition to extend its influence in the Mediterranean. In 1982 when the United Nations Convention on the Law of the Sea (UNCLOS) was agreed, Turkey’s military junta was busy dealing with other problems and it was quite late in the day when it was realised that UNCLOS would create an Aegean Sea dominated by Greece.

Turkey remains among the few countries that still refuse to sign the UNCLOS agreement, which limits a state’s national rights to 5.6 kilometres of its coastline, and has stated that any unilateral action of Greece to implement UNCLOS in the Aegean would be regarded as an act of war. Since then the two Nato ‘allies’ have played cat and mouse in the Aegean Sea. They have engaged in mock confrontations, with the naval vessels of one power sometimes pursuing those of the other. These are often a question of brinkmanship, but have occasionally turned deadly.

During the cold war the US paid particular attention to maintaining the balance of forces in the region through military aid and trade. However, European arms-exporting countries, such as Germany and France, did their best to challenge US hegemony. Turkey’s increasing capacity to build ships and equip them with locally produced armaments, not to mention the financial restrictions imposed on Greece, seems to have shifted the military balance.

Despite all the problems, it seemed there was a genuine possibility of a rapprochement at the beginning of the 21st century – until in 2008 new natural gas fields were discovered under the Mediterranean between Cyprus, Egypt and Israel. Suddenly the expectations of getting rich quick spread like a fever in all the countries of the region.

Greece and Egypt agreed on delimiting their exclusive economic zones (EEZ), while the European Union reminded Turkey that EU membership requires compliance with UNCLOS. Meanwhile Turkey declared its own EEZ on behalf of Turkish Cypriots – which served to bolster its own claims over Cyprus. Ankara declared that it would regard gas exploration by the Republic of Cyprus as an act of aggression and in 2008 sent a naval force to harass Cyprus-contracted exploration vessels.

However, after 2011 it became apparent that ‘get rich quick’ was a dream – even the Leviathan gas field off the Israeli coast barely warrants the massive investment that would be required. So tensions reduced. Then in 2015 the Zohr gas field north of Egypt was discovered. Despite the political turmoil, there was massive investment and in December last year the field started to pump gas into Egypt.

That provoked a re-escalation of the crisis. Now it seemed that Israel’s Leviathan gas field and even the puny Aphrodite field in the Cypriot zone made for a viable investment opportunity – provided that they could be linked together through a pipeline system. The Cypriot government, and behind it the Greeks, thought this was an opportune moment to reinvigorate their exploration and pile international pressure on Turkey. As expected, Turkey reacted sharply and declared an exclusion zone. It decided to hold a naval exercise in the disputed area, maintaining a five-ship presence throughout.

Turkey seemed to have come out best from the brinkmanship, but the next scheduled Cypriot exploration is next week in the sector to the south-east of the island – furthermore it would be an American operation. And the US naval presence in the region is not insignificant.

So suddenly the Turkish government has recalled the actions of revolutionaries against the visit of US Sixth Fleet to Turkey in 1968. Miraculously revolutionary songs were converted into Islamist and nationalist hymns, and were played in the state-controlled media. Ironically the current speaker of the parliament was in 1968 a leader of a rightwing student organisation, and one of the organisers of the Islamist-nationalist mob that attacked the revolutionary students. That event gained infamy as ‘Bloody Sunday’ – three demonstrators were killed in the Taksim area of Istanbul and hundreds were wounded. It was a case of going full circle – without even a hint of shame, of course.

The nationalist-Islamist rhetoric suddenly gained a pseudo-anti-imperialist tinge. These developments startled the so-called nationalist socialists of Turkey. Most of them thought the best thing to do under present conditions was to hide under the skirts of the so-called social democratic CHP (Republican People’s Party). Some even went the last mile and pledged their support to the ‘Public Coalition’ – the new formal alliance of the ruling AKP and the far-right MHP- the inheritor party of infamous Grey Wolves.

Meanwhile, the leftwing HDP (People’s Democracy Party) held its congress and elected a new leadership. Despite the massive crackdown on the party, it is trying to act as the focus of the popular opposition to the Erdoğan regime.

In fact things are slipping out of the regime’s control. Erdoğan knew he would have no chance of winning the next election if the AKP stands alone, so it has attempted to use its majority in parliament to change electoral law. Although he previously claimed that any such change would not be applicable to the following election, he is, of course, more than capable of performing about-turns. And now he is desperate. Yes, he still has a parliamentary majority, the war in Syria has been popular and he has attempted to gain support from a showdown with Greece, but despite all that he is still in a desperate situation. Toppling him in the 2019 elections is a real possibility.