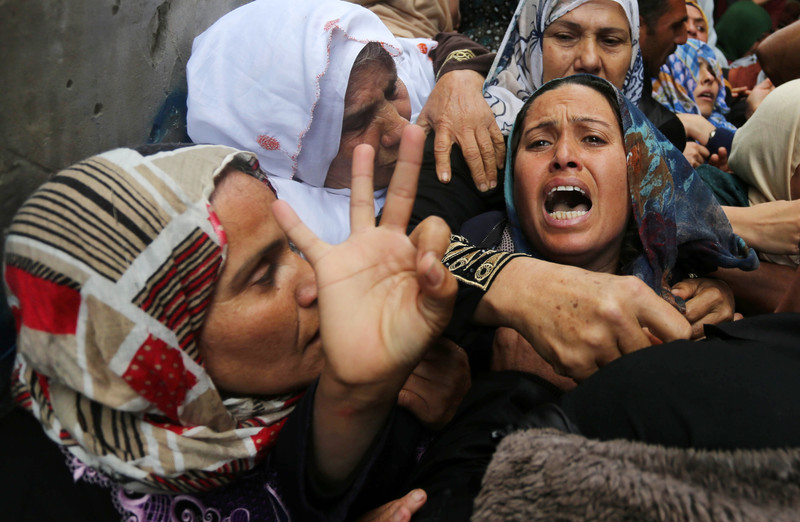 The Israeli army posted a statement on Twitter on Saturday apparently accepting full responsibility for the killings a day earlier of 15 Palestinians as thousands took part in the Great March of Return in Gaza.

The army then quickly deleted the admission – as more evidence of war crimes by its soldiers came to light – but not before a copy was made by the human rights group B’Tselem.

The now-deleted tweet from the official @IDFSpokesperson account stated: “Yesterday we saw 30,000 people; we arrived prepared and with precise reinforcements. Nothing was carried out uncontrolled; everything was accurate and measured, and we know where every bullet landed.”

Sarit Michaeli, B’Tselem’s international advocacy officer, characterized the statement as meaning that the “Israeli army takes full responsibility for the killing of all unarmed protesters and the injuring of hundreds with live ammunition.”

The army’s deletion of the tweet is hardly surprising. The admission that its killings of demonstrators were premeditated down to the last bullet means it cannot deny responsibility for apparent war crimes, such as the lethal shooting of Abd al-Fattah Abd al-Nabi, 19, as he ran away from the Israel-Gaza boundary fence. Abd al-Nabi was reportedly shot in the head.

Video of the slaying, widely shared on social media, shows Abd al-Nabi running alongside two other Palestinians far away from the boundary fence when the crack of a gunshot is heard and he falls suddenly.

The Israeli newspaper Haaretz published a video of the same incident from another angle:

Another video apparently shows a man being shot and injured as he prayed with a group of Palestinians, with the boundary fence visible in the far distance.

Times of Israel reporter Jacob Magid commented that the Israeli army is “gonna have a hard time saying this guy fell off his bike.”

This is a reference to the army’s transparently false claims that Muhammad Fadel Tamimi, the 15-year-old boy shot in the head by one of its soldiers in the occupied West Bank in December, had merely had a bicycle accident.

On 29 March, B’Tselem’s Michaeli noted that Ofir Gendelman, an Israeli government spokesperson, used a video of an unarmed Palestinian being shot in the leg while standing still to “threaten Gazans” on the day of the planned Great March of Return.

The Israeli army’s admission of responsibility accorded with reports prior to Friday that the military had prepared for the protests by deploying dozens of snipers with orders to shoot demonstrators entering an Israeli-imposed no-go zone extending hundreds of meters inside Gaza along the boundary.

In addition to the slayings, at least 1,400 Palestinians were injured as Israeli forces used live ammunition, drones firing tear gas and even artillery along the Gaza-Israel boundary where Palestinians had gathered Friday to commemorate Land Day and protest Israel’s refusal to allow them to return to lands from which Palestinians were ethnically cleansed.

The charity Medical Aid for Palestinians called Friday “the bloodiest day in Gaza since Israel’s 2014 offensive.”

According to the health ministry spokesperson in Gaza, at least three more people were injured with live ammunition on Saturday.

Also on Saturday, the human rights groups Adalah and Al Mezan issued an urgent call on Israel to allow medical teams to enter the no-go zone to search for two missing Palestinians whose condition is unknown.

“The Israeli military’s use of 100 snipers against unarmed Palestinia

n civilian protesters in the Gaza Strip is illegal,” Adalah stated Friday. “Live gunfire on unarmed civilians constitutes a brutal violation of the international legal obligation to distinguish between civilians and combatants” – in other words war crimes.

As Human Rights Watch on Friday condemned as “shocking” the number of Palestinians killed and injured by Israeli gunfire, the UN Security Council met that night to discuss the situation. Israel’s representatives boycotted the session.

UN Secretary-General Antonio Guterres has called for an independent inquiry into the violence.

Although such inquiries in the past have uncovered evidence of Israeli war crimes, they have never led to effective action to hold Israel to account.

Guterres himself, acting under US pressure, last year suppressed a UN report that found Israel practices apartheid against Palestinians.

It took until Saturday for the European Union to issue a statement that “mourns the loss of life.”

The EU acknowledged that Israel used “live ammunition during clashes and demonstrations” but endorsed Israel’s “right to protect its borders” with “proportionate” force.

The EU also endorsed the UN’s call for an investigation and, equating occupier and occupied, urged that “those concerned need to exercise restraint.”

In Canada, Hélène Laverdière, foreign affairs spokesperson for the center-left opposition New Democratic Party, condemned the “shocking situation” and demanded that Israel “must abide by its responsibilities under international law and respect human rights.”

After 24 hours of silence, Jeremy Corbyn, leader of the UK’s main opposition Labour Party, posted a statement on Twitter that the “killing and wounding by Israeli forces of civilians demonstrating for Palestinian rights in Gaza is appalling.”

But Corbyn – who has been under sustained attack from Israel lobby groups that have justified the massacre in Gaza – did not call for any action to hold Israel accountable.

Previously, Corbyn has called for an arms embargo on Israel and endorsed some tactics of the boycott, divestment and sanctions (BDS) campaign for Palestinian rights.

Jean-Luc Mélenchon, the left-wing political leader in France who has also faced an Israel lobby smear campaign in recent days, offered condolences to the families of Palestinians killed and called for the deployment of UN forces.

But apparently secure that it will not face calls for real accountability – even from lifelong supporters of Palestinian rights such as Corbyn – Israel is issuing new threats to escalate its violence against Palestinian protesters.

Given ongoing official silence, complicity and inaction, Palestinians will be counting on a major escalation in grassroots support through boycott, divestment and sanctions campaigns to finally bring Israel to account.