Bread, water and roses: The guerrillas of Shengal (Sinjar) 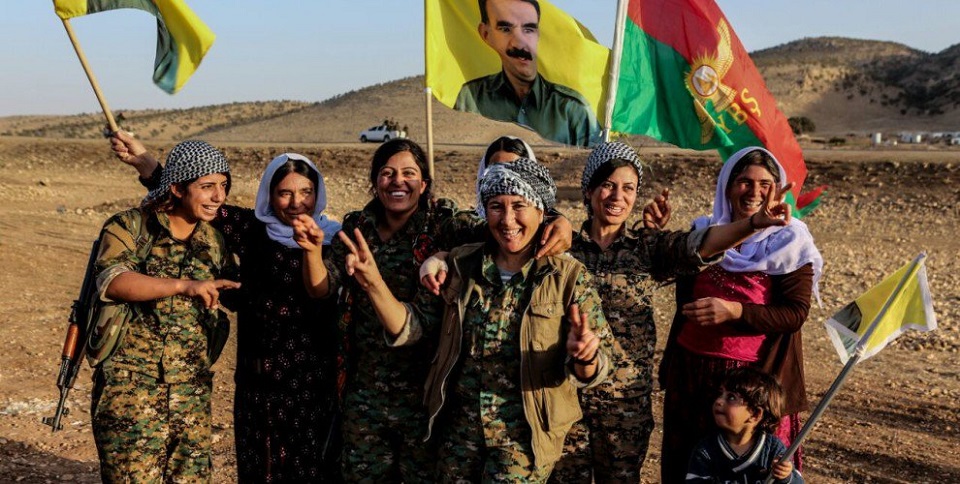 Powerful, sobering and heart-wrenching images are once again to be seen from the Yazidi heartland of Shengal, otherwise known as Sinjar. In stark contrast to the hideous nature of those photos which came out this region of northwestern Iraq in 2014 when massacres and rape were omnipresent, today’s imagery is of beautiful and fond farewells, a collage of friendship and hope.

The juxtaposition of humanity and barbarism has manifested itself across the landscape of northern Iraq and Syria in recent years as a fight between the forces of revolution and reaction. While on the one hand, the Kurdish-led freedom movement has advanced a program of inclusiveness, solidarity, and grassroots democracy, the Salafist ideology has pushed for a monolithic, exclusionary and genocidal alternative.

For years, this struggle has played out in its most acute form in Rojava (predominately Kurdish northern Syria) as a fight between the militants of the People’s and Women’s Protection Units (YPG/J) and the so-called Islamic State. Ironically, although the two groups’ worldviews couldn’t be more different, they did share at least one common conception: the fluidity of borders.

While the YPG/J saw the nation states of the region as the anti-thesis to people’s power, and thus advocated autonomy within them as well as assemblies to connect self-governing communities across borders, IS saw their proposed caliphate as stretching across the entirety of the region. In one of their more famous propaganda videos, they declared the Iraqi-Syrian border null and void, as well as that of the notorious Sykes-Picot Agreement that had divided up the former Ottoman territories between France and Britain.

It was this crumbling of the nation states that paved the way for the struggle between Kurdish revolutionaries and the fascists of IS to play out not only in Syria, but in Iraq. While IS was attacking Kobane in Rojava in the late summer of 2014 with the intention of turning it into “Ayn al-Islam” and crushing the Kurdish identity in word and deed, the black-clad fascists were also on the march in Iraq.

IS Marches Into Shengal

Having already captured the predominately Arab city of Mosul to the shock of the world in a blitz campaign in July 2014, the group’s attention then turned to Shengal.

The genocide that unfolded against the Yazidi community in light of the August 3, 2014 takeover of the city by IS finally brought the attention of the so-called ‘international community’ to the brutality of IS. With up to 200,000 people forced to flee, and an estimated 50,000 Yazidis trapped on Mount  Sinjar facing the prospect of dying of thirst, western powers caved to tremendous international pressure and entered into operations in the area to assist with the rescue of these civilians. Although for years the brutality of IS had been fostered by these very governments in an effort to undermine the Syrian government, they now attempted to position themselves as defenders of humanity.

While the Yazidis faced seemingly imminent death and unspoken brutality, the West’s client force in the Kurdistan Region of Iraq, the Kurdistan Democratic Party (KDP, or PDK), proved itself either unwilling — or horribly ineffective — at coming to the defence of their Kurdish brothers and sisters. This passivity brought renewed shame onto the party of Massoud Barzani, and revealed its feudal-reactionary character.

This spurred the guerrillas of the Kurdistan Workers’ Party (PKK) into action. From their bases in northern Iraq, it was the men and women of the PKK’s armed wings HPG and YJA-Star who put their bodies on the line to free Yazidi women from captivity, and their children from growing up as slaves – or to not grow up at all.

IS was pushed out of Shengal in large part by the coordinated efforts of the PKK, as well as their comrades in the YPG and YPJ who crossed the border to aid in the area’s liberation. The horrors of that period are unbearable to even hear about – one can only imagine the gravity of the pain and trauma that still grips those who lived through this epoch.

In the aftermath of the nightmare came the realisation of a truly free life. This didn’t mean the return to the kind of life that previously existed within the Kurdistan Regional Government (KRG) or the Iraqi state, but a way of organising society so that the ordinary people could play a decisive role in determining their destinies.

The ideology of democratic confederalism that has been placed into the globe’s rich battle of ideas by PKK founder Abdullah Ocalan now reached new terrain. Although the presence of the PKK and YPG/J was always supposed to be temporary, new self-defence forces were trained that would ensure that the Yazidi community would be well equipped – both militarily and politically – to be able to withstand any future attempts to kill their way of life.

The Shengal Resistance Units (YBS) had already been formed previous to the IS onslaught against the region, but the battle for liberation now brought them renewed prominence and major growth. As in all formations of the Kurdish Freedom Movement, the Yezidis proclaimed a separate women’s militia, the Yezidi Women’s Units (YJE).

As revenge for the brutality inflicted on Yezidi women during the dark days of 2014, these forces travelled to the frontlines of Raqqa during the battle to end the rule of the IS pseudo-caliphate once and for all and raised their flag over the city.

Erdogan Picks Up Where IS Left Off

When Turkish President Recep Tayyip Erdogan announced his government’s invasion of Syria in late January, he didn’t hold back in verbalising how broad his plans for the occupation of Kurdish lands were. He spoke not only of taking Afrin, but in clearing the entire border region stretching across the whole of Syria and Iraq.

With Afrin now under Turkish occupation, Erdogan has stated very matter of factly that the region will be governed according to Ankara’s diktat. There isn’t to be any semblance of Syrian Arab control, never mind Kurdish identity. The aftermath of the Neo-Ottoman invasion means that the AKP government’s desire for Afrin to become part of the Hatay Province appears more realistic than at any other point.

If Afrin showed how Erdogan intended to pick up where the Islamic State left off in northwest Syria, demolishing what was one of the most peaceful cities in the country prior to two and half months ago, his statements on Shengal reveal that he really is hell-bent on rescuing the IS mission.

In late March, as reports had spread that the PKK would soon leave Shengal, Erdogan quipped that, “We said we would go into Sinjar. Now operations have begun there. The fight is internal and external…we may turn up in Sinjar suddenly one night and clean up the PKK there,”

The PKK has now withdrawn its forces from Shengal, but it’s evident that this means very little to Erdogan. After all, the basis for Ankara’s invasion of Syria under the sick name of ‘Operation Olive Branch’ was that the YPG/J-linked Democratic Union Party (PYD) was one in the same as the PKK.  No doubt, the Turkish state sees any group or self-defence units who support the ideology of Ocalan and democratic confederalism as nothing more than the PKK in different fatigues.

The future for the Yazidi people of Shengal is as unpredictable as it is for any oppressed Kurdish community across the four parts of their historic homeland. IS has been defeated, but it’s clear that its principal client state – the Turkish Republic – isn’t done with putting a modified version of their ambitions to ethnically cleanse Kurdish lands into practice.

Worrying for the free life project of the Yazidi community is also the attitude of the reactionary KDP and the Iraqi central government to any semblance of autonomy. Speaking with Rudaw in late January, Iraqi Prime Minister spokesman Saad al-Hadithi said that the government would aim to bring the area back under its control, saying, “There was an initial agreement between the federal government and the Kurdistan Region to form a joint force from the Iraqi army and the Peshmerga to extend control and enforce law and order in a comprehensive way in Shengal and the areas around it.” In this sense, the Baghdad government, the KDP, and the Turkish state’s interests all align.

One only needs to take a brief glance at the images of the PKK’s entrance and withdrawal from Shengal to understand the impact that the guerrillas have had on the people of this community.

Writing for ANF, Medya Doz said of the arrival of the guerrillas in 2014 that, “They were all sorrowful, furious and extremely proud. Most of them had their weapons, and some bread and water. They gave life to whoever they were able to reach. They protected the people with their weapons, and gave water to the parched lips of children. They made bread from their souls for the hungry. They gave hope to eyes opened wide with terror, fearing death. They touched thousands of people and gave them a mountain of faith in themselves and what is beautiful.“

Three and a half years later, Medya writes about the withdrawal of the last of the HPG and YJA-Star fighters on April 1, speaking about a Kurdish grandmother who promised the guerrilla that the cemetery of the fallen would be looked after. She was quoted as having said, “We will look after the martyrs now, they come before our own children, we will take care of them all. You leave today with the clothes you had when you came. You have no possessions but your backpacks and your weapons, and so much love. You are the derwishes (the derwish’s focus is on the universal values of love and service, deserting the illusions of ego) of our hearts, clean as the running waters. You brought along bread, water and your pure hearts. Now we bid you farewell with roses and prayers to Tawusî Melek.”

These truly beautiful words illuminate both the past and the present. It is the ethical and humane values of the guerrilla forces that have resonated so much with the people of Shengal. Their spirit of absolute self-sacrifice meant that hundreds of them became martyrs within days of arriving from the mountains. It is the unfortunate reality that the history of the Yazidi and Kurdish people is one of such necessary heroism, and also such common martyrdom.

This will of a guerrilla force whose hearts and spirits are embedded with values reflective of the best that humanity has to offer can never truly lose. Individual battles may be lost, of course. In the present reality, Afrin appears to have fallen. However, the pivot of the YPG/J to its more natural form of warfare – that of the guerrilla combatant – and the enduring desire to liberate every bit of territory from the grip of fascists, will guarantee victory at the end of the day. Shengal will continue to breathe free as long as the men and women armed with rifles and roses defend this land at all costs from any fascists, whether carrying black flags or Turkish ones.