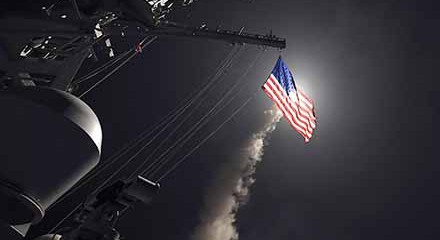 Irrespective of what the experts from the Organisation for the Prohibition of Chemical Weapons say, there is no doubt that the Syrian dictator is capable of using weapons of mass destruction against his own population and it is possible that Bashar al-Assad was responsible for the attack in Douma.

However, the point remains that the tripartite alliance of the US, UK and France has failed to prove that the Syrian government was responsible for this terrible act before launching a military attack. In addition, after all the fake documents produced prior to the Iraq war, can anyone trust the advice of international ‘experts’? There is a level of justified scepticism amongst ordinary people about British government claims of being certain who was behind the ‘chemical attack’ used to justify the military operations of April 14.

In the current situation, when Assad is clearly winning the eight-year civil war, why would he use chemical weapons on a small group of fundamentalist Islamists, Jaysh al-Islam (an offshoot of Al Qa’eda)? After all, his government, aided by Russia and Iran, has managed to defeat the other offshoots operating in Syria and, what is more, in Douma a deal had been reached that paved the way for the departure of the insurgents.

As late as April 12, US defence secretary James Mattis was telling reporters that the United States and its allies were “still assessing” reports of a chemical weapons attack on April 7 – days after his boss, Donald Trump, and British prime minister Theresa May had declared they knew what had happened and firmly blamed Assad.

Unlike Labour leader Jeremy Corbyn and elements in the Stop the War Coalition, I have no illusions in the United Nations and the sanctity of ‘international law’. However, it is interesting to read the case made by US law professors Jack Goldsmith and Oona Hathaway against military intervention:

The strike is ‘necessary to enforce the prohibition on the use of chemical weapons’. Each of the leaders of the three states that carried out the strikes … made some version of this argument in their statements to the public … The problem with this argument is that the 1997 Chemical Weapons Convention … provides an enforcement system that the three powers … entirely bypassed. The convention provides, first, for investigation by the experts from the Organisation for the Prohibition of Chemical Weapons … Then, in situations of “particular gravity”, the [OPCW] may bring a matter to the attention of the UN general assembly and security council. Nowhere does the convention provide for unilateral uses of force in response to a breach of the convention.1

A different explanation of what happened on April 7 comes from reporter Robert Fisk. On April 16, he visited Douma and spoke to doctors at the hospital shown in the films widely shown of victims of the ‘chemical attack’. Fisk writes: “There are the many people I talked to amid the ruins of the town who said they had ‘never believed in’ gas stories – which were usually put about, they claimed, by the armed Islamist groups.” He quotes a doctor, who told him:

I was with my family in the basement of my home three hundred metres from here on the night … There was a lot of shelling – aircraft were always over Douma at night – but on this night there was wind, and huge dust clouds began to come into the basements and cellars, where people lived. People began to arrive here suffering from hypoxia, oxygen loss. Then someone at the door, a ‘White Helmet’, shouted ‘Gas!’ and a panic began. People started throwing water over each other.

Contrary to the trolls on social media, Fisk is not an Assad supporter and he warns readers this doctor referred to the armed groups as ‘terrorists’ and could be a government supporter. However, as Jonathan Cook rightly points out,

Fisk’s report shows that there is a highly credible alternative explanation for what happened in Douma – one that needs to be investigated. Which means that an attack on Syria should never have taken place before inspectors were able to investigate and report their findings.

As soon as I walked into the BBC Persian TV studios on April 14 to give an interview about the air raids, I became aware that for the three days prior to the air attack people in Syria, Lebanon and to a certain extent Iran had expected a major attack and therefore were relieved when Trump (in true Bush style) announced ‘mission accomplished’. The cruise missile attack was far more limited than expected – and in fact it probably served to strengthen the Assad regime, which came out of it unscathed.

On the European scene we witnessed the rather pathetic competition between Macron and May over who will be Trump’s preferred poodle in Europe. May had very good reason to welcome the distraction. By talking tough she is trying to regain the ground she lost after last year’s general election campaign, when the slogan, ‘Strong and stable’, needed to be replaced by ‘Weak and wobbly’. Macron too, faced with trade union and student resistance to his neoliberal economic policies, was also pleased with the distraction.

As for Trump himself, what better way to divert attention from the enquiry into ‘Russian interference’ in the 2016 presidential election? At times it feels like we are all watching a movie – and a very poor one at that. The upholders of ‘democracy’, ‘civil society’ and ‘progress’ decided to launch cruise missiles on the say-so of an Islamist fundamentalist group supported by Saudi Arabia?

The claimed targets were possible ‘chemical weapons plants’ as well as military airfields, etc. But, according to CBS News,

One of the targets of US-led coalition air strikes in Syria was still smouldering late Saturday afternoon, reports CBS News’ Seth Doane, the only American network correspondent inside Syria. The US military says the Barzeh complex in Damascus was a “centre for the research, development, production and testing of chemical and biological weapons”. Scientist Sayed said his office was there …

He said it’s “totally incorrect” that chemical weapons were being developed there: “The … OPCW visited here and didn’t report anything wrong with this place” … A package on the side of the road is anti-venom, which Sayed says is what they were producing.2

Over the last two weeks we have also witnessed two (according to some, three) raids into Syria by Israeli planes. The targets have probably been more significant than the ones chosen by US/UK/France – military bases where Iranian Revolutionary Guards are active both as advisors and trainers, but also as fighters. We know a number of Iranians have died in these attacks, because their bodies were returned to Iran and funerals conducted.

Most commentators agree that the strikes have not changed the balance of forces in Syria and there is no sign of the “big price” with which Trump has threatened Iran and Russia.

According to Trump’s opponents, the White House has no strategy in the Middle East except reacting to events as they unfold and stumbling from one position to another. But others believe there is a precise plan unfolding. It has various aspects, but they all have one single aim: ‘regime change from above’ in Iran. In other words, every time you hear a statement about Syria, it is really about Iran. The plan is to weaken Iran militarily in Syria, expose the weaknesses in its support for Assad, and warn Russia off siding with Tehran in the way it has defended the Syrian dictator.

Simultaneously the idea has been to weaken Iran politically and economically by withdrawing from the nuclear deal – a measure that will undermine the Islamic Republic’s fragile economy further (deals with Iran will be strongly discouraged by the threat of multi-million-dollar fines). According to this scenario, economic collapse will encourage public discontent and the regime will veer towards collapse. This is said to be linked to Trump’s policy of provoking Iran and Hezbollah into confrontation with Israel, providing an excuse for a full-scale attack on Iran. However, to the constant frustration of Iranian supporters of ‘regime change’ helped along by the west, the Shia state in Tehran is showing unprecedented restraint outside its borders.

In the meantime, uncertainty continues and the victims are the peoples of the Middle East, not least in Syria itself. The survival of Assad, on the one hand, and a pro-Saudi or pro-Turkey opposition taking power, on the other, look as bad as each other.