Gaza’s “Great March of Return”: an international rallying call for peace and justice 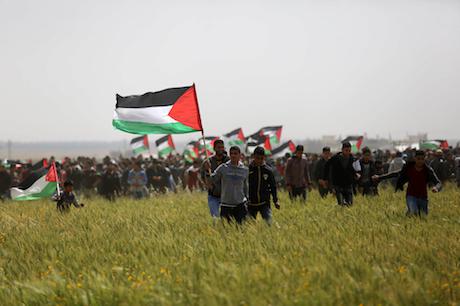 In 2015, a Guardian editorial said that “The right of assembly in a public place is truly one of the cornerstones of liberty – a right to bear witness and bring peaceful pressure to bear on rulers and the public in support of a cause”.

Now, consider the carnage at Gaza’s border with Israel where, on 30 March, tens of thousands of men, women and children joined the ‘Great March of Return’, a six-week protest to culminate with the anniversary of the Nakba (Catastrophe), the ethnic cleansing of 700,000 Palestinians in 1948.

The ‘Great March of Return’ began on the anniversary of ‘Land Day’ when six Palestinians were killed in 1976 while protesting the confiscation of large tracts of their land. That injustice has been compounded by another on a greater scale with 39 Palestinians killed to date and 4,000 injured as Israeli deployed snipers used live fire on unarmed protesters.

While the Israeli military claimed the use of live ammunition was needed to prevent the ‘mass infiltration’ of their border, human rights organisations have condemned Israel’s use of lethal force as pre-meditated and illegal.

B’tselem, the Israeli human rights organisation, said that “The use of live ammunition against unarmed persons who pose no danger to anyone is unlawful”, adding that “as long as soldiers in the field continue to receive orders to use live fire against unarmed civilians, they are duty-bound to refuse to comply”.

Israel has also been condemned by Fatou Bensouda, Prosecutor of the International Criminal Court, who in a statement on the killings in Gaza said “Violence against civilians – in a situation such as the one prevailing in Gaza – could constitute crimes under the Rome Statute of the International Criminal Court”. She added that her office would continue to monitor the situation in Gaza and that incitement or engagement in violence is “liable to prosecution before the court”.

A 30-year-old photographer, Yaser Murtaja, was shot in the chest on 6 April despite clearly wearing a ‘PRESS’ jacket and later died from his injuries; an additional six journalists were injured by live fire. Shamefully, the Israeli security apparatus has tried to smear Yaser Murtaja as “an officer in the Hamas security apparatus in Gaza”.

This account was entirely refuted by Jan Egeland, Secretary General of the Norwegian Refugee Council, which had worked with Mr Murtaja and said that he “was a civilian and a journalist”… who “wanted to document civilians exercising their right to peacefully protest.”

Israel is deploying a powerful military apparatus on a defenceless, unarmed population that is using the most fundamental and enduring form of protest that has sustained progressive change for generations; non-violent direct action.

From Black Lives Matter to the Anti-Apartheid Movement in South Africa and, looking further back, to the Suffrage Movement in Britain which celebrates its centenary this year, the protest movement has been a touchstone of democracy. Israel’s targeting of civilians and the press suggests a state at odds with fundamental democratic freedoms.

Gaza’s two million people have been pushed beyond endurance, subjected to an eleven-year economic siege that has choked off the economy and created the highest unemployment rate in the world.

An 11-year-old child in Gaza has witnessed three wars and experienced unrelenting poverty in a territory where more than half the population are refugees dependent on humanitarian assistance.

According to Save the Children, 90 percent of Gaza’s drinking water is unfit for human consumption, electricity is available for just 2-4 hours per day, water-borne diseases are spiking, health and emergency services are breaking down and fresh food unavailable because of a lack of refrigeration.

With 60 percent of Gaza’s under-25s unemployed, it is unsurprising to find so many young people on the front line in the protests for change; bereft of hope, income, the opportunity to travel and feeling isolated from the wider world.

Gaza’s civil society has seized upon the ‘Great March of Return’ as an opportunity to rally international support and momentum toward lifting the siege which is at the root of so many social and economic ills in the territory.

It is also a reminder to the world that two-thirds of Palestinians in Gaza are direct descendants of the refugees who lost their land in 1948 and have a right to return to their ancestral homes.

The concern of civil society groups standing in solidarity with Gaza is that Israel could use the march as a pretext for yet another onslaught on the territory.

Israel’s chief military spokesperson, Brigadier General Ronen Manelis has suggested that if the protests continue “Israel will expand its reaction to strike the militants behind it”. Such a scenario should be opposed by governments and civil society movements across the world.

Next month, the United States is cutting the ribbon on the site of a new embassy in Jerusalem; a move that appears to dash hopes of a Palestinian state with its capital in East Jerusalem. And the US has also slashed its aid to the UN mission in Palestine which is adding further misery to a vulnerable, marginalised population.

With a political solution to the crisis in Gaza a seemingly distant prospect, the only possible route for progress is the mobilisation of civil society groups across the world standing in unity with Palestinians.

Stephen McCloskey is Director of the Centre for Global Education, a development non-governmental organisation based in Belfast. He is editor of Policy and Practice: A Development Education Review, an online, open access, peer reviewed journal. He is co-editor of From the Local to the Global: Key Issues in Development Studies (Pluto Press, 2015). He manages education projects for young people in the Gaza Strip and writes regularly on a range of development issues for books, journals and online publications.