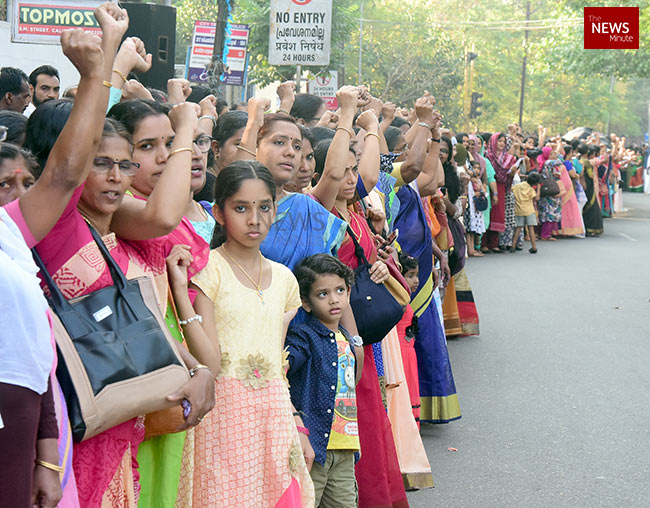 On Jan. 1, 5.5 million women in the Indian state of Kerala (population 35 million) built a 386-mile wall with their bodies. They stood from one end to the other of this long state in southwestern India. The women gathered at 4 p.m. and took a vow to defend the renaissance traditions of their state and to work towards women’s empowerment. It is not an exaggeration to say that this was one of the largest mobilizations of women in the world for women’s rights. It is certainly larger than the historical Women’s March in Washington, D.C. in 2017.

Kerala’s government is run by the Communists. It is not easy for a left-wing government to operate in a state within the Indian union. The Central Government in New Delhi has little desire to assist Kerala, which suffered a cataclysmic flood last year. No assistance with the budgetary burdens of relief and reconstruction, and no help with financing for infrastructure and welfare services. The Communist government has a wide-ranging agenda that runs from its Green Kerala Mission — a project for stewardship of the state’s beautiful environment — to its fight for women’s emancipation. The Left Democratic Front government believes that dignity is a crucial a goal as economic rights, and that it is centrally important to fight against everyday humiliation to build a truly just society.

Over the course of the left’s government in Kerala, it has pushed ahead the agenda against everyday humiliation. For instance, in 2017, the government provided free sanitary pads for young women in school. The logic was that during their periods, young women who could not afford sanitary pads avoided school. Prejudices against menstruation had become a barrier to equal education. The government called this project “She Pad,” which benefited students and teachers. Pinarayi Vijayan, the Chief Minister of Kerala, said of the effort, “Menstrual hygiene is every girl’s right. The government is hoping that initiatives like these will help our girls to lead a life of confidence.”

A hundred miles north of Kerala’s capital — Thiruvanthapuram — sits a temple for Ayyappan, a celibate god. Women between the ages of 10 and 50 had not been permitted into the temple due to a belief that the celibate god would not be able to tolerate women who menstruate. The Indian Supreme Court took notice of this and, in September 2018, declared that the temple must allow all women to enter. The Left Democratic Front government agreed with the courts. But the temple authorities, and the far-right groups in the state, disagreed. When women tried to enter the temple, the priests blocked them, assisted by the far right. The situation was at a deadlock.

Chief Minister Pinarayi Vijayan called upon progressive organizations across the state to start mobilizing the citizens toward the building of a Women’s Wall (Vanitha Mathil) on Jan. 1. The energy in the state was electric. Women gathered at hundreds of mass meetings across the state. They recognized immediately that this was not a fight only to enter a temple, but this was a fight principally for women’s emancipation, for the right of women, as Vijayan had said, “to lead a life of confidence.”

The public meetings in November and December galvanized the opposition to the far right, arguing that women have every right to enter public spaces, including religious buildings. January began in anticipation. Women had been organized by districts and knew where to go. Women of all ages and backgrounds, from schoolteachers to members of the fishing community, began to line up around 3 p.m. After taking an oath, they marched through their towns and cities. They exuded joy and confidence, a freedom that should warm the hearts of sensitive people.

Strikingly, the media outside India paid little attention to this global, historical event. Press coverage in the United States was nearly absent. Internationalism in our time is such a façade, with so little care to amplify the bravery of people around the world. When the Women’s March took place in Washington, D.C., newspapers in Kerala reported it in detail. The favor was not returned. Silence was the answer.

Two days after the Women’s Wall, the right-wing in Kerala went on a rampage. Their members attacked the leaders on the left and threw bombs at government buildings. Over 700 people — mostly men on the far right — were arrested that day.

Walking down a main shopping street in Thiruvanthapuram, I see visible signs of the far-right’s attack. On one side of the street are posters and signs of left organizations torn and broken during the day of rampage by the far right. On the other side of the street, far-right supporters sit on a hunger strike.

Even liberals have taken the side of the far right. One liberal politician said that while he favored women’s rights, he also favored the temple’s rights. But the temple has no rights, nor does tradition. As Gandhi wrote almost a hundred years ago, “If I can’t swim in tradition, I’ll sink in it.” Neither the temple nor tradition trumps the rights of women to live with confidence. If a tradition is discriminatory, it deserves to be set aside.

There are no half measures in this debate in Kerala. The mood is that one must not walk away from one’s principles.

5.5 million women in Kerala — one in three women in the state — took to the streets to champion the emancipation of women. What brought them to join the Women’s Wall was that the Left Democratic Front government took a clear position, a principled position: that menstruation should not be used as a penalty against women’s full participation in society. Clarity defines the struggle. It is a lesson worth learning around the world.