A Bit of Hope That Doesn’t Come from Miami 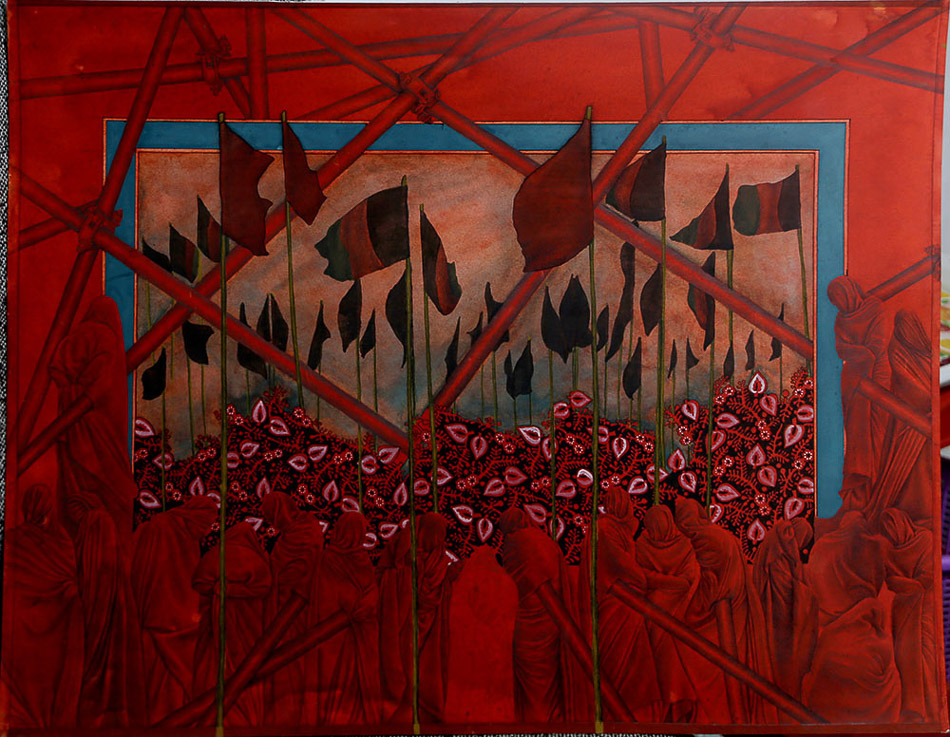 After twenty years, the United States government – and the forces of the North Atlantic Treaty Organisation (NATO) – will depart from Afghanistan. They said that they came to do two things: to destroy al-Qaeda, which had launched an attack on the United States on 11 September 2001, and to destroy the Taliban, which had given al-Qaeda a base. After great loss of life and the further destruction of Afghan society, the US departs – as it did from Vietnam in 1975 – in defeat: al-Qaeda has regrouped in different parts of the world, and the Taliban is set to return to the capital, Kabul.

The speaker of Afghanistan’s parliament, Mir Rahman Rahmani, warns that the country is poised to enter a new period of civil war, a repeat of the terrible civil war that ran from 1992 to 2001. The United Nations calculates that in the first quarter of 2021, civilian casualties rose by 29% compared to last year, while the number of women casualties increased by 37%. It is unclear if there will be further talks between the Taliban, the Afghan government of President Ashraf Ghani, the Turks, the Qataris, the United States, and the United Nations. Afghanistan sits on the brink of further violence, whose impact can so aptly be described by the words of the poet Zarlasht Hafeez:

The sorrow and grief, these black evenings,
Eyes full of tears and times full of sadness,
These burnt hearts, the killing of youths,
These unfulfilled expectations and unmet hopes of brides

‘Saving’ Afghan women, advancing the cause of human rights: these words have lost meaning after two decades. As Eduardo Galeano put it, ‘Every time the US “saves” a country, it converts it either into a madhouse or a cemetery’.

The US government calculates that this war, which would enter its twentieth year, is the longest US war in the modern period (the US engagement in Vietnam lasted for fourteen years, from 1961 to 1975). But this war in Afghanistan is not the longest war prosecuted by the United States government. There are two US wars that continue: a war against the Democratic People’s Republic of Korea or DPRK (since August 1950) and against Cuba (since September 1959). Neither of these conflicts have ended, with the US continuing to execute hybrid wars against both the DPRK and Cuba. A hybrid war does not necessarily require the full arsenal of a military to come into force; it is a war fought through the control of information and financial flows as well as the use of economic sanctions and illicit means such as sabotage. There is no question that the longest and unfinished US wars have been against Korea and Cuba.

Sixty years ago, on 17 April 1961, the CIA’s Brigade 2506 landed at Cuba’s Playa Girón (‘Bay of Pigs’). The Cuban people resisted this invasion as they would six decades of hybrid war against their sovereign revolutionary processes. Cuba has never threatened the United States; it never has violated the UN Charter of 1945. The United States, on the other hand, has routinely threatened the Cuban people. In October 1962, when the Soviets sent a missile cover to protect Cuba, General Maxwell Taylor, the head of the US Joint Chiefs of Staff, planned for a full-scale invasion. In this now-declassified memorandum, Taylor pointed out that such a military venture might result in 18,500 casualties on the US side because of the determination of the Cubans to protect their land and their political project. The plot was to reinstate the old Cuban oligarchy that had sought refuge in Miami and turn Cuba back into a gangster’s paradise.

After the Cuban government sent troops to assist the national liberation project in Angola in November 1975, US Secretary of State Henry Kissinger told his team on 24 March 1976, ‘if we decide to use military power, it must succeed. There should be no halfway measures – we would get no award for using military power in moderation. If we decide on a blockade, it must be ruthless, rapid, and efficient’. The US planned to mine Havana’s harbour and bomb Cuba’s cities. ‘I think we are going to have to smash Castro’, Kissinger told US President Gerald Ford. Ford replied, ‘I agree’. Such is the attitude of the US government, from 1961 to the present.

Before he left office in January 2021, US President Donald Trump placed Cuba on the US government’s ‘state sponsors of terrorism’ list. Seventy-five US lawmakers asked his successor, President Joe Biden, to reverse this decision. On 16 April, Biden’s press secretary Jen Psaki told the briefing room that ‘A Cuba policy shift or additional steps is currently not among the President’s top foreign policy priorities’. Biden, in other words, has decided to passively continue Trump’s policy, dictated to him by the likes of Republican Senators Marco Rubio and Rick Scott from Florida and Senator Ted Cruz from Texas (as well as Democratic Senator Robert Menendez from New Jersey). Biden has opted to persist in this cruel six-decade long policy to suffocate the Cuban people.

Just after the 1959 Cuban Revolution, the US government made it clear that it would not tolerate a sovereign Cuba only 145 kilometres from Florida’s coast. Cuba’s commitment to people over profit is a standing rebuke of the hypocrisies of the United States rulers. This has been clarified once more during this pandemic, during which the infection and death rates per million are strikingly higher in the US than in Cuba (recent figures indicate the US has recorded 1,724 deaths per million, whereas Cuba stands at 47 deaths per million). While the US locked itself into vaccine nationalism, Cuba’s Henry Reeve Brigade of doctors continued with their work amongst the world’s poorest people (for this, of course, they deserve the Nobel Prize for Peace).

Unable to successfully invade Cuba, the US has persisted with a tight blockade of the island. After the fall of the USSR, which had provided Cuba with ways to circumvent the blockade, the US attempted to tighten its grip on the island. US lawmakers then attacked Cuba’s economy through the Cuban Democracy Act (1992) and the Cuban Liberty and Democratic Solidarity Act (1996) – both laws with names that demean the words in them. From 1992 onwards, the UN General Assembly has voted overwhelmingly for the United States to end this blockade. A group of UN Human Rights Council Special Rapporteurs wrote a statement calling on the US to withdraw these measures, which have only made Cuba’s attempt to fight the pandemic harder.

The Cuban government reported that between April 2019 and March 2020, Cuba lost $5 billion in potential trade due to the blockade; over the past almost six decades, it has lost the equivalent of $144 billion. Now the US government has deepened the sanctions against shipping companies that bring oil to the island. The head of US Southern Command, Admiral Craig Faller, described Cuba’s medical internationalism as a ‘regional corrosive influence’. There is cruelty in Washington.

Far from the bitterness of the US government, the Cuban communists held their eighth Party Congress, where the discussion was on how to improve the state enterprises and how to innovate to meet the aspirations of the Cuban people. Deputy Prime Minister Inés María Chapman said that the party members must be active in their communities to build and defend socialism. Rafael Santiesteban Pozo, president of the National Association of Small Farmers, said that working people must produce more with what resources are available. Minister of Economy and Planning Alejandro Gil pointed to the need for greater efficiency in the state enterprise system, the expansion of self-employment, and the expansion of cooperatives.

These are serious people who recognise the problems but are not overwhelmed by them; they are part of a project that has fought to defend its sovereignty against enormous odds since 1959. Defeat is not in their vocabulary. Their agenda is hopeful, unlike the bilious agenda that comes from the US government and the Miami-based Cuban oligarchy.

At this Congress, Raúl Castro stepped down from his post. Castro, one of the original Cuban revolutionaries, had been imprisoned for his role in the Moncada uprising of 1953. Upon his release, he went to Mexico with his brother Fidel and then returned on the Granma to lead the rebellion against the US-backed dictator Fulgencio Batista. After the victory of the Revolution, Castro served in the government and as a leader in the Communist Party, guiding it alongside Fidel and others through the difficult Special Period (1991-2000) and then continuing to lead it after Fidel’s death in 2016. His quiet role in defending and elaborating the Cuban Revolution has been immense.

After the Playa Girón attack by the CIA, the Spanish poet Jaime Gil de Biedma wrote a poem about Cuba called ‘During the Invasion’ (collected in Moralidades, 1966). The Venezuelan poet Diego Sequera translated this poem for us as we celebrate the 60th anniversary of the defeat of the US on those beaches:

The morning newspaper is open on
the tablecloth. The sun glows in the glasses.
Lunch at the small restaurant,
a working day.

Most of us remain silent. Someone speaks with an elusive voice;
these are conversations with special sorrow
about the things that always happen and
that never end, or that end in disgrace.

I think that at this time of day, the sun rises in Ciénaga;
nothing is yet decided, combat doesn’t stop,
and I look in the news for some hope
that doesn’t come from Miami.

Oh, Cuba in the distant dawn of the tropics,
when the sun is simmering, and the air is clear:
may your land sow tanks and your broken sky
be grey from the wings of airplanes.

With you are the people of sugar cane,
the man of the streetcar, those from the restaurants,
the thousands of us that today search in the world
for a bit of hope that doesn’t come from Miami.

Hope comes from the warm sun of Cuba.