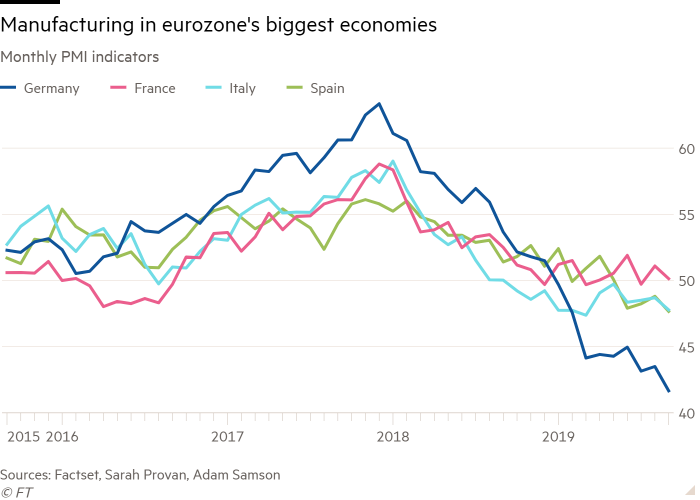 As we enter October, the global recession is with us – in manufacturing.  The PMI manufacturing activity indexes for most of the major economies are below 50, the threshold for expansion or contraction.  These are only surveys of corporate managers asking them about production, sales, employment etc.  But PMIs have been reasonably accurate indicators of actual industrial and manufacturing output, the data for which follow somewhat later.

In September, the manufacturing PMI for the Eurozone fell to its lowest level since the euro debt crisis of 2012, led by Germany but followed by the others.  So much for the success of Mario Draghi’s reign as ECB President.

In Japan, it is a similar story.  Sentiment among Japan’s large manufacturers fell to its lowest level in more than six years in the third quarter, according to a key survey conducted by the Bank of Japan.  And Japan’s manufacturing PMI is back to the level of contraction in the sector last seen in the mini-recession of 2016

And of course, pre-Brexit Britain’s manufacturing sector has already been ‘in a ditch’, to use PM Boris Johnson’s phrase, for several months.

To complete the G7, Canada’s PMI is also below 50.

And as for the fastest growing major economies in the world, China and India, they are both experiencing their slowest real GDP growth rates for over a decade, while their manufacturing sectors are just above the water line.

Both have seen a catastrophic collapse in production, foreign investment and in the value of their currencies.  Turkey has been thrown in a deep overall recession.  Argentina has been forced to default on its huge foreign debt payments.  As the country heads to a general election this month, bond holders are desperately trying to find ways of avoiding a severe ‘haircut’ on their holdings.

But so far, the recession is limited to the manufacturing sector.  And manufacturing constitutes no more than 10-40% of most economies. The so-called services sector that includes retail, financial services, business services, real estate, tourism, ‘creative industries’, etc continues to keep its head above the water in most G20 economies.  There is not one G20 economy with a services PMI below 50.

And this why an economy like Greece, which was devastated in the global recession and euro debt crisis, is now able to report a modest 2% a year growth in GDP.  Tourism and leisure services, a key component of the Greek economy, continues to expand.  But a 2% growth rate is not much after a 25% contraction during the crisis.  The Greek recovery has been weak. Five years after the 1933 nadir of the Depression, US GDP per capita had risen by 35 per cent. Five years after the depths of Argentina’s 1998-2002 crash, GDP per capita was up by 45 per cent. But from 2013 to 2018, Greece’s GDP per capita rose by less than 6 per cent. Indeed, Oxford Economics predicts Greece won’t recover to its pre-crisis GDP levels until 2033! – and that assumes no global slump in the meantime.  And if the global services sector hits the wall, then Greece will plunge back into recession.

The question is whether the services sector will follow the manufacturing down into a slump.  Some say not because manufacturing is a much smaller sector.

But that argument does not recognise that many services sectors depend on manufacturing for their own expansion.  The spillover from a manufacturing slump has usually been significant in previous recessions.  If global employment growth should weaken or stop, workers’ purchasing power will wane and the services sector will start to suffer as well.  Employment depends on the willingness of capitalist companies to invest and expand.  And investment and expansion depend on the profitability of expected investment  Capitalists gauge that by current profitability – unless they take a risk.

So what is happening to global profits?  Well, JP Morgan economists have just published a full analysis of global profits (unfortunately this report is not available to the public).  And they reckon that global profits in Q2 2019 have stalled. Each of the 10 sectors comprising the total market show a sharp slowing in profit growth, with half experiencing outright contractions in profits over the past year (particularly materials and telecoms).  Even those sectors that still have positive profits growth: retail, IT, financials and utilities, profits growth is dropping fast.

JPM reach the ‘surprising’ observation (that Marxist theory and previous empirical evidence could have told them) that “the downshift in global growth over the past year has coincided with an equally impressive deceleration in corporate profits.”

The stagnation in corporate profits globally is still not as bad as the 2016 mini-recession, or of course in the Great Recession or the previous slump of 2001-2, but it is getting there.  In particular, JPM notes that profits growth has declined to zero because profit margins are being squeezed – in other words, the costs of labour (more workers and higher wages) are not being compensated by increased value – the rate of surplus value is falling – a result that JPMorgan reckon “has historically preceded the start of recession dynamics.”

JPM Morgan cites the trade war as the trigger for this and makes the point that business sentiment (the PMIs) are falling in manufacturing because of the profits squeeze, not vice versa.  But the trade war “could also be an ominous portent of weaker earnings yet to come.”

As Marxist theory would predict, slowing or falling profits will eventually mean slowing or falling business investment, and JP Morgan agrees. “The slump in business profits and business sentiment is taking a toll on capital expenditures. Global capex growth has slowed substantially from a six-year high in 2017 to a near stall as of 2H19. It likely also is a contributing factor in the more recent pullback in job growth. The risk is that slowing labor income growth weighs on consumer spending, which then feeds back into business earnings and hiring.”  Exactly.

JPM remain optimistic that rising productivity growth will turn things around.  But that seems wishful thinking if investment keeps falling.

In the past I have highlighted some other key indicators (apart from profits) that can predict a coming outright recession. The most famous one is the so-called inverted yield curve on bonds.  I have explained how that operates in a previous post. Suffice it to say now, that when the yield curve on bonds inverts (and yield on longer maturity bonds fall below yields on short-term bonds) and stays inverted, then a recession follows within a year.  The US curve has stayed inverted since May.

Another indicator is the price of industrial metals, particularly copper, a metal that is used across the board in all sorts of production.  A fall in its price would indicate a slowdown in investment and production in many industries.  In the mini-recession of 2016, the copper price fell to about $200/lb.  In the Great Recession, it fell to $150/lb.  Having risen to $320/lb in early 2018, it has now fallen back to $250/lb.

The world capitalist economy is in a manufacturing recession now, but there are important indicators that the rest of the economy will join manufacturing soon.