The Arab ruling classes in the 1970s – Mohammad Ja’far 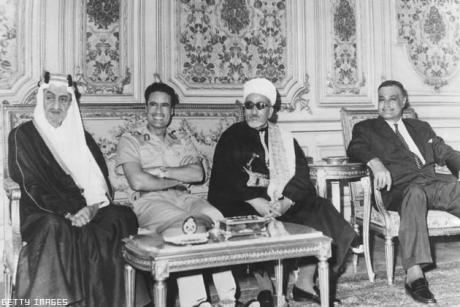 Text of a talk by Mohammed Ja’far on the development of the Arab ruling classes during the 1960s and 1970s, their integration into the world market and the effect this has on the possibility for revolutionary change in the Middle-East.

The Arab ruling classes in the 1970s – Mohammad Ja’far

On 28 April, 1979, a day conference organised by Khamsin was held in Birkbeck College, University of London. The general topic of the conference was Nationalism, Religion or Socialism in the Middle East. The following text is a transcript of the opening talk at that conference.

Looking back over the last decade or so of Middle-East politics, I think there is at least one thing no observer would disagree about: that is the accelerated pace at which dramatic events of a political, social and economic character have been taking place in that part of the world.

Since 1967, not only have there been two major Arab-Israeli wars, the Lebanese civil war, and the Israeli invasion of southern Lebanon, but also we have witnessed the end of pan-Arabism as an important force in Arab politics and the rise and subsequent degeneration of the Palestinian nationalist movement. In addition to a greater frequency of increasingly violent Arab-Israeli confrontations, millions of people have watched on their television sets a major Arab ruling-class politician set out to the Israeli Knesset the terms of an eventual peace treaty. To have gone form the destruction of 1967 to a peace treaty between Egypt and Israel, in which the two countries that have been at war for thirty years open up their borders to the free flow of people, goods and services – this surely is a measure of the scope of the changes which are taking place in this part of the world.

But equally as important as the fact ‘of change itself is the question of who has been in the leadership of these changes. I think the answer to this question is indisputable. It is the Arab ruling classes and not the left, or even the collective weight of the Arab masses, who are primarily responsible for the transformations taking place today in the region. This has been true since the October war at the very least, and in some Arab countries even before. In other words, what I am saying can be summed up as follows: Suppose we could plot the revolutionary activity of the masses in the various Arab countries on a graph; then the curve would have reversed some time in the early 1970s from a generally upward swing to a steeply downward one. And that same curve for the Arab ruling classes, representing the extent to which they are able to mould the societies over which they preside after their own image – that curve has been on the rise in the last few years.

Changes of this order of magnitude demand a response from the left. They do not come frequently in the historical process, and there is certainly nothing comparable to them in the rest of the history of the Middle East. I am referring not only to the Sadat initiative and the Camp David accords, but also to the more general phenomenon of the decline of nationalism as a mobilising political force in the region, as shown not only by the history of Arab nationalism, but for example also by the positive welcome that the Egyptian masses actually gave to the peace tready.

The least that one can say is that a response has not been forthcoming from the traditional left and left-nationalist organisations of the Arab world. Or, if it has, then it has revealed the total and utter bankruptcy of those organisations. The degeneration of the Lebanese civil war into a sectarian communal slaughter, in which at the end all that separated people from life or death at the hands of anyone of the participating organisations was a Moslem or Christian identity card – this surely is a very striking expression of that bankruptcy.

Yet another example is the chorus of calls of ‘traitor’ that accompanied Sadat on his November 1977 vist to Israel, a chorus in which all the organisations of 1he nationalist left and the Palestinian resistance outshouted each other in trying to whip up a climate of nationalist and chauvinist hysteria of the most degenerate variety. The very notion that a representative of the Egyptian ruling class could be a ‘traitor’ to the Arab masses is of course based on the assumption that there is more that unites the Arab left to its ruling classes in face of the zionist state, than divides them. Here we have another measure of the extent of the theoretical degeneration of the Arab left in this period. Insofar as it even exists at all, it can be said to have capitulated completely to the policies of so-called rejectionist regimes like Iraq and Syria.

The ascendency of the Arab ruling classes, on the other hand, is not in this period limited to the political arena. The 1973 oil price explosion has created for the Arab bourgeoisies a potential for expansion and development as a class which they have never had before. The Arab economies and societies, in particular the oil-producing ones, are today undergoing a ferment of change and reorganisation which, no matter how you look at it, is unprecedented in the whole of their modern history. It is these aspects of change that I shall be dealing with in the rest of my talk, but before that I would like to make a final introductory remark.

Revolutionary socialists in the Middle East, and Arab revolutionaries in particular, are today faced with a great theoretical, to say nothing of organisational, challenge. They have to lay the ghost of that body of nationalist thought which has stamped their formation throughout the whole of this century; but they also have to face up to what is actually happening to Arab societies today. For not only have the Arab regimes and ruling classes successfully appropriated the whole of the ideological terrain of the traditional Arab left – I am referring to nationalism – but also they are now embarking on a course of capitalist development involving large scale industrialisation in countries like Iraq and Algeria, massive infrastructural development in Saudi Arabia and the Gulf countries, and an opening up to the international capitalist market of the formerly insular and nationalised economies of countries like Egypt and Sudan. There are important differences between the three categories of countries I have just mentioned: oil producers with large populations, sparsely populated oil producers, and finally the classical backward capitalist economies of Egypt and the Sudan, with large human resources and no oil revenuse. Nevertheless, despite these differences, the general direction of development in all three categories of countries, towards stronger and more deep-rooted ties with the world market, is the same.