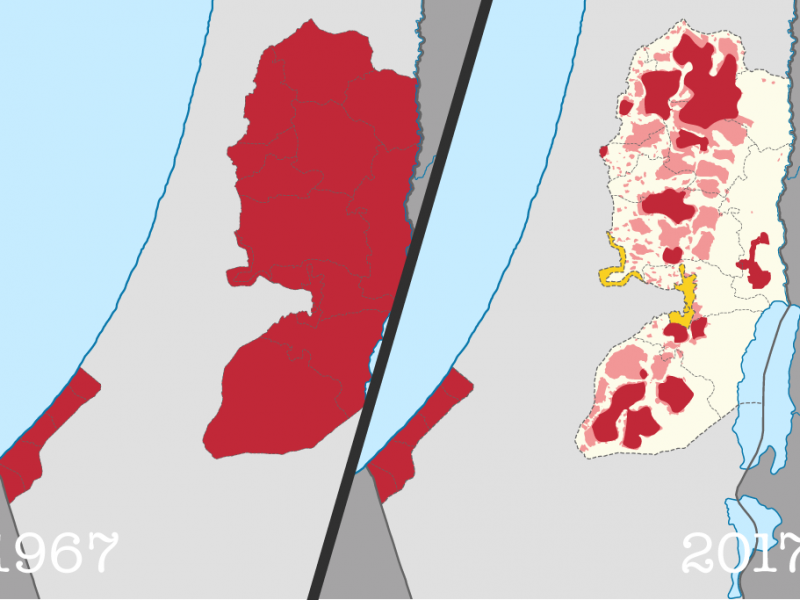 Five years after spearheading what is inaptly referred to as a ‘government of national reconciliation’, Palestinian Prime Minister, Rami Hamdallah, has finally resigned.

“We put our government at the disposal of President Mahmoud Abbas and we welcome the recommendations of the Fatah Central Committee to form a new government,” Hamdallah tweeted, shortly after Abbas had ordered him to dismantle the government.

Since the Palestinian Authority was founded in 1994, 17 governments have been formed, and every single one of them was dominated by the Fatah party, the largest faction within the Palestine Liberation Organization (PLO).

Fatah’s monopoly over Palestinian politics has wrought disasters. Neither did the PA deliver the coveted Palestinian state, nor did Fatah use its influence to bring Palestinian factions together. In fact, the opposite is true.

Most of these 17 governments were short-lived, except that of Hamdallah, which has governed for five years, despite the fact that it failed in its primary mission: healing the terrible rift between Fatah in the Israeli Occupied West Bank, and Hamas in Israel-besieged Gaza.

Moreover, it also fell short of bringing PLO factions closer together. Thus far, the second largest PLO faction, the Popular Front for the Liberation of Palestine (PFLP) refuses to participate in a future government that will also be dominated by Fatah.

Palestinian divisions have never been as pronounced as they are today. While all Palestinian factions, Hamas and Islamic Jihad included, bear part of the blame for failing to unify their ranks and form a single national strategy to combat Israeli colonialism and occupation, Abbas bears the largest share.

Even before becoming a president of the PA in January 2005, Abbas has always been a divisive political figure. When he was the PA’s Prime Minister, between March and September 2003 under the late Palestinian leader, Yasser Arafat, Abbas clashed with anyone who would challenge his often self-serving political agenda, including Arafat himself. His constant clashing with Arafat at the time made him a favorite in Washington.

Abbas was elected on a weak popular mandate, as Hamas and others boycotted the presidential elections. His first, and only term in office expired in 2009. For a whole decade, neither Abbas nor any government of his have operated with the minimum requirement of democracy. Indeed, for many years the will of the Palestinian people has been hijacked by wealthy men, fighting to preserve their own interests while undeservingly claiming the role of leadership.

The 2006 Hamas victory in the Palestinian Legislative Council (PLC) elections was a reminder to Abbas (but also to Israel and the United States) of how dangerous free elections can be. Since then, there has been much talk about the need for new elections, but no sincere efforts have been made to facilitate such a task. Logistical difficulties notwithstanding (for Palestine is, after all an occupied country), neither party wants to take the risk of letting the people have the last word.

Palestine and her people are not only trapped by Israeli walls, fences and armed soldiers, but by their inept leadership as well.

The 2007 Fatah-Hamas clashes which led to the current extreme polarization have split Palestinians politically, between the West Bank, under Abbas’ authoritative control, and Hamas, in besieged and struggling Gaza. While Israeli leader, Benjamin Netanyahu, often complains of the lack of a ‘Palestinian partner’, his government, with the aid of Washington, has done its utmost to ensure Palestinian division.

Several agreements between Fatah and Hamas have been signed, the latest, which appeared most promising, was achieved in October 2017. Palestinians were cautious, then, but also hopeful as several practical steps were taken this time to transfer legal responsibilities from Hamas to the Hamdallah government, whether in the various Gaza ministries, or at the Rafah-Egypt border.

Then, just when the wheels began turning, raising hopes among ordinary Palestinians that this time things were truly changing, Rami Hamdallah’s convoy was attacked as it crossed the main entrance to Gaza, via Israel.

Some sinister force clearly wanted Hamdallah dead, or, at least, it wanted to send a violent message providing the political fodder to those who wanted to stall the political progress between the two main Palestinian parties. Hamas quickly claimed to have apprehended the culprits, while Fatah, without much investigation, declared that Hamas was responsible for the bomb, thus stalling and, eventually, severing all reconciliation talks.

This was followed by clearly orchestrated steps to punish Gaza and push the people in the besieged and war-devastated Strip to the point of complete despair. First, Abbas refused to pay money to the Israeli company that provides some of Gaza’s electricity needs – thus leaving Gaza in the dark; then he significantly slashed salaries to Gaza workers, among other measures.

In response, tens of thousands of Gazans went to the fence separating besieged Gaza from Israel protesting the Israeli siege, which, with Abbas’ latest collective punishment, has become beyond unbearable.

Indeed, Gaza’s ongoing ‘Great March of Return’, which began on March 30, 2018, was a popular response to a people fed up with war, siege, international neglect, but also horrific political tribalism. Since the march began, over 200 Palestinians have been killed and thousands maimed and wounded.

Abbas is now 83-years old with increasingly debilitating health. His supporters within Fatah want to ensure a political transition that guarantees their dominance, because political monopoly offers many perks: wealth, privilege, power and prestige. For Fatah, Hamdallah and his ‘reconciliation’ government have ceased to serve any purpose. Additionally, a unity government with other Palestinian groups at this crucial, transitional period seems too risky a gamble for those who want to ensure future dominance.

The tragic truth is that all such politicking is happening within the confines of Israeli military Occupation, and that Israeli fences, walls, trenches, illegal Jewish settlements and Jewish-only bypass roads encircle all Palestinians, from Gaza to Jericho, and from Jerusalem to Rafah; that no Palestinian, Abbas included, is truly free, and that all political titles hold no weight before the power of a single Israeli sniper firing at Palestinian children at the Gaza fence.

Palestinians do need their unity and urgently so, not expressed in mere political compromises between factions, but the unity of a people facing the same brutal and oppressive enemy.