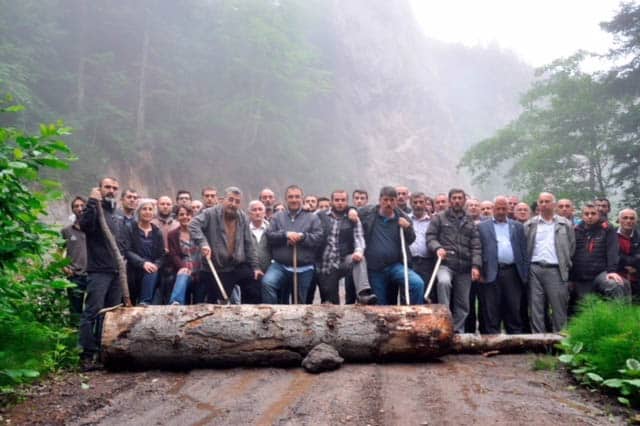 Posted on Monthly Review on March 5, 2018. Originally on Left Voice.

Zafer Ülger is a member of the Başlangıç socialist collective in Turkey. He has participated in the student movement (1995-1997) in Turkey, and was a part of the anti-war movement after September 2001. He joined the the local neighbourhood solidarity and forums movement after the Gezi Park resistance. He is now working on his PhD dissertation on ecology struggles and contradictions between capitalism and the ecosystem at Marmara University.

Zafer spoke with Arielle Concilio of Left Voice to discuss environmental issues in Turkey, their relation to capitalist accumulation, and the increasing violence against environmental activists in the country.

Arielle Concilio: Can you tell us about the main environmental issues you see currently in Turkey and their relation to capitalist accumulation?

Zafer Ülger: In Turkey, the ecosystem has come under increased attacks in the recent years. This is mainly due to the nature of the capitalist accumulation in Turkey, which centers on the construction, energy and infrastructure industries that wreak havoc on the ecosystem. One must also underscore the mineral exploration activities carried out by global and Turkish corporations. Gigantic infrastructure investments, employed by global capitalism as a measure against economic recession in the aftermath of the 2008 crisis, have been stepped up in Turkey as is the case across the world. For instance, the Turkish government is trying to launch a construction project dubbed “Kanal İstanbul,” which will open up a huge channel running parallel to the Bosphorus and turn Istanbul into an island; government officials refuse even to discuss the probable disastrous effects of this project.

AC: Can you tell us about the new repression against environmental activists in Turkey?

ZÜ: In recent years,police violence towards ecology activists during protests and general state repression have become business as usual.  For instance, in the province of Erzurum, which had not witnessed any protests in the last few decades, villagers protesting the construction of a hydroelectric power plant were put on trial; the court banned one detained teenager from meeting with other detainees, including his grandmother. In the Ulukışla district of Niğde province, villagers protesting the construction of a mine clashed with the gendarmerie. The villagers of Rize also frequently confront the gendarmerie to prevent the construction of a so-called “Green Highway” passing through forests and highlands. As is known, the Gezi protests of 2013, which spread across all the provinces with the participation of around 2 million people, had been initiated to protect an urban park at the center of Istanbul against the construction of a shopping mall; 12 people had lost their lives as a result of the fierce crackdown.

Last year, however, for the first time in Turkey, a couple of ecology activists —Ali Ulvi and Aysin Büyüknohutçu —fighting against the construction of a mine in the forested area where they dwelled, were murdered. Although the prosecutor put an individual suspect on trial for murder and robbery, he soon confessed that he was paid by mine owners. Even more worryingly, the suspect died in prison before he could appear in court. It was announced that he had committed suicide and there were attempts to cover up the case. Turkey’s history is replete with political murders and assassinations of socialists; but this was the first case of ecology activists being murdered.

AC: Do you see the increased repression against environmentalists in Turkey as part of a larger global trend?

ZÜ: Certainly; there is a significant recent rise in the number of ecology activists murdered across the world, according to data by Global Witness: 50 people were killed in 2003, 88 in 2011, and 197 in 2017. The increased crackdown on ecologists in Turkey is a part of this worldwide development. In Turkey, just like across the world, capitalism steps up the exploitation of nature as a response to its economic crisis; those who defend the nature are viewed by states and capital as individuals and groups that must be crushed.

AC: In the U.S., many see environmentalism as a change in individual behaviors (recycling, buying fuel-efficient cars, etc.) while the largest polluters are multinational corporations. Do you see a similar dynamic in Turkey?

ZÜ: Similar dynamics do exist in Turkey, even if in different guises. For example, urban green space is shrinking rapidly and numerous young ecologists migrate to the countryside and take up agriculture. In reaction to the extended use of GMOs and various chemicals, the white-collar middle classes tend to consume organic food. The use of individual solar panels is also on the rise. I, for instance, separate organic waste and mix it into the soil of the plants in my balcony.

But as you say, such individual efforts are like a drop in the ocean if we consider the destructive dynamics unleashed by current day capitalism. No individual effort would suffice to reduce carbon dioxide emissions, simply because these emissions which trigger climate change largely come from multinational corporations. Individual activists who escape from the cities to the countryside have to confront there mining corporations or water companies that try to monopolize water resources. As such, an individual or spatial escape from capitalism’s destruction of nature does not seem to be an option. Such individual actions have to be integrated into a more general anti-capitalist struggle. On the other hand, I do not think that individual efforts are totally in vain either. Such changes may trigger debates, even if on a local scale.

On the other hand, for the poor, polluting the nature is way too expensive. For instance, even basic public transport is very costly for someone who works for the minimum wage in Turkey. Impoverished households are simply obliged to save energy. People have to grow vegetables in their tiny gardens to cut grocery expenses. Maybe this does not make them environmentalists per se, but it brings up an issue that some environmentalists gloss over: the class nature of ecological struggle. The recent ecological struggles against hydroelectric power plants and mines cannot be reduced to the protection of nature. Since these enterprises may represent an employment opportunity for some, nature must be defended against rampant poverty as well.

ZÜ: There is indeed rising interest towards Marx’s writings on ecology. Figures such as John Bellamy Foster, Paul Burkett, Neil Smith are just some of the authors who write on the ecological aspects of Marx’s heritage. Of course, it is hard to compare the destruction of the ecosystem during Marx’s time — which was a rather early stage of capitalism — with what is happening today. As such, we cannot find in Marx’s opus the full range of the ecological crises that we are going through in our age. Some pundits claim that Marx’s positive comments on the historical and technological development amount to ignoring ecological issues.

However, we can see that, in Marx’s early writings and also in his masterpieces, nature lies at the heart of his understanding of the world, of his dialectical method. For instance, the concept of environmentalism tends to place humans at the center while placing nature in the periphery. As such, numerous ecology activists criticize this concept arguing that it situates humans and nature on opposite poles and denies their unity. In fact, some aspects of this contemporary criticism towards the concept of environmentalism can be found in Marx’s early work, where he explores the correct methodology to display the dialectical unity of humans and nature. In his 1844 manuscripts, Marx argues that nature is inherent in the human body, and that humans have to establish a continuous dialogue with this nature in order to survive. In German Ideology, too, he suggests that the history of nature and history of humanity are inseparable and need to be conceived as a whole.

In Capital, Marx uses the concept of metabolism while analyzing the relation between humans and nature under conditions of capitalist agriculture and land rent, and views the labor process as the driving force of this metabolism. He remarkably demonstrates how capitalist agriculture and large land property lead to a concentration of dispossessed laborers in the cities, while preventing the return to soil of various elements consumed by individuals for food or clothing, thereby creating a destructive effect on both city and countryside. The lack of fertilizer in the countryside was directly connected to urban hazardous waste that became toxic as it could not return to the soil, poisoning cities and their hinterland. Capitalism sprawls across space in an unequal fashion as labor force and fixed capital are concentrated in specific hubs; this in turn, disrupts the natural cycle of ecosystems and leads to a rupture in the natural metabolism. Capitalist large industry exploits and exhausts labor power, while capitalist agriculture robs soil of its natural forces.

Marx’s analysis of capitalist production shows that the processes of competition and accumulation speed up capital’s turnover time and impose their own rhythm on nature. Even this analysis is enough to show why capitalism cannot establish an ecological production system. It debunks capitalist myths of creating a “sustainable” capitalism in harmony with natural cycles. The food industry forces plants —through GMOs— and laborers —through the factory system — to adapt to its ever-rising pace of accumulation. Trees that cannot keep up with this pace are not allowed to thrive in their own habitat. In order to force them into this rhythm, organisms in the ecosystems are submitted to a destruction that forces their nature to mutate.

As argued by Marx, capitalism transforms labor into abstract labor time, severing it from its natural skills and reducing it into an extension of machinery and computer systems; likewise, capitalism destroys the diversity of nature and reduces it to the monoculture commodities produced by capitalist industries. Under capitalism, the expanding division of labor and monopolization create a uniform nature in their own image: Cities of concrete and tarmac, monoculture farms producing for international markets, forests turned into tree farms to meet the raw material demand of the industry. Capitalism imposes a monolithic nation-state structure to diverse peoples like a straitjacket, and does a similar thing to nature. It annihilates the diversity of organisms in nature and eradicates its self-sufficient character, and turns it into an ecosystem that is dependent on the inputs of capitalist industry. As Marx suggests, labor intermediates our relation with nature; however, this productive faculty, which is a gift of nature in a sense, turns under the capitalist labor process into a parasite that undermines the ecosystem, or even into outright destruction — as is the case with the arms industry.

Today, we are witnessing militant resistance in different spheres of struggle, such as labor, nature, women, etc. However, internal divisions appear within the ecological struggle, and there seem to be invisible walls between ecological struggles and other social struggles. Those fighting against climate change, against destruction of farmland, for water rights or for animal rights are compartmentalized, and in turn, they are also disconnected from the struggles of laborers, women or oppressed peoples. Today we need shared ideas and movements that could unite ecological struggles with other social struggles. Today, the crisis of the ecosystem or nature cannot be reduced solely to climate change or the destruction of wildlife. The crises experienced by labor, women or oppressed peoples are not separate from the crisis of nature and ecosystems; it is just the other side of the same coin. I think that Marx’s analysis of capitalism and his dialectical method give us the tools to overcome this fragmented state of our struggles.