Controlling the Narrative on Syria 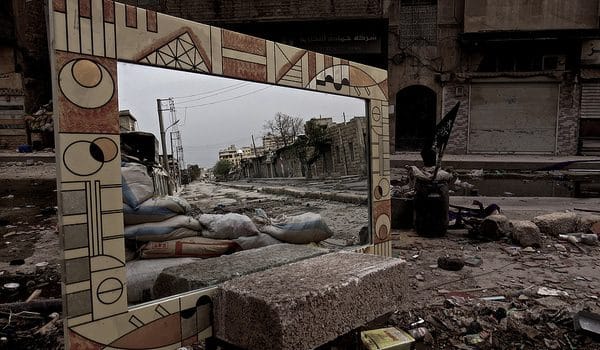 Since 2011, the torrent of ill-informed, inaccurate and often entirely dishonest analysis of events in Syria has been unremitting. I have written previously about the dangers of using simplistic explanations to make sense of the conflict, a problem that has surfaced repeatedly over the past five years. However, there is a greater problem at large. The mainstream discourse on Syria has become so toxic, detached from reality and devoid of nuance that anyone who dares to even question the constructed narrative of ongoing ‘revolution’, or opposes the arguments of those who advocate for the imposition of a no-fly zone by the West, can expect swift retribution. Such dissenters are immediately attacked, frequently slandered as ‘Assadists’ or ‘Pro-Assad’ and often accused of showing cruel indifference to the suffering of Syrians. One of many truths lost within this discourse is the reality that the creation of a no-fly zone would, in the words of the most senior general in the US Armed Forces, mean the US going to war “against Syria and Russia”. I wish to be clear from the outset that I write this as someone who has previously lived in Syria and cherishes deeply the memories of my time there. I remain in touch with many Syrian friends, most of whom are now refugees outside of the country. So it is particularly difficult for me to swallow accusations of callousness towards the plight of Syrians and their country: nothing could be further from the truth.

In the current environment, to express even a mildly dissenting opinion, point out basic but unwelcome facts such as the presence of significant public support for the government in Syria, or highlight the frequently brutal acts of rebel groups, has seen many people ridiculed and attacked on social media. These attacks are rarely, if ever, reasoned critiques of opposing views; instead they frequently descend into personal, often hysterical, insults and baseless, vitriolic allegations. Generally, a set of core arguments are used to denounce those who question the dominant narrative: they include the notion that it is somehow Islamophobic to criticise the actions of rebel groups or to label them as extremists, and that to highlight the central role of US imperialism in the conflict is Orientalist as it denies Syrians their ‘agency’. Often, legitimate criticism is simply dismissed outright as ‘fascist’, ‘Stalinist’, ‘Putinist’ or all three. The policing of acceptable opinion in this way has a simple and practical function: to foster a climate in which people feel too intimidated to speak out, thus allowing the dominant narrative to remain unquestioned so that, crucially, it can continue to be utilised to generate public support for further Western intervention in Syria.

Of course, this is a strategy with a well-established precedent; the treatment given to many opponents of NATO’s assault on Libya in 2011 and the US/UK invasion of Iraq in 2003 are obvious recent examples. Unfortunately, it remains an effective means to stifle dissent and establish the acceptable parameters of mainstream debate. Its success has meant that those in favour of greater Western intervention in Syria have virtually monopolised the popular debate and control the narrative. I know several people who have admitted to me that they are too intimidated to write or speak honestly about Syria in public and so either limit what they say or, if possible, do not broach the topic at all. I am certain that many reading this will have noticed a glaring difference between private conservations they have with friends and acquaintances that work on Syria in some capacity, and the statements that they make in public.