Coronavirus: How Iran could become the guinea pig for the herd immunity strategy 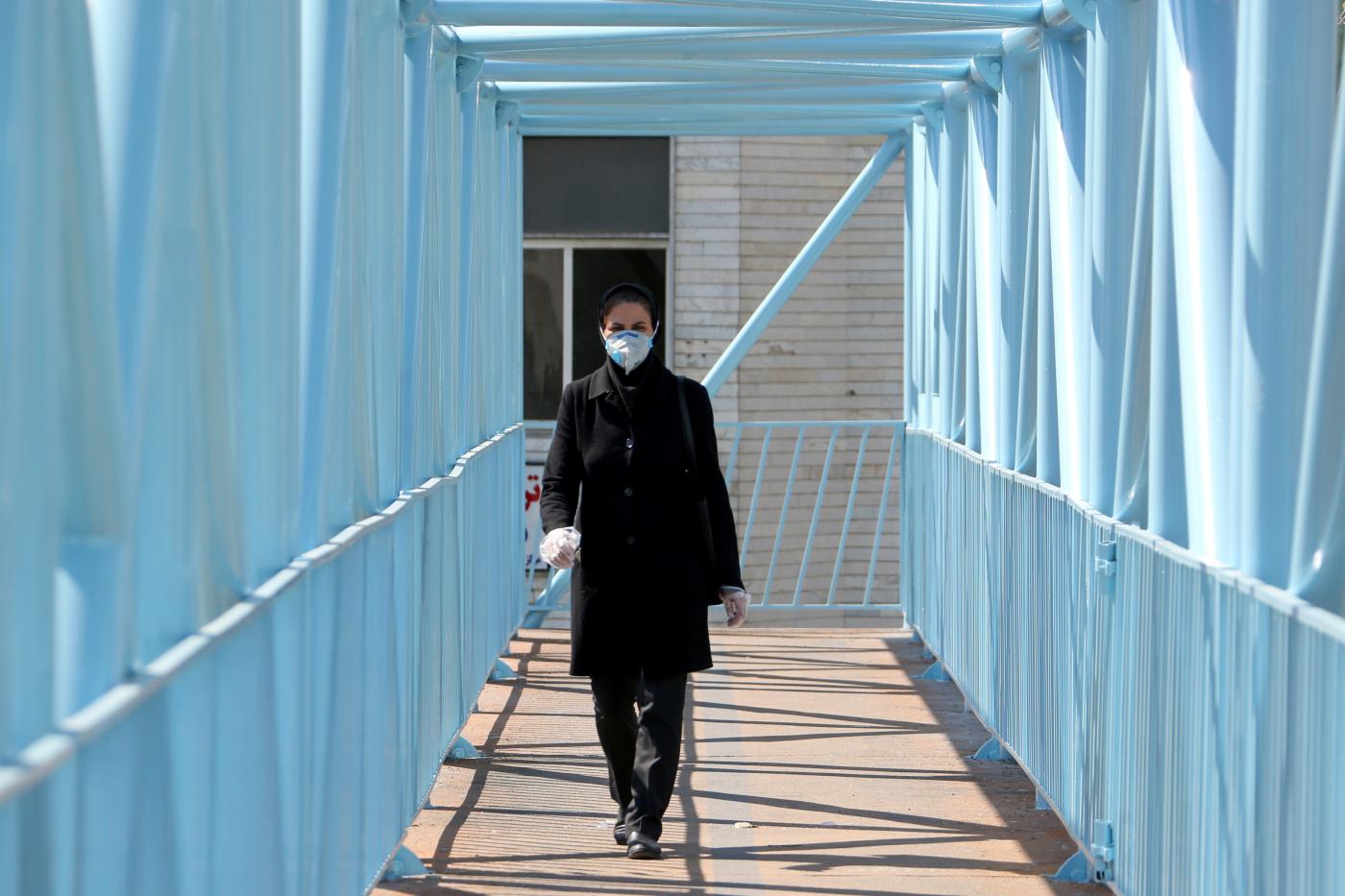 Pandemics such as the coronavirus outbreak produce exceptional times, affecting ordinary people fearing contagion as much as those in power, including government and state institutions.

The Black Death of the 14th century shaped European – and, indeed, global – political and cultural life in epochal ways, leading to the emergence of new religious, artistic, economic and social movements in the centuries that followed. The Italian Renaissance flourished after the devastation experienced by Italian cities, Florence in particular, amid the bubonic plague.

Crises that mete out death and pain to most people, either directly or to their loved ones, tend to leave a permanent mark on how people conceive of politics and how public institutions and states manage disorder.

‘The mother of all tests’

Today, Covid-19 is putting global politics to the test. The way in which nations manage this crisis will affect future models of governance and state-society relations.

Around the world, reactions have varied: China failed in the very early stages of the outbreak, but has since used its potent state machinery and massive logistical means to contain the spread – or at least to give the perception of containment for the time being.

Italy, despite having one of the world’s most advanced public health systems, has struggled to contain the virus to the northern regions, with the heavy human toll aggravated by an ageing population (around a quarter of the country’s population is over 65). Italy remains in a countrywide lockdown, with no clear end in sight.

This puts the country face-to-face with a stark question: Is it better to enforce quarantine and suffer from a lack of income, or to risk contagion but avoid hunger?

Iran also faces what has been described as “the mother of all tests”. Amid the harshest sanctions regime in history, Iran has been wrestling to tackle the Covid-19 outbreak, which could cause up to 3.5 million deaths, according to one recent study.

While US sanctions are an aggravating element in this critical scenario, domestic factors are also shaping the politics of Covid-19.

In my book Drugs Politics: Managing Disorder in the Islamic Republic of Iran, I look at how the Iranian state intervened in another contemporary epidemic – the drug and HIV/AIDS epidemic – over the last four decades. Although drug-related epidemics differ from viral epidemics, the politics of managing crises may share similar strategies.

Initially, the Iranian government denied the scope of the Covid-19 threat, even as news circulated about deaths and escalating contagion. This period of denial set the stage for a perfect storm that followed. Iran’s epicentre was the religious city of Qom, from where the virus spread rapidly across the nation and to neighbouring countries. Parliamentary elections also accelerated the spread, as polling stations remained open amid the government’s fear of a low turnout.

Meanwhile, the arrival of the festive season of Nowruz – the Iranian new year, when millions of Iranians visit their loved ones and travel across the country – triggered risky mobilisation among the population.

Amid relentless anti-Iran propaganda online, the government perceived the spread of coronavirus news as another attempt to destabilise the national economy by sparking fears of viral contagion.

At one point, President Hassan Rouhani described news about Covid-19 as a plot by foreign enemies, just as in the 1980s, the drug epidemic was described as an imperialist plot. This exacerbated the lack of public trust in official narratives, which had already plummeted after the Ukrainian plane shootdown.

The concurrence of these factors and the adoption of a no-policy approach by the Iranian government meant that it could no longer stop the viral contagion. The alternative became that of maintaining disorder, rather than bringing back order. Cautious acknowledgement preceded an all-out crisis situation, whereby different political institutions competed over which strategies ought to be implemented to mitigate the crisis.

In practical terms, this resulted in what has been the Islamic Republic’s historical approach to crises. The government was reluctant to adopt centralised, top-down measures, such as quarantine, closure and physical distancing, as demanded by the armed forces and Revolutionary Guards.

Unlike centralised autocracies, such as China, Iranian political cadres have systematically privileged non-centralised means of intervention, relying on the social mobilisation of volunteers, NGOs and professional groups. Thus, the public crisis morphs from a governmental problem into a national question, where citizens must play their part to fight the threat of contagion.

This was also the case in the early 2000s, when an outbreak of HIV/AIDS risked spreading among the general population. Rather than acting quickly through legislative measures, the government initially relied on the work of civil society groups, and only later took steps to update the legislative framework and welfare strategy to intervene countrywide.

Amid the coronavirus pandemic, Iran’s policy of no-policy has meant that social agents – including local volunteers, medical professionals, activists and militias – have led the national campaign to mitigate the crisis.

This does not mean the government has taken no action; on the contrary, the cabinet has been vocal in asking the population to stay at home, to minimise physical interactions, and to be patient.

Yet, it has not adopted any strong, binding legislation to enforce this advice. Why?

Iran is in no position to put the country into a total economic lockdown, as is happening in Italy and elsewhere. Given the heavy loss of revenues caused by US sanctions, the government does not possess the financial means to support the economic disruption of a mass quarantine in cities such as Tehran and Qom.

Or, while it may have the means to do so, the price of this strategy would be an overhaul of the existing political-economic order; in other words, nationalisation and confiscation of large private capital, which represents the government’s main line of support. This puts the country face-to-face with a stark question: is it better to enforce quarantine and suffer from a lack of income, or to risk contagion but avoid hunger?

Different social classes face different risks and demand different reassurances. It is not uncommon to hear that the threat of the virus is less than that of economic deprivation.

Viruses are “democratic” only to a certain degree. Various social classes face stark decisions over the risks and dividends, with poorer communities lacking the benefit of choice. A cursory observation of people’s spatial presence across Tehran speaks for itself: the northern, richer districts are a “ghost city” as people stay at home, while the southern districts still buzz with street vendors and daily workers seeking to make a living.

At this stage of the pandemic, and with the world indifferent to the economic plight of Iranians living under inhumane sanctions, Iran may become the unwilling guinea pig for what was outlined in the UK government’s initial strategy on Covid-19: seeking herd immunity in the general population, at a devastating human cost.

Maziyar Ghiabi is a transdisciplinary researcher working on the politics of human security and health using ethnographic and historical approaches. His work concerns West Asia, in particular Iran, but he has also carried out research across the Global South. He is now a Postdoctoral Research Fellow on the Drugs & (Dis)Order Project, based at the SOAS (University of London). Prior to this project, Maziyar worked and studied at Oxford University, the EHESS in Paris, and Ca’ Foscari University of Venice. His work has been supported by the Wellcome Trust and he is the author Drugs Politics: Managing Disorder in the Islamic Republic of Iran (London: Cambridge University Press, 2019, also in Open Access) and Power and Illicit Drugs in the Global South (Routledge, 2019).