Death of a radical intellectual 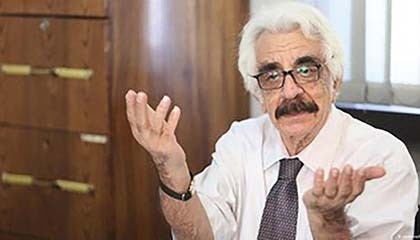 Professor Fariborz Raisdana, who died on March 16 in a Tehran hospital, was a leftwing economist, political activist and author, who lived and worked in Iran. According to relatives, his hospital admission was as a result of showing symptoms of coronavirus. He had a long-standing heart condition.

Raisdana faced many restrictions imposed by the Islamic Republic, yet never missed an opportunity to express openly his support for socialism, and the class struggles of the Iranian working class. An economist by training, he had a degree and a PhD from the London School of Economics. But he was much more than a university lecturer. An activist and a member of Iran’s writers association, he was an outspoken critic of the Islamic Republic and often one of the first at political protests, including student and workers’ gatherings, in the last two decades.

During and after the episode known as ‘serial political murders’, when a number of dissident intellectuals critical of the Islamic Republic system were murdered or disappeared (1988-98), Raisdana was one of the few intellectuals who bravely took every opportunity to protest. He attended the funerals of leftwing writers killed during this period and was often the spokesperson for their families.

There is evidence to suggest he had some illusions in the regime’s ‘reformists’, particularly in the first round of the 1997 presidential elections won by Mohammad Khatami. However, those illusions were soon shattered. His anger was expressed passionately in subsequent comments against all sections of the regime. In the last few years he had been a fierce critic of the administration of president Hassan Rouhani.

In an interview in 2002, he was asked what he thought about the possibility of US-led intervention. He replied that: “If the United States intervenes in Iran directly, I think it is in favour of the conservatives. It will cause the government to unite and to be more powerful.”

In March 2012 Raisdana was arrested after criticising the economic policies of the charlatan populist, president Mahmoud Ahmadinejad on BBC Persian. He was given a one-year sentence. The charges labelled against him included “membership of the writers’ association, preparing seditious announcements against the regime, giving interviews to BBC and Voice of America, and accusing the Islamic Republic of abusing prisoners and holding show trials”. His fellow inmates held in the political wing of Evin prison have written about the time they spent there with him. They all write of his modesty, his humour and his support for fellow detainees.

He was an outspoken opponent of censorship and repression, yet he had no time for pro-war, pro-‘regime change from above’ ex-leftists, who nowadays parade on Saudi, Israeli and US-paid Persian-speaking TV and radio stations. He had no interest in financial and personal gain, and remained to the end a committed anti-war, anti-imperialist activist.

The following extract from an interview with Al Monitor summarises his views about the neoliberal economic policies of the two main factions of Iran’s Islamic Republic, the conservatives and ‘reformists’:

Raisdana: You know, I did not only criticise the Rouhani administration. When it comes to the economy, I criticise all previous administrations. They were all capitalist administrations with semi-governmental monopolies. All these administrations were basically opposed to any effective form of welfare, scientific planning or democratic and cooperative programmes that would increase equality. For all of them, making more profit by relying heavily on petroleum revenue, heavy capital investment, trade and real estate has always been the number-one goal.

the workers, service personnel and government employees with middle or low incomes. Under the supervision of all these presidents, with the exception of the first few years of Ahmadinejad’s presidency, distribution of wealth either worsened or stayed the same.1

Although he was a political activist, Fariborz Raisdana certainly did not neglect his intellectual work. He authored 15 books, including Applied development economics, Money and inflation, Political economy of development and Globalisation.

I had never met Raisdana in person, but we were on a number of TV interviews together and I chaired a number of talks he gave in Socialist Forum online meetings in 2005-10. In those meetings I was always impressed by how patient he was in answering everyone’s questions, but also in dealing in a calm and composed manner when replying to baseless accusations from the audience – mainly supporters of the various groups originating in the Worker Communist Party of Iran. He argued that they were apologists for imperialism and Zionism, and he was used to their attempts at disrupting meetings he addressed.

Last summer I contacted him regarding a research proposal I had sent to my college in Oxford. The working title of the proposal is ‘Privatisation and its relation to workers’ protests in Iran’s Islamic Republic’ and I asked him for references to articles and his own books on the subject. He read the proposal carefully and was very generous with his time and support. We spoke a couple of times and he wrote lengthy messages on the subject.

He was adamant on how I should proceed. He was clearly contemptuous of all the factions of the regime – they were all equally bad, when it came to their neoliberal economic policies. He advised me to concentrate on the relationship between the business interests of members of these factions and external global capital: “You must address the continuing conflict between Khamenei and his anti-US rhetoric. We need to explain how this relates to his insistence on relentless privatisation.”

He wanted me to do more work on the special character of Iran’s religious-capitalist system, its ability to gain maximum profits through the non-productive sector – rent, land ownership, endemic corruption. He was convinced that the regime’s hatred of the left stemmed from the fact that we analyse and expose these characteristics, while rightwing opponents of the regime just bury themselves in slogans.

Last but not least, he was adamant that the research will be of little value, unless I conducted in-depth interviews with labour activists who had taken part in class conflicts, and he volunteered to help with this. In honouring his memory, I will do as much as I can to follow up what he suggested.