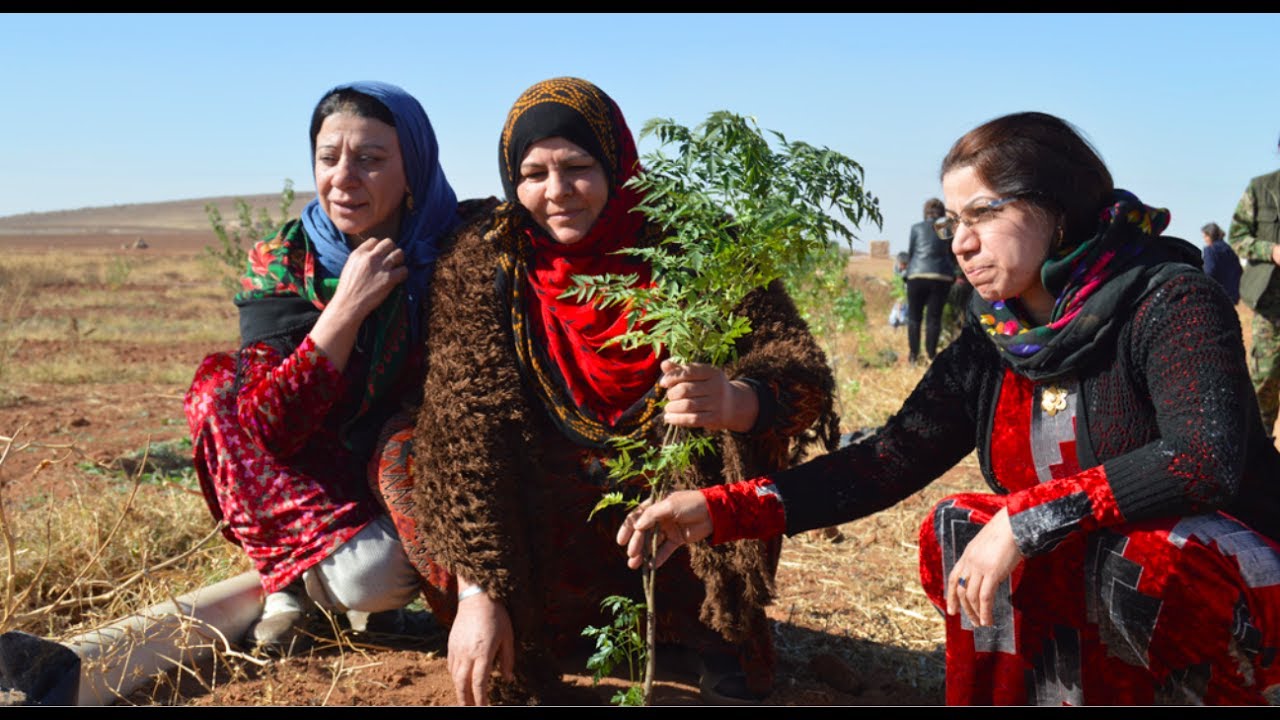 Since 2012, with the leading role of women, the people in North and East Syria have been building a social system that enables a peaceful, radical-democratic, gender-liberated life for all ethnic, religious and cultural groups in the region.

This autonomous self-organization was created through the determined belief in democracy, freedom and the solidarity of all peoples. Leading the fight against the so-called Islamic State, the self-organization established a sense of safety and stability, enabling all peoples to collectively face the future with hope, despite the war-mongering policies pursued by hegemonic global and regional powers that protect the status quo by inciting ethnic and religious conflict.

The democratic, lived alternatives, built up despite constant attacks, displacement, and economic embargoes, made it impossible for the capitalist forces to assert their own interests in the region. They are a thorn in the eye of those, who want to impose authoritarianism, dependency and exploitation on the peoples of the Middle East.

The Turkish state’s invasion of Afrin in January 2018 was an attack on hope, co-existence and democracy among the communities in the region, symbolized by the democratic self-governance in northeastern Syria.

In a blatant violation of international law, the Turkish state and its mercenaries killed over 1,000 people — mainly civilians — systematically destroyed villages, historic and religious sites, nature and the economic resources of the population. More than 300,000 people were forcibly displaced.

Extremists settled there in place of the displaced population and ever since worked together with Turkey to commit daily crimes against humanity. They plunder homes, kidnap members of families who were unable to escape, rape women, torture prisoners to death, burn down nature and steal local cultural treasures.

All of the autonomous women’s structures that had been built there over the course of six years were destroyed, as violence against women became policy of the occupation.

This time, the Turkish president Recep Tayyip Erdoğan has been trying to get the international community to agree to a Turkish occupation of the entire area of northeastern Syria. The democratic self-government of northeastern Syria was able to prevent a Turkish attack with great diplomatic efforts and has implemented all the steps agreed with Washington and Ankara for the establishment of a so-called security zone in recent weeks.

However, the developments of the last few days clearly show that Erdoğan and the fascist Turkish state have never distanced themselves from an invasion of northern Syria. US president Donald Trump’s latest statements also show that the international community has tacitly agreed to such an attack.

Following a telephone conversation between Erdoğan and Trump, the White House has announced that the forces of the international coalition will withdraw from the region and that responsibility for fighting the remnants of the so-called Islamic State will be transferred to Turkey.

For those, who have been leading the war against ISIS on the ground, transferring responsibility for the struggle against ISIS to those, who have supported the group in every way — logistically and ideologically, with weapons, recruitment and border deals — is an open declaration of war on all values of humanity. Such an attack will not only mean that, similar to Turkey’s offensive in Afrin, thousands of civilians will be killed and hundreds of thousands of people displaced — among them, people who have already been internally displaced.

Such an operation will also endanger all of the alternative democratic structures that have been built up in the area for peoples’ freedom, peace, justice and women’s liberation. That governments remain silent in the face of these concrete threats is a clear demonstration of the fact that it is dangerous for the oppressive patriarchal system to allow the women’s revolution to spread.

The Kurdish, Arab, Turkmen, Armenian, Assyrian and Syriac people of the confederation of northeastern Syria, having managed to survive the worst kinds of attacks, are therefore prepared to defend themselves once again. In particular as women we have learned to defend ourselves: to defend our land, to defend our people, to defend what we are.

The heroic struggle of the Women’s Defense Units YPJ has illustrated to all women in the world once again that self-defense is women’s only guarantee for a life in freedom. States remain silent, because they are aware that what is being built in northeastern Syria is an alternative model to the patriarchal and capitalist system that they represent.

We know that our allies are not governments, states and their armies, but all the women, who rise up in every part of the world to overthrow the patriarchy. Our allies are the forces that build a different world day by day and work to defend it.

All of the struggles for justice and liberation around the world are reverberating in the revolution of north and east Syria. It is to our true allies, the forces of freedom, therefore that we appeal today: we are together in this struggle.

Take to the streets and defend the women’s revolution in northeastern Syria!

Posted on Roarmag and ZCommunications October 10, 2109.