Defying U.S., China and Iran Near Trade and Military Partnership 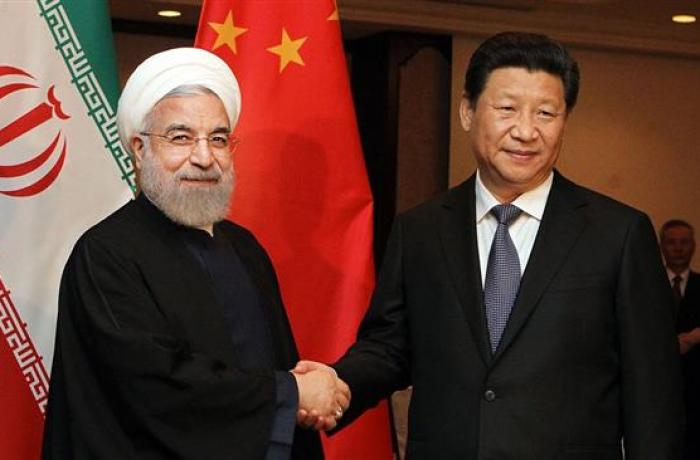 Iran and China have quietly drafted a sweeping economic and security partnership that would clear the way for billions of dollars of Chinese investments in energy and other sectors, undercutting the Trump administration’s efforts to isolate the Iranian government because of its nuclear and military ambitions.

The partnership, detailed in an 18-page proposed agreement obtained by The New York Times, would vastly expand Chinese presence in banking, telecommunications, ports, railways and dozens of other projects. In exchange, China would receive a regular — and, according to an Iranian official and an oil trader, heavily discounted — supply of Iranian oil over the next 25 years.

The document also describes deepening military cooperation, potentially giving China a foothold in a region that has been a strategic preoccupation of the United States for decades. It calls for joint training and exercises, joint research and weapons development and intelligence sharing — all to fight “the lopsided battle with terrorism, drug and human trafficking and cross-border crimes.”

Iranian officials have publicly stated that there is a pending agreement with China, and one Iranian official, as well as several people who have discussed it with the Iranian government, confirmed that it is the document obtained by The Times, which is labeled “final version” and dated June 2020.

It has not yet been submitted to Iran’s Parliament for approval or made public, stoking suspicions in Iran about how much the government is preparing to give away to China.

In Beijing, officials have not disclosed the terms of the agreement, and it is not clear whether Mr. Xi’s government has signed off or, if it has, when it might announce it.

If put into effect as detailed, the partnership would create new and potentially dangerous flash points in the deteriorating relationship between China and the United States.

It represents a major blow to the Trump administration’s aggressive policy toward Iran since abandoning the nuclear deal reached in 2015 by President Barack Obama and the leaders of six other nations after two years of grueling negotiations.

Renewed American sanctions, including the threat to cut off access to the international banking system for any company that does business in Iran, have succeeded in suffocating the Iranian economy by scaring away badly needed foreign trade and investment.

But Tehran’s desperation has pushed it into the arms of China, which has the technology and appetite for oil that Iran needs. Iran has been one of the world’s largest oil producers, but its exports, Tehran’s largest source of revenue, have plunged since the Trump administration began imposing sanctions in 2018; China gets about 75 percent of its oil from abroad and is the world’s largest importer, at more than 10 million barrels a day last year.

At a time when the United States is reeling from recession and the coronavirus, and increasingly isolated internationally, Beijing senses American weakness. The draft agreement with Iran shows that unlike most countries, China feels it is in a position to defy the United States, powerful enough to withstand American penalties, as it has in the trade war waged by President Trump.

“Two ancient Asian cultures, two partners in the sectors of trade, economy, politics, culture and security with a similar outlook and many mutual bilateral and multilateral interests will consider one another strategic partners,” the document says in its opening sentence.

The Chinese investments in Iran, which two people who have been briefed on the deal said would total $400 billion over 25 years, could spur still more punitive actions against Chinese companies, which have already been targeted by the administration in recent months.

“The United States will continue to impose costs on Chinese companies that aid Iran, the world’s largest state sponsor of terrorism,” a State Department spokeswoman wrote in response to questions about the draft agreement.

“By allowing or encouraging Chinese companies to conduct sanctionable activities with the Iranian regime, the Chinese government is undermining its own stated goal of promoting stability and peace.”

The expansion of military assistance, training and intelligence-sharing will also be viewed with alarm in Washington. American warships already tangle regularly with Iranian forces in the crowded waters of the Persian Gulf and challenge China’s internationally disputed claim to much of the South China Sea, and the Pentagon’s national security strategy has declared China an adversary.

When reports of a long-term investment agreement with Iran surfaced last September, China’s foreign ministry dismissed the question out of hand. Asked about it again last week, a spokesman, Zhao Lijian, left open the possibility that a deal was in the works.

“China and Iran enjoy traditional friendship, and the two sides have been in communication on the development of bilateral relations,” he said. “We stand ready to work with Iran to steadily advance practical cooperation.”

The projects — nearly 100 are cited in the draft agreement — are very much in keeping with Mr. Xi’s ambitions to extend its economic and strategic influence across Eurasia through the “Belt and Road Initiative,” a vast aid and investment program.

The projects, including airports, high-speed railways and subways, would touch the lives of millions of Iranians. China would develop free-trade zones in Maku, in northwestern Iran; in Abadan, where the Shatt al-Arab river flows into the Persian Gulf, and on the gulf island Qeshm.

The agreement also includes proposals for China to build the infrastructure for a 5G telecommunications network, to offer the new Chinese Global Positioning System, Beidou, and to help Iranian authorities assert greater control over what circulates in cyberspace, presumably as China’s Great Firewall does.

The American campaign against a major Chinese telecommunications company, Huawei, includes a criminal case against its chief financial officer, Meng Wanzhou, for seeking to disguise investments in Iran in order to evade American sanctions. The Trump administration has barred Huawei from involvement in 5G development in the United States, and has tried, without great success, to persuade other countries to do the same.

Moving ahead with a broad investment program in Iran appears to signal Beijing’s growing impatience with the Trump administration after its abandonment of the nuclear agreement. China has repeatedly called on the administration to preserve the deal, which it was a party to, and has sharply denounced the American use of unilateral sanctions.

Iran has traditionally looked west toward Europe for trade and investment partners. Increasingly though, it has grown frustrated with European countries that have opposed Mr. Trump’s policy but quietly withdrawn from the kinds of deals that the nuclear agreement once promised.

“Iran and China both view this deal as a strategic partnership in not just expanding their own interests but confronting the U.S.,” said Ali Gholizadeh, an Iranian energy researcher at the University of Science and Technology of China in Beijing. “It is the first of its kind for Iran keen on having a world power as an ally.”

The proposed partnership has nonetheless stoked a fierce debate within Iran. Mr. Zarif, the foreign minister, who traveled to Beijing last October to negotiate the agreement, faced hostile questioning about it in Parliament last week.

The document was provided to The Times by someone familiar with its drafting with the intention of showing the scope of the projects now under consideration.

Mr. Zarif said the agreement would be submitted to Parliament for final approval. It has the support of Iran’s supreme leader, Ayatollah Ali Khamenei, two Iranian officials said.

Ayatollah Khamenei’s top economic adviser, Ali Agha Mohammadi, appeared on state television recently to discuss the need for an economic lifeline. He said Iran needs to increase its oil production to at least 8.5 million barrels a day in order to remain a player in the energy market, and for that, it needs China.

Iranian supporters of the strategic partnership say that given the country’s limited economic options, the free-falling currency and the dim prospect of U.S. sanctions being lifted, the deal with China could provide a lifeline.

“Every road is closed to Iran,” said Fereydoun Majlesi, a former diplomat and a columnist for several Iranian newspapers on diplomacy. “The only path open is China. Whatever it is, until sanctions are lifted, this deal is the best option.”

But critics across the political spectrum in Iran have raised concerns that the government is secretly “selling off” the country to China in a moment of economic weakness and international isolation. In a speech in late June, a former president, Mahmoud Ahmadinejad, called it a suspicious secret deal that the people of Iran would never approve.

The critics have cited previous Chinese investment projects that have left countries in Africa and Asia indebted and ultimately beholden to the authorities in Beijing. A particular concern has been the proposed port facilities in Iran, including two along the coast of the Sea of Oman.

One at Jask, just outside of the Strait of Hormuz, the entrance to the Persian Gulf, would give the Chinese a strategic vantage point on the waters through which much of the world’s oil transits. The passage is of critical strategic importance to the United States, whose Navy’s Fifth Fleet is headquartered in Bahrain, in the gulf.

China has already constructed a series of ports along the Indian Ocean, creating a necklace of refueling and resupply stations from the South China Sea to the Suez Canal. Ostensibly commercial in nature, the ports potentially have military value, too, allowing China’s rapidly growing navy to expand its reach.

Those include ports at Hambantota in Sri Lanka and Gwadar in Pakistan, which are widely criticized as footholds for a potential military presence, though no Chinese forces have officially been deployed at them.

China opened its first overseas military base in Djibouti in 2015, ostensibly to support its forces participating in international antipiracy operations off the coast of Somalia. The outpost, which began as a logistics base but is now more heavily fortified, is within miles of the American base in that country.

China has also stepped up military cooperation with Iran. The People’s Liberation Army Navy has visited and participated in military exercises at least three times, beginning in 2014. The most recent was last December, when a Chinese missile destroyer, the Xining, joined a naval exercise with the Russian and Iranian navies in the Gulf of Oman.

China’s state-owned Xinhua news agency quoted the commander of Iran’s Navy, Rear Adm. Hossein Khanzadi, saying that the exercise showed “the era of American invasions in the region is over.”

Steven Lee Myers is the Beijing bureau chief for The New York Times. He joined The Times in 1989 and has previously worked as a correspondent in Moscow, Baghdad and Washington. He is the author of “The New Tsar: The Rise and Reign of Vladimir Putin,” published by Alfred A. Knopf in 2015.