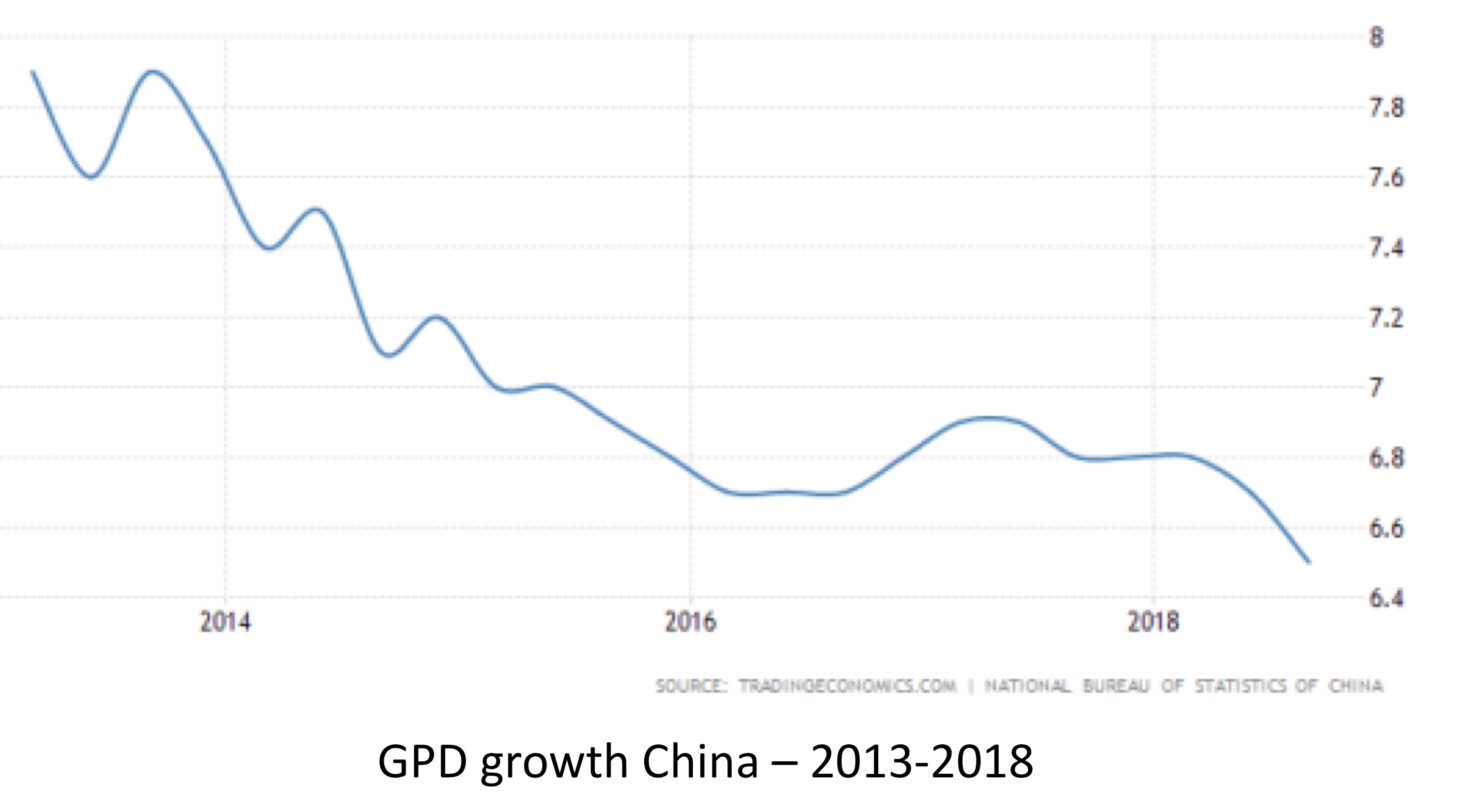 Well, there has not been a year starting like this for a long time.  The US government is in disarray.  The President of the Unites States starts the second half of his four-year term having lost his majority in the lower house of Congress to the Democrats in a heavy polling defeat last November.  He starts with an acting chief of staff, an acting secretary of defense, an acting attorney general, an acting EPA administrator, no interior secretary and no ambassador to the UN. His former campaign manager, deputy campaign manager, national security adviser and personal lawyer have all pleaded guilty to criminal offences.  And the investigation by special prosecutor Mueller on the connections between the Trump presidential campaign and Russian intelligence will be stepped up.

Also the geopolitical environment has turned toxic.  The Trump administration has picked a fight with China over trade and technical know-how that threatens to intensify when the current ‘pause’ on the tit-for-tat trade tariffs ends in March.

This time last year, Trump was boasting that the US economy was booming, with record highs for the US stock market.  Back then, I said that “What seems to have happened is that there has been a short-term cyclical recovery from mid-2016, after a near global recession from the end of 2014-mid 2016.  If the trough of this Kitchin cycle was in mid-2016, the peak should be in 2018, with a swing down again after that.”

And in April 2018, I posted that I thought the short boom in 2017 from the mini-recession of 2015-6 was over and that world growth had peaked.  And so it has proved.  2018 has ended with real GDP growth starting to slow nearly everywhere.

And at the end of 2018, stock markets suffered the deepest fall since the global financial crash in 2008.  Current US treasury secretary Mnuchin panicked and called a meeting of the top six US banks on Xmas eve to check that they were confident of standing firm, only making things worse.

As I have argued before, Marx said that what drives stock market prices is the difference between interest rates and the overall rate of profit. What has kept stock market prices rising since 2009 has been the very low level of long-term interest rates, deliberately engendered by central banks like the Federal Reserve around the world, with zero short-term rates and quantitative easing (buying financial assets with credit injections).  The gap between returns on investing in the stock market and the cost of borrowing to do so has been high.

But in 2018 investors in fictitious capital (stocks and bonds) perceived that this situation was changing.  Interest rates are on the rise (driven by the US Fed) and there are signs that the recovery in the rate of return on capital in the major economies has peaked and is reversing.  US growth peaked in Q2 at a 4% annual rate and Q4 growth is expected to be closer to 2.5%.  The very latest indicator of US growth, the Richmond business activity indicator, suggests a sharp drop in growth in early 2019 – perhaps even to stagnation.

In Europe, hopes of a synchronised expansion matching that of the US have been dashed, as the leading European economies, France and Germany, have slowed, while the weaker ones like Italy have slipped back into recession.  UK real GDP growth is also dropping fast as companies apply an investment strike due to uncertainty over Brexit.  The Eurozone economy is now growing at only 1.6% compared to nearly double that rate this time last year.

And it is not just in the major advanced capitalist economies that the forecast end to the Long Depression since 2008 has been confounded.  In Asia too, there has been a slowdown in the second half of 2018.  Japan’s real GDP was static in Q3 2018.

Korea too is slowing.

All the official growth forecasts (from the IMF, the OECD, World Bank etc) for are for a lower rate in 2019 compared to 2018.

Now a recession in mainstream economics is technically defined as two consecutive quarterly contractions in real GDP growth.  The consensus does not expect that in 2019.  But are the mainstream experts wrong; will the major economies drop into a slump this coming year?

Many argue that forecasts, let alone economic forecasts, are not worth the paper they are typed on.  I’m not sure that I agree. I would make a distinction between prediction in scientific analysis and forecasts.  But I won’t deal with that issue now.  Instead I’ll plough into my forecast for 2019.

So what now for 2019?  Well, what did I say were the key factors for 2018?  I said that “there are two things that put a question mark on the delivery of faster growth for most capitalist economies in 2018 and raise the possibility of the opposite.  The first is profitability and profits” and the second “is debt…global debt, particularly private sector (corporate and household) debt has continued to rise to new records.”

This is still true for 2019.  Global debt rose through 2018 and, most important, the cost of servicing that debt also began to rise as the US Federal Reserve continued with hiking its policy rate – with the last rise made just before the end of the year.

The Fed rate sets the floor for interest rates in the US and also the benchmark for international rates, given the dominant role of the dollar in international reserves and capital flows.  And other central banks have ended their cheap money injections – quantitative easing – which has now turned into quantitative tightening.

Thus “financial conditions” (the cost of debt, the state of stock markets and the value of the dollar against other currencies) have been tightening.

Just after Janet Yellen ended her term as Federal Reserve chair (her term was not renewed by Trump because he said she was “too short”), she declared that “there would be no more financial crises in our lifetime”, because of the new measures applied to ensure the banks won’t crash again.  But last month, she revised that view.  Apparently, there are “gigantic holes in the financial system” that she presided over and she now worries that “there could be another financial crisis” after all. This is because financial regulation is ‘unfinished” and she is not sure that the Fed and government are doing anything about that “in the way we should”.

In a recent paper, Carmen Reinhart, a mainstream expert on the history of financial crises, drew attention to the sharp rise in unbacked corporate debt, called leveraged loans, with issuance hitting record highs in 2018.  Reinhart concluded that “the networks for financial contagion, should things turn ugly, are already in place.”

So the scene is set for a new credit crunch in 2019 if profits stop growing and the cost of servicing the accumulated corporate debt goes on rising.  If the Fed continues with its policy hikes, just as in 1937 during the Great Depression of the 1930s, it threatens to provoke a sharp downturn, not just in the price of fictitious capital but also in the so-called ‘real’ economy.  This fear provoked Trump to consider sacking Fed Chair Jay Powell in the New Year.

The Bank for International Settlements (BIS), the international research agency for central banks, warned that what it calls the ‘financial cycle’ implies that a new credit crunch is coming.  “Financial cycle booms can end in crises and, even if they do not, they tend to weaken growth.  Once financial cycles peak, the real economy typically suffers. This is most evident around financial crises, which tend to follow exuberant credit and asset price growth, ie financial cycle booms. Crises in turn tend to usher in deep recessions, as falling asset prices, high debt burdens and balance sheet repair drag down growth.”  And most important “the debt service ratio is particularly effective in this aspect”.

All the credit indicators for a recession are now flashing amber, if not red.  The most popular is the so-called inverted yield curve, namely when the interest rate on a long-term government bond falls below the Federal Reserve’s policy rate.  Whenever that happens, it nearly always indicates a recession within a year.  Why? Because what the inverted curve tells us is that investors think that a slump is coming so they are buying ‘safe assets’ like government bonds, while the Fed thinks the economy is fine and is hiking rates – but the market will decide.

As one analyst put it: “Think of an inverted yield curve as a fever. When your body gets a fever, the fever is not the cause of the sickness. It just says something’s wrong with your body. You have the flu, appendicitis, or some other ailment. The fever indicates you are sick but not necessarily what the sickness is. And typically, the higher the fever, the more serious the condition.  It is the same with the yield curve. The more inverted the yield curve is and the longer it stays that way, the more confident we are that something is economically wrong that may show up as a recession sometime in the future.”  The US yield curve has flattened but has not yet inverted.  So this reliable indicator has still not turned red yet.

Another important indicator for a coming recession can be found, not in the credit markets, but in the global economy.  It’s the price of copper and other industrial metals.  Metals are central inputs in industrial production around the world and so if their prices fall, this suggests that companies are reducing investment in production and so using less metal components.

In 2018, the copper price fell back from a peak of 320 to 270 after July.  But since then it has steadied and remains well above 200 then it fell to in the mini-recession of early 2016.  So this suggests that while the world economy peaked back last summer, a recession is not yet with us.

Another indicator that the world economy is slowing down from its mini-boom in 2017 is the sharp fall in oil prices.  The price has plunged from $75/b in October to $45/b now. That will hit the profits of the energy companies and the trade balances of the oil producers.

The most important factor for analysing the health of the capitalist economy remains the profitability of the capitalist sector and the movement in profits globally.  That decides whether investment and production will continue.  This blog has presented overwhelming evidence that profits and investment are highly correlated and in that order – see our latest book, World in Crisis.

The US corporate sector ended 2018 with record levels of profits/earnings, rising some 20%, the highest rate since 2010, when the US economy rebounded from the Great Recession.  But this profit jump was a one-off.  It’s been driven by huge corporate tax cuts and exemptions from tax in repatriating cash reserves from abroad that the major US companies held.  And US corporate revenues have been boosted by a very sharp fall in input costs, namely the fall in the oil price during 2018.

Globally, profits were still growing in the middle of 2018.  But profits growth has slowed in Germany, China and Japan.  Only the US has experienced any acceleration.  And if the US profits growth is a one-off, as argued above, global profits growth is likely to fall away sharply in 2019.

Slowing profits growth and a rising cost of (corporate) debt, alongside all the politico-economic factors of an international trade war between China and the US, suggest that in 2019 the likelihood of a global slump has never been higher since the end of the Great Recession in 2009.