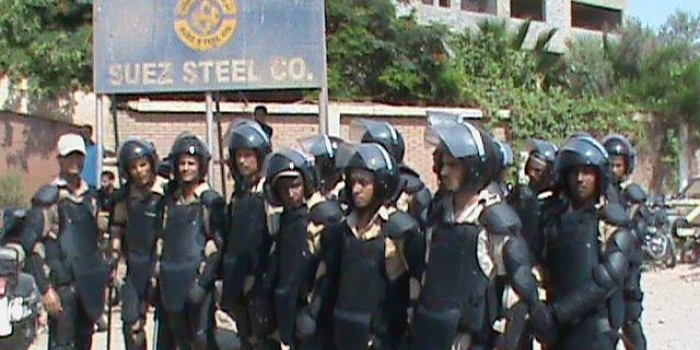 Recent nationwide labor protests have found themselves confronted by extraordinary measures of repression as the country continues to weather economic struggles, austerity measures and rising inflation.

The Egyptian government has deployed security forces to quash any suggestion of labor action in the public or private sector, arresting workers and subsequently imposing exceptional legal measures to punish those detained.

Since 2016, the state has increasingly moved toward suppressing labor protests. According to an annual report published by the Egyptian Center for Economic and Social Rights (ECESR), there were 726 labor protests over workplace demands, claims of administrative mismanagement and corruption in 2016. These protests have particularly been driven by grievances over working conditions and demands for increased wages and bonuses in light of recent economic reform policies.

The latest ECESR report states that the 726 labor protests in 2016 made up the majority of the 1,736 protests witnessed throughout the year. This report attributes the decrease in the total number of protests to restrictive legislation regulating the right to demonstrate and security crackdowns on dissent.

The state’s crackdown has prompted solidarity campaigns and petitions — in Egypt and abroad — demanding that the criminal charges against dozens of workers be dropped. Addressed to executive authorities, the petitions have been signed by hundreds of rights workers, labor unions and federations, denouncing the deployment of security forces to suppress protesting workers.

According to a report issued by the Center for Trade Union and Workers Services (CTUWS), security forces have forcibly dispersed seven labor protests over the past year, while 28 workers have been prosecuted and nine others are standing trial. The report adds that corporations have also dismissed 271 workers, union members and labor leaders due to their involvement in labor action.

The state’s initial response to a potential problem in the cog of military production — the Alexandria Shipyard Company has been managed by the Defense Ministry since 2007 — was particularly extreme, Awwad says, as the workers had not forced a work stoppage but had organized a sit-in on May 23 and 24, 2016. They were demanding an increase in salary to align with the national minimum wage, payment of overdue bonuses and for work at stalled production lines to recommence. Military police forces were deployed to the shipyard on May 24, where they surrounded the workers’ sit-in.

The military trial commenced in June 2016 and, due to a series of adjournments, has become an ongoing spectacle that has extended into the new year.

Of the Alexandria Shipyard Company’s 2,300 workers, some 1,200 have still not been allowed to recommence work with the company since its management imposed a lockout on May 24 and therefore cannot collect their full salary. Awwad says that 32 workers, including the 26 standing trial, remain barred from entering the company’s premises. The state has also moved to force 19 of the workers standing trial to tender their resignations in exchange for bail.

“There is increasing pressure from military officials upon the remaining workers to submit their resignations,” says Awwad.