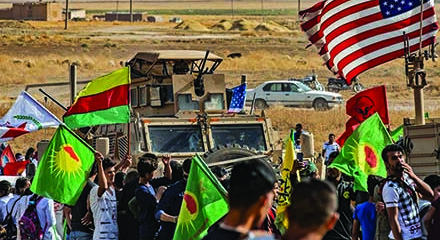 The months-long bargaining for a tit-for-tat deal with Turkey has eventually reached its culmination, with Donald Trump withdrawing his token forces from the Turkish-Syrian border area.

On the election campaign trail, Trump can now claim to be the president who stood firm and fulfilled his promise of ending US involvement in a meaningless and never-ending war. He also hopes that the withdrawal will counter the increasingly vocal opposition he faces within the Republican Party – perhaps those who might have supported an impeachment process will now step back and rally behind him. And he can present himself as a president standing against the establishment: an incompetent state department bureaucracy, a military top brass that needs to be kept in its place, and a financial bureaucracy which is too conservative to do what is required to boost the American economy.

Opponents of withdrawal in the US and across Europe have nothing but praise for the Kurdish forces and the so-called Syrian Democratic Forces (SDF) for their sacrifices. Understandably then, they condemn Trump for giving the green light to Turkish president Recep Tayyip Erdoğan and stabbing in the back a valued ally. Former envoys to the region and former commanders bemoan missed opportunities and ground lost after years of painstaking work.

However, Trump is not the only one under fire. Erdoğan has already lost his Teflon, having failed to win three elections in a row. He stays in power because of the support of rightwing nationalists. The last local elections demonstrated that he and the circle around him have lost a large part of their previous constituency. He is faced by ever-increasing opposition from within his own party – the recent meeting he held with MPs and local leaders from all over Turkey to iron out “difficulties” showed everybody that it will be impossible to hold the party together for much longer.

Meanwhile, the economy is going down the drain. Face-lift statistical operations have failed to hide the severe difficulties caused by idiosyncratic Erdoğanomics – and the fact that the president’s incompetent son-in-law runs the finance ministry is causing him to lose credibility even among the most faithful of party hacks.

Erdoğan needs the support of the military top brass and security bureaucracy even more than during the days of the attempted coup in 2016. Therefore he is prepared to go along with any military adventure – not only in Syria, but also against the axis of Cyprus-Egypt-Israel in relation to Mediterranean gas exploration – so long as Turkish officialdom is in favour.

The overreaching aims of the bureaucracy involve conquest and ethnic cleansing, a fervent nationalism blessed by Islam. And the ever-expanding armaments industry, mainly financed by the state, is an important part of the equation. The ‘outsider capitalists’ of Turkey, whose numbers have been growing relatively recently, are willing to support military adventures. However, Turkish finance capital is rather more wary, since it needs good relations with the centres of power in Europe as well as Asia. This sector is also more realistic in understanding that, if you talk the talk, you should also walk the walk. And to walk the walk you need a big stick – which is not yet available, despite the rapid economic development of recent decades.

The build-up of Turkish armed forces on the eastern bank of the Euphrates has been going on for months. However, the attempt by Turkey to take part in the redistribution of spheres of influence in the Middle East is like a puppy contesting a juicy bone with a pack of vicious dogs. Russia and the USA have been dismantling the old alliances with local powers to form new and hopefully better ones. But for Turkey neither going it alone nor changing allies in such an unpredictable situation is easy.

When it attempted to assert its independence by purchasing a surface-to-air missile system from Russia, the US retaliated by withdrawing its offer to Ankara of advanced F-35 jets. Erdoğan has only just avoided yet another round of sanctions.

For a while, as the war-like rhetoric from Turkish sources increased, the US was able to stop an invasion of northern Syria by creating a ‘joint security mechanism’, whereby Turkish aircraft and a limited number of troops took part in joint patrols with the US forces. As part of the joint patrol plans the US forced Kurdish forces to abandon their positions and withdraw from the border zone. Meanwhile, the air patrols provided sufficient opportunities to assess and determine targets deep into Syrian territory. As usual, these concessions, which were gobbled up quickly without any thanks, proved insufficient for the Turkish side, which, even while the joint patrols were taking place, indicated that its aims of occupying a large swathe of Syrian territory could not be thwarted by sugar-coated pills.

When Trump decided to withdraw the few dozen soldiers and military equipment involved in the joint patrols, everybody expected Turkey to immediately fill the vacuum, since the SDF forces had already retreated. However, as Trump’s tweets have increased, we were able to see that he has attached some conditions to the Turkish invasion.

Now it seems that only a limited operation will be allowed initially. Any step over the mark would be met with economic sanctions that could cripple Turkey. Trump’s brutally honest tweet – “If Turkey does anything that I, in my great and unmatched wisdom, consider to be off limits, I will totally destroy and obliterate the economy of Turkey (I’ve done before!)” – should be taken seriously.

And, according to Trump, Turkey would have to take responsibility for the custody of Islamic State prisoners and their dependants, with all the entailing responsibilities. However, this is a bit confusing, since it would require at least a 100-mile-deep incursion into Syria by Turkey, yet Erdoğan showed a map of his intended “peace corridor” during his speech to the United Nations general assembly on September 241 and stated that his initial proposal of invasion covers an area just 30 miles deep.

Erdoğan is due to meet Trump in November and it seems that the initial incursion into Syrian territory will be limited to the zone between Ras Al-Ain (Serê Kaniyê) and Tell Abyad (Grê Sipî) – the two border crossings abandoned by US and SDF troops. However, the Turkish invasion may not stop there, and if so the going would get much tougher, since operating without air cover, let alone air superiority, would be very costly – as demonstrated by previous incursions into Syria. Noises coming from the US seem to imply that the Turkish airforce is to be removed from ‘air tasking orders’, which means there is no ‘joint operations environment’ with the US airforce. In other words Turkey’s capabilities in Syrian airspace have been severely curtailed.

However, Turkey’s loyal opposition has actually given its approval to Erdoğan’s proposal for unlimited action for one year in Syria and Iraq. Only the leftwing, pro-Kurdish Peoples Democratic Party (HDP) is against his plans.