Erdogan has used same techniques as Trump to de-democratize Turkey 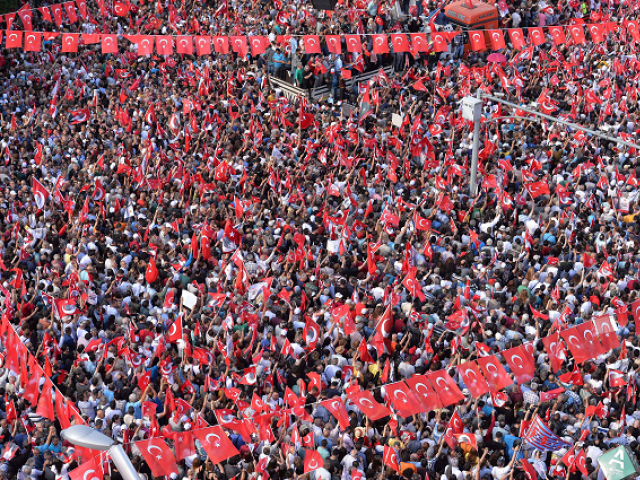 Recep Tayyip Erdogan, the president of Turkey, began his legitimate political career at the turn of this century with a push for more political pluralism in a Turkey that had long been dominated by an elite, secular military.

Now that he has won another term, Erdogan’s rise as an authoritarian strong man is a key lesson to America about how Trump could move the US in a similar direction. Trump’s antics on racism and immigration have distracted the American public from the massive numbers of federal judgeships Mitch McConnell is allowing Trump to fill with far right ideologues, after having blocked or run the clock out on Obama appointees. Trump is in a position to shape the officer corps, ensuring that fellow travelers of John Kelly and Jim Mattis take control. Trump is attempting to create public distrust of the print and broadcast media, substituting what is virtually Trump Administration t.v. over at Fox as well as far, far right kooks on the internet like the Breitbar crew and Alex Jones. Trump strongly allied with the Christian religious Right, who are his most reliable constituency. All of these steps were taken by Erdogan, as well, and over time they created an elective dictatorship where civil society is often just banned and there is no free press.

Turkey had had elections from 1950, but its politics were carefully circumscribed to the center-right and center-left. About once a decade the military made a coup, trying to destroy the political left and unions, in which it succeeded by the 1990s. The elite also excluded the Muslim religious Right from legitimate politics, fearing that it would appeal to people in farming towns in the countryside, then the majority of the population, and so would prove able to marginalize the urban, modern, educated elite. When a man of the religious Right became prime minister in 1997, the military shut him down.

Erdogan had those religious Right leanings, but seemed genuinely, once his party began winning elections in 2002, to want more pluralism for Turkey. His party championed joining Europe in hopes that European human rights law would force the Turkish secular elite to relinquish some power and allow his Justice and Development Party freely to contest elections.

Erdogan’s party reached out to Turkey’s beleaguered Kurdish minority, many of whom were rural and religiously conservative. Its increasing popularity made it possible for Erdogan to forestall any further military coups and to break the power of the secular, arrogant officer corps. He allied with the right wing religious cult, the Gulen Movement, using it to win parliamentary seats and constituencies he might not have won on his own, at least initially.

And then, having regularly won elections, Erdogan abandoned his earlier commitments to pluralism and adopted an increasingly strident rhetoric. His party, once the victim of judicial politics and authoritarian plotting, became increasingly intolerant. He shut down the Gezi Park youth movement in 2013, insisting that civil society activism is illegal and interpreting Turkey’s elections as electoral dictatorship (i.e. rulers are elected but then after the election the voters just go back to being sheep who should do as they are told). His ability to instruct the Turkish media not to even cover the protests about turning Gezi Park into a mall (Erdogan is all about malls and mosques, mosques and malls) revealed for the first time how limited had been Turkey’s baby steps toward democracy.

In 2015, a new, pro-Kurdish party emerged, the Democratic Peoples’ Party, which managed to get some 13% of seats in parliament and to steal voters away from Justice and Development. It reduced Erdogan’s party to only about 42%, and interfered with Erdogan’s plans for one-party rule and for major constitutional changes to make Turkey a presidential system akin to Putin’s Russia.

Personally, I think Erdogan deliberately went to war with the Kurds in order to polarize the country and to discredit the Democratic Peoples’ Party. The radical Kurdistan Workers’ Party (PKK) did supply him with a pretext, in attacking Turkish police and soldiers, but it is laughable to identify the civil Democratic Peoples’ Party with the PKK, as he essentially did. He gradually had that party’s leaders arrested for being pro-Kurdish or just for defying Erdogan. One of them ran for president against him from jail. A hung parliament allowed him to call snap elections later that year (2015), in which his party won a bare majority and so had the way clear to change the constitution.

The following year, perhaps afraid that Erdogan would be unstoppable if left in power much longer, the secretive Gulen moles that Erdogan had helped seed in the military and throughout the Turkish government launched a coup attempt. The whole episode is still murky. Erdogan and Fethullah Gulen (who had been granted asylum in the US in 1998 during the secular military purge of fundamentalists) had used one another to create a winning Muslim Right coalition. Now they had turned on one another.

Erdogan survived the coup, which appears to have convinced him to dismantle Turkish democracy almost entirely. He had hundreds of thousands of people fired from their jobs and tens of thousands imprisoned, simply for belonging to or sympathizing with the Gulen movement (a crime of which he and his own party had been guilty right up to July 2016). He closed entire universities and fired their professors because they had Gulen associations. Most of these actions were based on guilt by association. 200,000 people did not make a coup, and likely most of Erdogan’s victims did not even know about it.

Worse, tens of thousands of Erdogan’s victims were not even Gulenists. They were just ordinary critics of him and of his party. Some were even leftists. All were purged– fired or blackballed or imprisoned. People who objected to his dirty war in eastern Anatolia against dissident Kurdish villagers were likewise punished. What margin had existed in the press or the universities for criticizing Erdogan and his policies was removed systematically. Dissident or critical professors and journalists were fired or even sent to jail. Wealthy cronies of Erdogan bought up remaining independent media and then sang Erdogan’s tune to the public.

Seeking to whip up Sunni-Turkish nationalism, Erdogan invaded both Iraq and Syria, throwing his military weight around in unprecedented ways. The specter of a militarily imperialist Turkey has neighbors worried.

Erdogan then got his constitutional changes in a bid to become president for life. He purged the judiciary and either changed the laws or just got his men to rule the way he wants. He purged the officer corps and the police. He allied with the far right secular nationalist party, which gives him a reliable 66% of the seats in parliament in most elections, but leaves him with at least 58% even when his own party’s support falls to 42%. He increasingly has rejiggered the parliamentary system to allow decisions by simple majority, and has even arranged for the president to have so much power that he can overturn legislation he doesn’t like at will.

The current election is a sham in which state television did not even bother to broadcast news of enormous rallies conducted by Erdogan’s main rival. Just the broadcast media manipulation in favor of Erdogan would be enough to render the election unfair, even if there were not widespread charges of ballot-stuffing.

How Erdogan, over the past 8 years or so, dumped Turkey’s democratic experiment and grabbed up power into his greedy hands should be an object lesson to Americans. It can happen here.