Erdogan: Main enemy is at home … and abroad

Posted by Editor on Saturday, September 7, 2019 · Leave a Comment 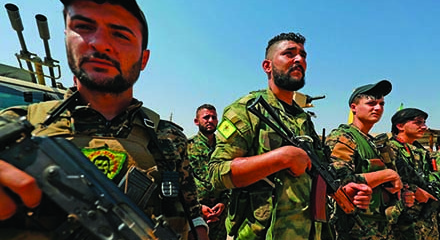 As the temperature rose to an unprecedented high at the beginning of August, the Turkish army was poised to invade Rojava in Syria. While this was not intended as a game of brinkmanship with the US, it certainly forced the Americans to act to stop the foray, which would have completely upset existing arrangements.

In the first week of August a tentative agreement was reached with the US to establish a security corridor along the eastern section of the Turkish-Syrian border. The Ankara agreement forestalled any unilateral intervention, and in return the US made a few token gestures in Turkey’s direction.

A joint operation centre was established in the Urfa province of Turkey allowing for joint helicopter patrols along the Syrian border. Turkish infantry units were withdrawn five kilometres from the border and heavier weaponry a further nine kilometres. A compromise not fully accepted by the Turkish side, since a 40-kilometre security zone had been sought.

Now Turkey may join land patrols along the border, but not take independent military action or move against democratically elected councils in Kurdish areas of Rojava. In this way the US wants to appear as an ‘honest go-between’ – brokering an agreement between Turkey and the Kurds without actually bringing the parties together.

The Ankara agreement was met with scepticism in some circles of the Turkish armed forces, as well as by many politicians. Their main fear was that the US might force Turkey to accept a Kurdish-dominated administration as a legitimate partner in negotiations in the future, which would eventually lead to an independent Kurdish entity along the southern borders of Turkey.

The most pro-US amongst the Turkish top brass is the minister of defence, Hulusi Akar, who was military commander during the coup attempt of 2016. Now he is the preferred trouble-shooter of president Recep Tayyip Erdoğan. Akar has succeeded in keeping in check extremist nationalists and ‘Eurasians’ within the top ranks of the armed forces.

During the negotiations that led to the Ankara agreement his pro-US stance met with distinct unease. As a result, towards the end of August, when promotions and demotions were decided at the traditional summer meeting of the Supreme Military Council, many of the usual procedures were bypassed in order to create a command structure fit for the Erdoğan regime. More mumblings among the generals.

Five senior generals resigned within a week of the SMC announcements – among them two who had commanded Turkey’s ruthless operations in Syria. When they were appointed to their new posts, they became the superiors of other generals who were more senior. In the traditional appointment system that had been something not permitted.

The resignations showed that the Syrian operations were considered problematic for the career of the top brass. While the ‘diplomat’ generals continue to occupy cushy jobs, such as positions in Nato, a group of ‘fighting’ generals were stuck in the mud and they were not happy about that.

Despite the Ankara agreement, Turkish armed forces are engaged in Iraqi Kurdistan. Now the third Operation Claw is underway near Iraq’s border with Syria.

Turkey’s air superiority over the entire region allows its planes, as well as army helicopters and unmanned drones, to fly with impunity – bombing raids to ‘eliminate’ hostile targets are a daily occurrence.

In parallel to the cross-border actions two successive military operations on the Turkish side of the border have been launched. These so-called ‘Decimate’ operations are under the command of the Gendarmerie – troops under the control of the ministry of interior – covering almost all the Kurdish provinces. According to the military, the orders issued to the troops are “Seek, find, kill”.

And, while military operations have dominated the agenda, the ‘civilian’ struggle against the Kurds has gained a new vigour. Mayors of three principal Kurdish cities, elected in March this year, were summarily dismissed by the ministry of interior and ‘administrators’ appointed. They promptly dissolved the elected city councils, and dismissed officers and workers. The dismissed mayors had not been disqualified before the local elections despite vigorous security vetting. Nor have they been charged. But this is Kurdistan. Nobody worries about such niceties.

The Erdoğan regime cannot survive without keeping the support of the security bureaucracy. Therefore new military campaigns and police clamp downs against the Kurds are considered indispensable. The ‘rule of law’ has long been suspended in Kurdistan, and the threat of extending this situation over the whole country is ever-present.

Selahattin Demirtaş, the former president of the pro-Kurdish People’s Democratic Party (HDP), who had been remanded in custody on a trumped-up charge for just under three years, has finally been released. This was just before his application to the European Court of Human Rights was due to be heard on September 18. While in jail, he was convicted on another charge and sentenced to four years and eight months imprisonment, pending an appeal. According to the rules, the sentence must be offset by his remand period. So he should now be released under judicial control. But we will see.

The court’s decision to release Demirtaş came at the beginning of the judicial year, which was marked with a ceremony held in the presidential palace in Ankara. But 51 of the 78 provincial bar associations declined to attend, claiming that holding such an event in the seat of the executive is an affront to their independence. More significantly, 12 justices of the court of appeal also stayed away. A sign of growing opposition.

While Kurds are the main focus of the military and diplomatic efforts of the Erdoğan regime, the actions of the Syrian government in Idlib province has revealed the fallacy of Turkey’s ‘security through force’ approach. One of the 12 Turkish observation posts was hit during the Syrian attack on the town of Khan Shaykhun. A militia vehicle attempted to reach the post but was precision-bombed. A Turkish convoy was dispatched. Russian forces came to the rescue. They surrounded the observation post to avoid any further escalation.

The ministry of foreign affairs is claiming that no observation post will be relocated while one of them remains marooned behind enemy lines, but in reality the relief convoy has been stopped in its tracks, and two more observation posts are in the line of new offensive. Foreign minister Mevlüt Çavuşoğlu has reminded his Russian counterpart of the ceasefire conditions signed by both states. The Russian ministry of foreign affairs responded curtly that the Sochi agreement does not provide for a ceasefire with “terrorists” and that Turkey is not fulfilling its obligations.

Erdoğan acted quickly and visited Vladimir Putin. Another ceasefire was hastily arranged. However, the jihadists in Idlib regarded that as a betrayal. A large group of their supporters crossed over the Syria-Turkey border and staged a demonstration in Cilvegözü against the new Turkish-Russian agreement. Troops fired into the air and used CS gas to disperse the crowd.

In the same area a large group of refugees fleeing from areas controlled by the Syrian regime are also gathering along the border, demanding to be let into Turkey. The pressure from such refugees is also being felt by Greece, because since the start of new Syrian offensive in Idlib there has been an increasing number sailing into the Aegean Islands aboard small boats. The calm summer seas are a bonus for the human traffickers, especially as the Greek authorities are turning a blind eye in order to put pressure on the European Union to force it to act.

All this has laid bare the untenable position of the Erdoğan regime in trying to perform a balancing act between Russia and the US, which are attempting to re-establish their spheres of influence in the Middle East. Every move and posture pretending that Turkey is in a position of strength leads to yet another stumble. However, Erdoğan is able to maintain a strong grip at home despite this – mainly because his loyal opposition is as reluctant as he is to give an inch to the democratic demands of the Kurdish people.