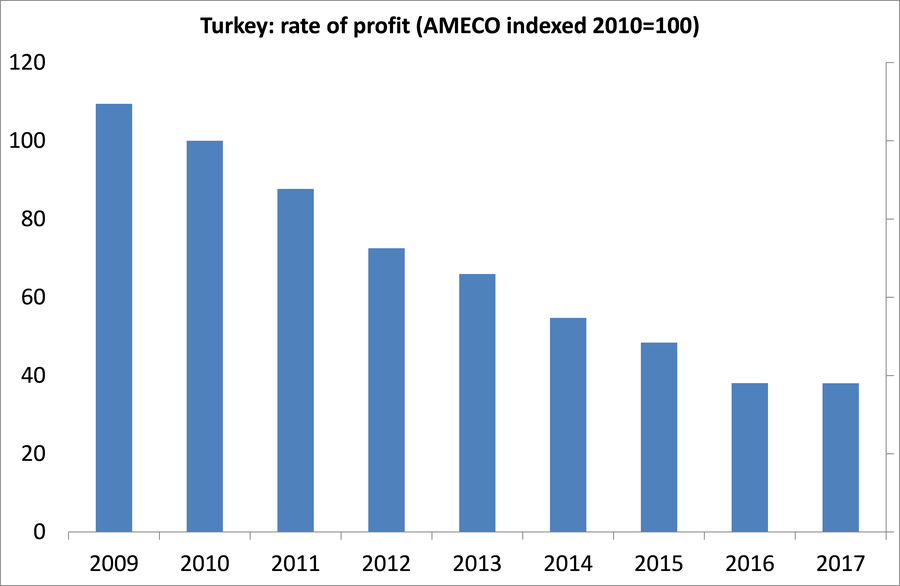 Turkey is a country of 80m people and 56m adults had the right to vote in Sunday’s general election.  87% of those turned out.  Incumbent President Recep Erdogan, of the Islamic AKP, was re-elected with 52% of the vote, with the main opposition candidate, Muharrem Ince, of the secular centre-left CHP getting 31%. Erdogan’s AKP saw its share of the vote in parliament fall back from 49.5% in the last election of November 2015 to 42.4%. The loss seems to have gone to the ultra-nationalist MHP which won 11.2% and will now form a coalition government with Erdogan’s party.

Erdogan’s rule is now cemented.  He had already got a referendum through to increase sharply the powers of the president.  Now he has won a snap general election just before the oncoming economic crisis facing the country.

Since the failed military coup in 2016, Erdogan has imposed emergency powers in a period of unprecedented repression. The coup aimed at stopping further Islamic rule by Erdogan and restoring the secular state that began with Kemel Ataturk in 1917.  Above all the military wanted to put Turkey back into the fold of international capital and the EU.

With its defeat, Erdogan has moved fast to destroy any further vestiges of opposition and to break with the political interests of international capital, as represented by the EU, the IMF and the UN.  More than 100,000 people have been detained. Tens of billions of assets have been seized and 150,000 people have been purged, losing not only their jobs but their passports (and those of their spouses) and branded national security threats. Often, they lose their housing (tied to government employment) and their pensions. “One elite is being displaced by another: property is changing hands, new cadres are being groomed for the civil service, the universities are being emptied of one class of intellectuals to be replaced by more loyal alternatives, and regime-friendly capital is gaining access to state largesse, including the bounty resulting from asset seizure.”

Under Erdogan, corruption is even more the order of the day (as it is in several of the larger emerging economies like Mexico and Brazil which also have elections this year).

The key reason for the early election was the impending economic crisis in Turkey.  At first sight, the Turkish economy seems to be racing along – with real GDP growth officially at 7% plus.  But this is illusory.  Much of this growth is in unproductive real estate expansion and grandiose government projects.

The profitability of Turkish capital has been in steep decline since the end of the Great Recession.  And economic growth was slowing fast in 2016 at the time of the coup.  But since then Erdogan has engendered a boom mainly in real estate and banking through ultra-low interest rates and public spending.  Foreign investment has come in to finance this unproductive investment. 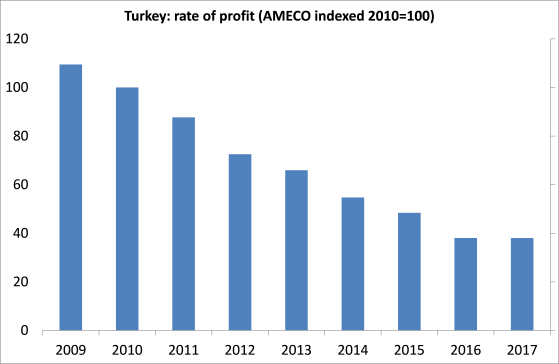 This credit boom has pushed the inflation rate to double digits.

exposing Turkey to the risks of capital flow reversal at any time. 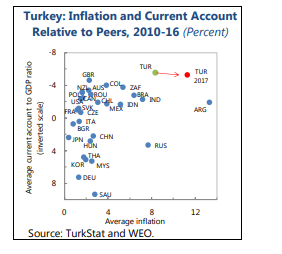 And that’s the issue ahead.  Rising global interest rates and the growing trade war initiated by US President Trump are going to hit the so-called emerging capitalist economies like Turkey.  The cost of borrowing in foreign currency will rise sharply and foreign investment is likely to reverse.  Turkey has external debt equivalent to 50% of its GDP, and that is rising rapidly.  It must roll over 20% of GDP annually in foreign debt and more than one third falls due within the next 12 months.

Turkey is now near the top of the pile for a debt crisis, along with Argentina (already there), Ukraine and South Africa. 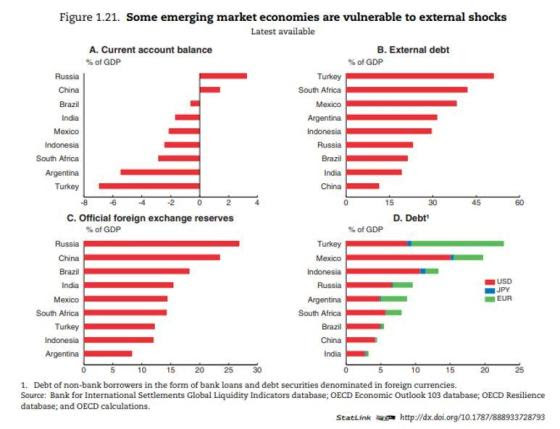 Erdogan makes a ‘populist’ appeal to his domestic support that he is not going to be told what to do by the IMF or the EU. But the result is that the Turkish lira has been diving in the last year as foreign investors get out of Turkey for fear on an impending debt crisis.

Erdogan may have won the election; he may have increased his powers for suppression and autocracy; and he may continue to stick up his finger to international capital. But Turkey’s economy is on (turkey) legs and is vulnerable to a major slump if the global trends on the cost of foreign capital and the end of globalisation intensify.