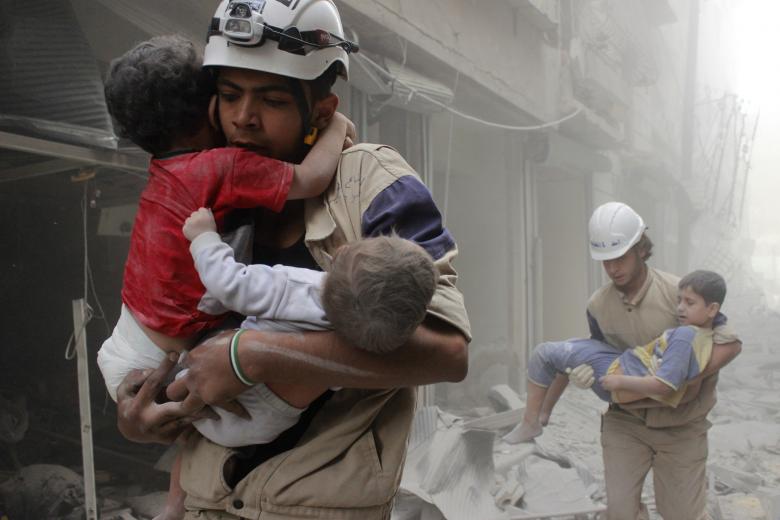 During a Barcelona concert on April 13, Roger Waters denounced the Syrian White Helmets as “a fake organization that exists only to create propaganda for jihadists and terrorists.” Warning that the groups’ unverified claims about chemical weapons attacks across insurgent-held territory were aimed at triggering Western military intervention, Waters cautioned his audience, “If we were to listen to the propaganda of the White Helmets and others, we would encourage our governments to start dropping bombs on people in Syria. This would be a mistake of monumental proportions for us as human beings.”In fact, Waters had first hand experience with the powerful pro-war PR operation behind the White Helmets. Back in October 2016, a public relations firm representing the White Helmets called The Syria Campaign attempted to recruit Waters by inviting him to a lavish dinner organized by a Saudi-British billionaire, Hani Farsi. The rock legend and renowned activist was told that by signing on to the organization’s mission, he could help “elevate the voices of Syria’s peaceful heroes”Just days before his recent concert in Barcelona, Waters was lobbied again to support the White Helmets, this time by an eccentric French photojournalist affiliated with what he described as a “very powerfull [sic] syrian network.” The activist demanded to join Waters on stage and deliver a message for the “children of syria.”Waters did not respond to either request.These emailed solicitations from White Helmets representatives and activists were provided by Waters to the Grayzone Project, and are published in full at the bottom of this article. The documents demonstrate how the organization’s well-funded public relations apparatus has targeted celebrities as the key to the hearts and minds of the broader Western public.Unlike many other A-listers, however, Waters took time to research the White Helmets and investigate its ulterior agenda. “I was quite suspicious after I was invited to that [White Helmets] dinner,” Waters told the Grayzone Project, “and now my worst suspicions have been confirmed.”

The October 2016 dinner invite was delivered to Waters by a representative for the Corniche Group, an international holding company belonging to the family of the London-based Saudi billionaire Hani Farsi. Farsi was seeking Waters’ presence at a fundraising dinner he had organized on behalf of The Syria Campaign.

The Syria Campaign is a well-funded public relations front established to promote The White Helmets as a group of heroic rescuers who require the protection of Western militaries. Through series of petitions and public demonstrations, The Syria Campaign has unsuccessfully pushed for a No Fly Zone in Syria that would have likely resulted in the kind of Western military intervention that toppled Libyan President Moammar Qaddafi and destabilized Libya.

The slick PR firm has also resorted to astroturfed public stunts like a pro-White Helmets flash mob and orchestral performance at New York City’s Grand Central Station where participants were paid up to $600 each.

Farsi’s relationship to the The Syria Campaign had been kept private until now. A Syrian-British oil tycoon named Ayman Asfari has taken a much more vocal role with the PR group, providing it with seed money to advance his mission to stimulate US and UK support for regime change in Syria. Waters was informed that Asfari’s wife, Sawsan, would be on hand for the 2016 White Helmets fundraising dinner.

Over the past two years, The Syria Campaign has secured endorsements of the White Helmets’ work from actors including George Clooney, Aziz Ansari, Ben Affleck, and pop stars like Coldplay and Justin Timberlake. The Syria Campaign also helped orchestrate the production of an Oscar-winning Netflix documentary about the White Helmets in 2017. In the email to Waters, a Corniche Group staffer urged the singer to watch that film and provided him with a link to its trailer.

I would encourage the celebrities who’ve signed to endorse the White Helmets to stop supporting them because we know what they are, Waters told the Grayzone Project. I don’t blame them for having bought in to it. On the face of it, it felt plausible that the White Helmets were just good people doing good things. But now we know they’re trying to encourage the West to drops bombs and missiles illegally in Syria.

Waters said he also concluded that The Syria Campaign—the PR firm behind the White Helmets — was not simply the humanitarian voice it purported to be, but a corporate outfit that represented much more prosaic interests.

The Syria Campaign’s top funder, Asfari, was described by the UK Independent as one of the “super rich” Syrian exiles poised to oversee the rebuilding of the country if Assad were removed, and to presumably reap lucrative contracts in the process.

In its invite to Waters, The Syria Campaign presented him with links to articles that read like press releases for the White Helmets: one from Time Magazine and another by The Guardian urging the Nobel Prize committee to honor the organization with its highest award. The Syrian Campaign appeared to be taking credit for generating both pieces.

The reality of the White Helmets is much more disturbing than its hired PR guns have cared to admit. Not only have the White Helmets operated exclusively alongside Islamist extremist insurgents, including the local Al Qaeda affiliate Jabhat al-Nusra and ISIS, its members have participated in several documented public executions, and helped extremists dispose of beheaded corpses of those they’ve killed.

Unable to discount the documented facts about the White Helmets’ ties to jihadist insurgents, The Syria Campaign published a lengthy report last year dismissing all critical reporting about the organization as the result of a vast Kremlin-directed conspiracy.

In its email to Waters, The Syria Campaign took credit for having “helped these rescue workers attract more than $15 million in government funding and turned them into household names.”

In fact, since the White Helmets were founded in Turkey by a former British MI5 officer named James Le Mesurier, the group has received at least $55 million from the British Foreign Office, $23 million or more from the United States Agency for International Development’s Office of Transition Initiatives — the State Department’s de facto regime change arm — and untold millions from the Kingdom of Qatar, which has also backed an assortment of extremist groups in Syria including Al Qaeda.

The White Helmets are routinely relied upon by the governments that fund them as a primary source on alleged chemical attacks, including the most recent incident in Douma. When Defense Secretary James Mattis cited “social media” in place of scientific evidence of a chemical attack in Douma, he was referring to video shot by members of the White Helmets. Similarly, when State Department spokesperson Heather Nauert sought to explain why the US bombed Syria before inspectors from the OPCW could produce a report from the ground, she claimed, “We have our own intelligence.” With little else to offer, she was likely referring to social media material published by members of the White Helmets.

A final appeal from an eccentric activist

In the days leading up to Waters’ April 13 concert in Barcelona, an assistant received an email from a French photojournalist named Pascal Hanrion who described himself as “a militant with the syrian white helmets to denounce crimes against humanity in syria,” and part of a “very powerfull [sic] Syrian network.” Unlike the corporate PR professionals of The Syria Campaign, Hanrion appeared to be a freelance activist.

Back in July, 2016, Hanrion ran a marathon-style race through the Swiss Alps wearing a white helmet presented to him as a gift by rescue workers from the town of Jisr al-Shugour, which is located in the Al Qaeda-controlled Syrian providence of Idlib. According to journalist Jenan Moussa, the homes of original Jisr al-Shugour residents have been handed over by Al Qaeda’s local affiliate to Chinese Uighur jihadists and their families.

In his email, Hanrion requested to join Waters on stage so he could send a message to the “children of Syria” reminding them, “you are not forgotten!”

Instead of allowing the eccentric activist on stage, Waters delivered a message of his own, urging his audience to deconstruct the wall of pro-war narratives brick-by-brick.

What we should do is go and persuade our governments not to go and drop bombs on people, Waters implored the crowd, inspiring gales of applause. And certainly not until we have done all the research that is necessary so that we would have a clear idea of what is really going on. Because we live in the world where propaganda seems to be more important than the reality.

Waters’ speech and the emails to him from The Syria Campaign and Hanrion are below:

And final one! Many thanks, really appreciate your help with this. Have a good evening and
speak again soon. All my best, Tanya
Dear Mr Waters
I am writing to invite you and a guest to join Hani at a fundraising dinner that he is hosting on
Monday 21st November on behalf of The Syria Campaign. The dinner will take place at the
Bulgari Hotel, 171 Knightsbridge, London, SW7 1DW from 7.30pm.

The Syria Campaign launched in 2014 with a mission to elevate the voices of Syria’s peaceful
heroes and accelerate international efforts towards an end to the conflict. The Asfari Foundation
provided the start-up funds for The Syria Campaign and we will be joined on the evening by
Sawsan Asfari.

Since its launch, the organisation has been working with peaceful Syrian groups to build them
an international profile. Most notably, their work with The White Helmets has helped these
rescue workers attract more than $15 million in government funding and turned them into
household names – narrowly missing out on the Nobel Peace Prize this year. I would encourage
you to watch the incredibly powerful documentary ‘The White Helmets’, which can be viewed
online on Netflix. A trailer for this is available here: https://www.youtube.com/watch?
v=3wj4ncIEDxw

You may also find the following articles from the Guardian and Time Magazine of interest:

You will also be joined at the dinner by James Sadri, the Director of The Syria Campaign, who
will talk about how this important work has the power to unlock major institutional funds for
peaceful Syrian groups and more importantly, how it helps to shift the conflict towards peace.

I very much hope you are able to join him and would be grateful if you could RSVP to myself at
Tanya com> by Monday 31st October.

I’m a militant with the syrian white helmets to denounce crimes against humanity in syria,
especially against childre.

last sunday, I made an important happening in paris, climbing to the top of centre georges
pompidou museum: all information on my facebook page

I qm in barcelona to do the same, in relation with an very powerfull syrian network.

please, could I meet Roger Water to ask to invite me few seconds on the stage tomorrow during
the concert to send a message with him to the children of syria “you are not forgotten”!

please would you call me on

I’m walking in barcelona schearching a building to climb, my mobile phone is not connected with
internet, so I write to you from an internet cafe.

thank you so much,

Awareness about war in Syria: “Running for the children of Syria with a white helmet” on
Facebook, Youtube and by Google.

Max Blumenthal is a senior editor of the Grayzone Project at AlterNet, and the award-winning author of Goliath and Republican Gomorrah. His most recent book is The 51 Day War: Ruin and Resistance in Gaza. Follow him on Twitter at @MaxBlumenthal.