Financial crisis ten years on: another slump on the horizon? 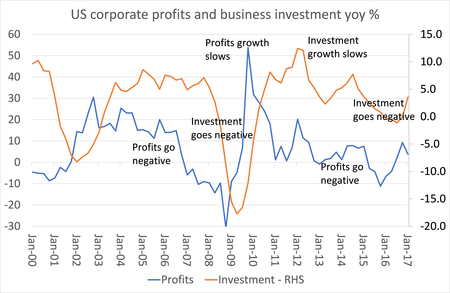 It’s ten years on to the day since the global financial crash began with the news that the French bank, BNP had suspended its sub-prime mortgage funds because of “an evaporation of liquidity”.

Within six months, credit tightened and inter-bank interest rates rocketed (see graph above).  Banks across the globe began to experience huge losses on the derivative funds that they had set up to profit from the housing boom that had taken off in the US, but had started to falter.  And the US and the world entered what was later called The Great Recession, the worst slump in world production and trade since the 1930s.

Ten years later, it is worth reminding ourselves of some of the lessons and implications of that economic earthquake.

First, the official institutions and mainstream economists never saw it coming.  In 2002, the head of the Federal Reserve Bank, Alan Greenspan, then dubbed as the great maestro for apparently engineering a substantial economic boom, announced that ‘financial innovations’ i.e. derivatives of mortgage funds etc, had ‘diversified risk’ so that “shocks to overall economic will be better absorbed and less likely to create cascading failures that could threaten financial stability”.  Ben Bernanke, who eventually presided at the Fed over the global financial crash, remarked in 2004 that “the past two decades had seen a marked reduction in economic volatility” that he dubbed as the Great Moderation. And as late as October 2007, the IMF concluded that “in advanced economies, economic recessions had virtually disappeared in the post-war period”.

Once the depth of the crisis was revealed in 2008, Greenspan told the US Congress, “I am in a state of shocked disbelief”.  He was questioned “in other words, you found that your view of the world , your ideology, was not right, it was not working” (House Oversight Committee Chair, Henry Waxman). “Absolutely, precisely, you know that’s precisely the reason I was shocked, because I have been going for 40 years or more with very considerable evidence that it was working exceptionally well”.

The great mainstream economists were no better.  When asked what caused the Great Recession if it was not a credit bubble that burst, Nobel Prize winner and top Chicago neoclassical economist Eugene Fama responded: “We don’t know what causes recessions. I’m not a macroeconomist, so I don’t feel bad about that. We’ve never known. Debates go on to this day about what caused the Great Depression. Economics is not very good at explaining swings in economic activity… If I could have predicted the crisis, I would have. I don’t see it.  I’d love to know more what causes business cycles.”

Soon to be IMF chief economist, Olivier Blanchard, commented in hindsight that “The financial crisis raises a potentially existential crisis for macroeconomics.” … some fundamental [neoclassical] assumptions are being challenged, for example the clean separation between cycles and trends” or “econometric tools, based on a vision of the world as being stationary around a trend, are being challenged.”

But then most of the so-called heterodox economists, including Marxists, did not see the crash and the ensuing Great Recession coming either.  There were a few exceptions:  Steve Keen, the Australian economist forecast a credit crash based on his theory that “the essential element giving rise to Depression is the accumulation of private debt” and that had never been higher in 2007 in the major economies.  In 2003, Anwar Shaikh reckoned the downturn in the profitability of capital and the downwave in investment was leading to a new depression. And yours truly in 2005  said: “There has not been such a coincidence of cycles since 1991. And this time (unlike 1991), it will be accompanied by the downwave in profitability within the downwave in Kondratiev prices cycle. It is all at the bottom of the hill in 2009-2010! That suggests we can expect a very severe economic slump of a degree not seen since 1980-2 or more”  (The Great Recession).

As for the causes of the global financial crash and the ensuing Great Recession, they have been analysed ad nauseam since.  Mainstream economics did not see the crash coming and were totally perplexed to explain it afterwards. The crash was clearly financial in form: with collapse of banks and other financial institutions and the weapons of mass financial destruction, to use the now famous phrase of Warren Buffett, the world’s most successful stock market investor.  But many fell back on the theory of chance, an event that was one in a billion; ‘a black swan’ as Nassim Taleb claimed.

Alternatively, capitalism was inherently unstable and occasional slumps were unavoidable.  Greenspan took this view: “I know of no form of economic organisation based on the division of labour (he refers to the Smithian view of a capitalist economy), from unfettered laisser-faire to oppressive central planning that has succeeded in achieving both maximum sustainable economic growth and permanent stability.  Central planning certainly failed and I strongly doubt that stability is achievable in capitalist economies, given the always turbulent competitive markets continuously being drawn toward but never quite achieving equilibrium”.  He went on, “unless there is a societal choice to abandon dynamic markets and leverage for some form of central planning, I fear that preventing bubbles will in the end turn out to be infeasible.  Assuaging the aftermath is all we can hope for.”

Most official economic leaders like Blanchard and Bernanke saw only the surface phenomena of the financial crash and concluded that the Great Recession was the result of financial recklessness by unregulated banks or a ‘financial panic’.  This coincided with some heterodox views based on the theories of Hyman Minsky, radical Keynesian economist of the 1980s, that the finance sector was inherently unstable because “the financial system necessary for capitalist vitality and vigour, which translates entrepreneurial animal spirits into effective demand investment, contains the potential for runaway expansion, powered by an investment boom.  Steve Keen, a follower of Minsky put it thus: “capitalism is inherently flawed, being prone to booms, crises and depressions.  This instability, in my view, is due to characteristics that the financial system must possess if it is to be consistent with full-blown capitalism.”   Most Marxists accepted something similar to the Minskyite view, seeing the Great Recession as a result of ‘financialisation’ creating a new form of fragility in capitalism.

Of the mainstream Keynesians, Paul Krugman railed against the neoclassical school’s failings but offered no explanation himself except that it was a ‘technical malfunction’ that needed and could be corrected by restoring ‘effective demand’.

Very few Marxist economists looked to the original view of Marx on the causes of commercial and financial crashes and ensuing slumps in production.  One such was G Carchedi, who summed that view up in his excellent, but often ignored Behind the Crisis with: ““The basic point is that financial crises are caused by the shrinking productive base of the economy. A point is thus reached at which there has to be a sudden and massive deflation in the financial and speculative sectors. Even though it looks as though the crisis has been generated in these sectors, the ultimate cause resides in the productive sphere and the attendant falling rate of profit in this sphere.”  Agreeing with that explanation, the best book on the crash remains that by Paul Mattick Jnr, Business as usual.

And indeed, profitability in the productive sectors of the capitalist major economies was low historically in 2007, as several studies have shown.  In the US, profitability peaked in 1997 and the rise in profitability in the credit boom of 2002-6 was overwhelmingly in the financial and property sectors.  This encouraged a huge rise in fictitious capital (stocks and debt) that could not be justifies by sufficient improvement in profits from productive investment.

The mass of profit began to fall in the US in 2006, more than a year before the credit crunch struck in August 2007.  Falling profits meant over-accumulation of capital and thus a sharp cutback in investment.  A slump in production, employment and incomes followed i.e. The Great Recession.

Since the end of that recession in mid-2009, most capitalist economies have experienced a very weak recovery, much weaker than after previous post-war recessions and in some ways even weaker than in the 1930s.  A recent Roosevelt Institute report by JW Mason found that “there is no precedent for the weakness of investment in the current cycle. Nearly ten years later, real investment spending remains less than 10 percent above its 2007 peak. This is slow even relative to the anemic pace of GDP growth, and extremely low by historical standards.”

So the Great Recession became the Long Depression, as I described it, a term also adopted by many others, including Keynesian economists like Paul Krugman and Simon Wren-Lewis.  Why did the Great Recession not lead to a ‘normal’ economic recovery to previous investment and production rates?  The mainstream economists of the monetarist school argue that governments and central banks were slow in cutting interest rates and adopting ‘unconventional’ monetary tools like quantitative easing.  But when they did, such policies appeared to have failed in reviving the economy and merely fuelled a new stock market and debt boom.

The neoclassical school reckons that debt should be cut back as it weighs on the ability of companies to invest while governments ‘crowd out’ credit because of their high levels of borrowing.  This ignored the reason for high government debt, namely the huge cost of bailing out banks globally and the slump in tax revenues from the recession.  In opposition, the Keynesians say the Long Depression was all due to ‘austerity’ ie governments trying to reduce government spending and balance budgets.  But the evidence for that conclusion is not compelling.

After ten years and a decidedly long, if very weak, economic recovery phase in the ‘business cycle’, are we due for another slump soon?  History would suggest so.  It won’t be triggered by another property slump, in my view.  Real estate prices in most countries have still not recovered to 2007 levels and even though interest rates are low, housing transaction levels are modest.

The new trigger is likely to be in the corporate sector itself.  Corporate debt has continued to rise globally, especially in the so-called emerging economies.  Despite low interest rates, a significant section of weaker companies are barely able to service their debts.  S&P Capital IQ noted that a record stash of $1.84trn in cash held by US non-financial companies masked a $6.6trn debt burden. The concentration of cash of the top 25 holders, representing 1% of companies, now accounts for over half the overall cash pile. That is up from 38% five years ago.  The big talk about the hegemoths like Apple, Microsoft, Amazon having mega cash reserves hides the real picture for most companies.

Profit margins overall are slipping and in the US non-financial corporate profits have been falling.

And now central banks, starting with the US Federal Reserve, have started to reverse ‘quantitative easing’ and hike policy interest rates.  The cost of borrowing and existing debt servicing will rise, just at a time when profitability is flagging.