First ISIS, then Iran: Kurdish-Iranian leader has eyes on Iran 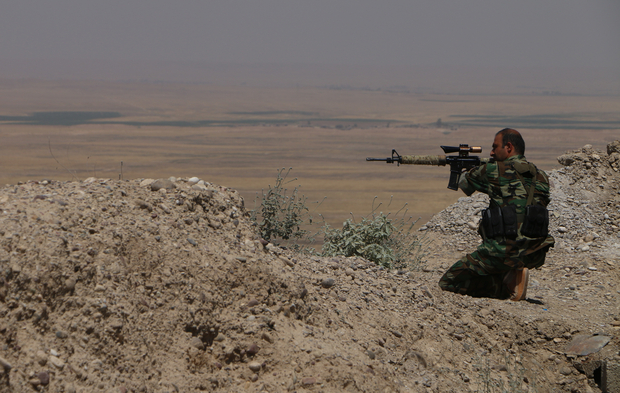 Erbil, Iraq – A small range of hills outside of Kirkuk has been the frontline with the Islamic State since the group fled the city last year. From a military base on top of those hills flies a Kurdish flag. But the base does not house Iraqi Kurdish peshmerga (fighters). These hills are under the control of a leftist Iranian Kurdish group, the Kurdistan Freedom Party, also known as the PAK.

Their commander-in-chief, Hussein Yazdanpana, cuts a colourful figure, his looks and thick moustache often drawing comparison with the Russian dictator Stalin. His uniform is emblazoned with the Iraqi Kurdish region’s flag, and the orange-and-white insignia of his own group. He sports a battlefield radio, and a chest rig filled with ammunition clips.

Yazdanpana’s force of hundreds of fighters has managed to help turn the tide against IS in northern Iraq, gaining valuable military experience in the process and, they proudly boast, training from members of the US-led coalition in Iraq.

Once IS is defeated, Yazdanpana plans to use that experience and training against the PAK’s more established enemy – Tehran. It is part of the same battle against Islamic extremism, as he sees it, and also highly personal.

“The way Daesh [IS] has been killing Yazidis [a Kurdish religious community], it was like what Iran did to the Kurds after the [1979] Iranian revolution,” he said. “I was young when it happened. The regime’s forces were killing entire villages with knives and machetes.

”In Iran we will fulfill our duty. It is always Tehran that has been fighting us, killing, executing, but the world never reports on this. We now have very active, strong forces. The world can count on these forces to oppose barbaric forces in the world.”

Many Iranian Kurdish groups retreated across the border after the revolution, and up until two years ago the PAK’s influence was limited to a few mountain villages near the border. Its fighters were poorly trained and their equipment outdated. That has all changed with the rise of IS.