Trump, Netanyahu and the burial of the two-state ‘solution’ for Israel 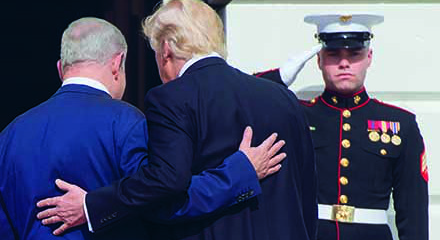 On February 15 the desiccated corpse of the two-state ‘solution’ (2SS) to the conflict between the Israeli Zionist settler state and the colonised Palestinian Arab people was finally laid to rest. One is tempted to say ‘RIP’, but it is far more likely to rest in war than peace. The interment took place at a White House press conference, during which the new leader of the ‘international community’ absolved his smiling protégé, Binyamin (‘Bibi’) Netanyahu from even pretending to pursue the phantom of the 2SS.1 This ended a long-standing official commitment of the US, formalised by GW Bush in his ‘road map’ speech (June 24 2002),2 but informally dates back to the Bill Clinton presidency.

As I have explained in previous articles,3 no major Zionist party is genuinely prepared to accept a sovereign Palestinian state ‘alongside Israel’ west of the river Jordan. But, whereas Labour Zionists (now part of the Zionist Camp led by Yitzhak Herzog) were ready to play along with the endless ‘peace process’, Netanyahu and most of his Likud party, egged on by their ultra-fanatic partners, had lost patience with this pretence, and were eager to edge towards annexing the West Bank (the tiny, densely populated Gaza Strip is not on the menu just yet). So in April 2014 Barack Obama’s secretary of state, John Kerry, concluded that due to Israel’s obstructiveness the ‘peace process’ had gone “poof”.4

In order to understand the full significance of Trump’s declaration, which effectively allows Netanyahu a free hand in dealing with the Palestinian issue, we must note two previous landmark events. The first of these was a summit meeting summoned by the preternaturally persistent Kerry as a last-ditch attempt to resuscitate the 2SS. It was held during the last week of February 2016 in the Jordanian Red Sea port of Aqaba and was kept secret for a year, until the story was leaked to Ha’aretz (probably by someone very close to Kerry), which published it on February 19 2017.5 The participants, apart from Kerry, were Netanyahu, Jordan’s king Abdullah II and Egypt’s president Abdel Fattah al-Sissi. The president of the Palestinian (so-called) Authority, Mahmoud Abbas, was not invited (in order not to embarrass him with the concessions that would be forced on him), but was kept informed.

Netanyahu was presented by his three interlocutors with an offer he could not openly refuse, as it addressed all his previous pretexts for demurring. According to Ha’aretz:

Kerry … crafted a document that included principles for the renewal of talks between the Israelis and the Palestinians in the framework of a regional peace initiative with the participation of the Arab countries. The plan he formulated in early 2016 was identical to the one he presented at the end of that year – three weeks before Donald Trump entered the White House. The following are the six principles: