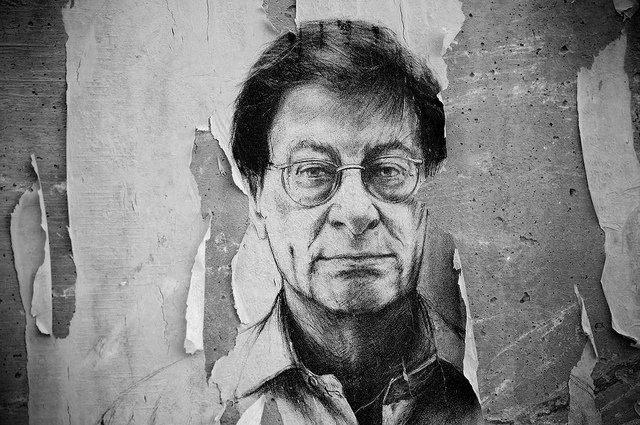 Sometimes, the best way to understand the complexity of a conflict is through art.

Words can echo in people’s hearts as much as images can inspire a revolution. They are composed in different forms to create prose, songs, and poetry with messages that live forever. And during the war and political conflict between two states who sought recognition in their independence, a Palestinian man taught us that the best tool to persuade others and raise awareness about ideals is through poetry. This man was Mahmoud Darwish, a Palestinian poet who lived through the Palestine-Israeli conflict. His ties to this historic issue go back to 1948 when he was just 7 years old and his family was forced to flee their village in Western Galilee after Israeli soldiers arrived to establish the State of Israel. A year later, when his family came back, Darwish found his home completely destroyed and without a single book to read. Soon, he learned that his homeland wasn’t his anymore (he had trespassed it illegally), and it now belonged to the State of Israel. From that point and on, he felt a sense of frustration and injustice that he could only express through words – words that together created beautiful passages of poetry.

and it is the one near the word of god,

a ceiling of clouds

and it is the one far from the adjectives of nouns,

the map of absence

and it is the one tiny as a sesame seed,

a heavenly horizon … and a hidden chasm

and it is the one poor as a grouse’s wings,

holy books … and an identity wound

and it is the one surrounded with torn hills,

the ambush of a new past

To our land, and it is a prize of war,

the freedom to die from longing and burning

and our land, in its bloodied night,

is a jewel that glimmers for the far upon the far

and illuminates what’s outside it …

As for us, inside,

Darwish’s messages to the Palestine people were hidden between the lines of many of his poems. He went from a “present-absent alien” under Israeli law to an internationally renowned poet. His inspiration came from what he saw as the unfair treatment of Arabs in Israel, who were under the state’s military rule from 1948 to 1986, and their status as second-class citizens. But he became clever in his poetry in order to get in as little trouble as possible. In fact, he stopped being direct in his writing after a poem he wrote in school got him into trouble with the authorities. The poem questioned why an Israeli child should have privileges a Palestinian didn’t: “You have a house, and I have none. You have celebrations, but I have none. Why can’t we play together?”

In Jerusalem, and I mean within the ancient walls,

I walk from one epoch to another without a memory

to guide me. The prophets over there are sharing

the history of the holy … ascending to heaven

and returning less discouraged and melancholy, because love

and peace are holy and are coming to town.

I was walking down a slope and thinking to myself: How

do the narrators disagree over what light said about a stone?

Is it from a dimly lit stone that wars flare up?

no one behind me. I see no one ahead of me.

All this light is for me. I walk. I become lighter. I fly

then I become another. Transfigured. Words

mouth: “If you don’t believe you won’t be safe.”

I walk as if I were another. And my wound a white

on the cross hovering and carrying the earth.

I don’t walk, I fly, I become another,

transfigured. No place and no time. So who am I?

I am no I in ascension’s presence. But I

think to myself: Alone, the prophet Muhammad

spoke classical Arabic. “And then what?”

Then what? A woman soldier shouted:

Is that you again? Didn’t I kill you?

Darwish showed an outstanding talent for writing. His first poetry book, Asafir bila ajniha (Wingless Birds), was published when he was only 19 years old. Then, he became editor at Rakah, a publication funded by the Israeli Communist Party, which he was a member of. Later on, he became an assistant editor at the Israeli Workers’ Party publication Al Fajr. But that didn’t mean he had surrendered to the state’s will. Ironically, while he edited the pages of these publications, he wrote “Leaves of the Olive Tree,” “A Lover from Palestine,” and “End of the Night” – poems that inspired the Palestinian resistance against the Israeli government.

“A State of Siege”

A woman asked the cloud: please enfold my loved one

My clothes are soaked with his blood

If you shall not be rain, my love

Saturated with fertility, be trees

And if you shall not be trees, my love

Saturated with humidity, be a stone

And if you shall not be a stone, my love

In the loved one’s dream, be a moon

So said a woman to her son

He goes on to add:

During the siege, time becomes a space

That has hardened in its eternity

During the siege, space becomes a time

That is late for its yesterday and tomorrow

Darwish was imprisoned in 1960 for traveling and reciting his poetry without a state permit. A poem of his, “Identity Card,” got him under house arrest after it turned into a protest song. In the ‘70s, Darwish moved to Moscow to study at Moscow University. Then, he moved to Egypt and, later, Beirut, where he worked at the Palestine Research Center, and as editor for the journal Palestine Affairs, where he worked for almost a decade. Finally, after being exiled from Palestine for several years, he was allowed to return home.

“I Have a Seat in the Abandoned Theater”

I have a seat in the abandoned theater

the final act without longing … not because of anything

other than that the play was not written

as in the war days of those in despair, and an autobiography

of the spectators’ impulse. The actors were tearing up their scripts

and searching for the author among us, we the witnesses

sitting in our seats

I tell my neighbor the artist: Don’t draw your weapon,

and wait, unless you’re the author!

Then he asks me: And you are you the author?

So we sit scared. I say: Be a neutral

hero to escape from an obvious fate

He says: No hero dies revered in the second

scene. I will wait for the rest. Maybe I would

revise one of the acts. And maybe I would mend

what the iron has done to my brothers

He responds: You and I are two masked authors and two masked

I say: How is this my concern? I’m a spectator

He says: No spectators at chasm’s door … and no

one is neutral here. And you must choose

your part in the end

The Palestinian poet received many awards while he was alive. In his poetry, we find the pain, chaos, and sadness that the conflict between the two states has brought to many. The conflict between Palestine and Israel has been an ongoing struggle since the mid-20th century. Before that, the land was a peaceful place where different religions coexisted. Today, Israel governs most of the land in the area, and there have been talks about a two-state resolution, but no agreement has become a reality yet. Darwish wrote over 30 poetry books and eight books of prose that are still read and loved by those who wish to see Palestine as an independent state. He used metaphors from everyday association that any Palestinian would recognize. His writings are taught in many schools in the Arab world, and the people of his homeland remember him as a role model and a peaceful symbol of the resistance.

Featur image: Poster of Mahmoud Darwish on a wall in Palestine.