The freedom to say “No”: Interview with dismissed Turkish academic and Yeniyol editor Uraz Aydin 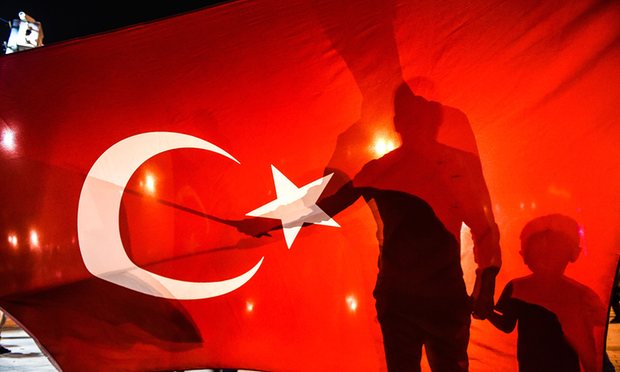 This interview was posted on Links International from Left East before the constitutional referendum in Turkey. However, it covers many points that remain relevant regardless of the result of the referendum.

For the last several months in Turkish politics, the party-state’s agenda has been dominated by two interconnected operations: consolidation of power and elimination of opposition. The former will culminate in the constitutional referendum of April 16 this year, which will, if successful, transform Turkey from a parliamentary into a presidential republic, further strengthening Erdogan’s personal rule and making it nearly impossible to electorally challenge AKP hegemony in the foreseeable future.

Whole cities are plastered with giant “Evet!” (Yes!) posters, which also dominates the TV channels, but opinion polls are still running surprisingly close. To shore up the nationalist vote, the state even produced a deliberately calculated diplomatic scandal with the Netherlands over the latter’s unwillingness to have Turkish ministers campaign on its territory.

At the same time, dozens of “Hayir!” (No!) rallies/ events are banned for mysterious “security reasons.” Indeed, the elimination of bases of opposition, which was intensified after the unsuccessful coup of July 2016, is now in full swing. While initiated to eliminate the sources of the coup, the state of emergency has now turned to leftist and Kurdish forces, generously applying to them the “terrorist” label. A particularly widespread form of silencing the opposition has been the firing of civil servants.

Talking to LeftEast about all this is Uraz Aydin, an editor of the Marxist journal Yeniyol, who has recently been fired from his faculty position at Marmara University. To support fired academics like Uraz, the Union of Educational Workers, Eğitim Sen, has set up a solidarity fund. You can contribute to it (anonymously or publicly) by donating here.

Rossen Djagalov (RD): What I wanted to start with is the experience of being fired. At LeftEast we have been listing numbers of fired civil servants, closed media outlets, but that’s a rather impersonal picture. What did the firing look like from your point of view? What does it mean in practiced, being so fired? Do you have a sense of who produced those lists?

Uraz Aydın (UA): Who made those lists is another question: I’ll return to it later on. What happened to us is not simply being fired. We have been excluded from all public service positions. With this decree, our citizenship status was downgraded. Now we are second-class citizens. Some of our rights as citizens have been removed. For example, I don’t have a passport now: it has been annulled. The technical justification is that the state can launch a court case against me and I should remain in the country. In practice, the state doesn’t want the formation of an oppositional Turkish diaspora of the kind that appeared after the 1980 coup.

While I can be legally employed by, say, a private university, given this regime of fear, I cannot imagine a private university agreeing to put on is faculty lists black-listed people like me. All my professional career—my PhD, my scholarship, my teaching, my service for my university; I am 40 year-old-now now and still a research assistant because my university administration has made a point of not promoting activist faculty—has been annulled with this decree.

The question who did it would take a longer answer. Who decided on the lists of people to be fired—we don’t know. I can speak most knowledgeably about the category I belonged to, namely, signatories of the January 2016 petition “We will not be a party to this crime.” The crime being referred to is what the Turkish state was doing at the time [second half of 2015] in the Kurdish Southeast and the choice of war Erdogan made with respect to the Kurdish movement. Erdogan had decided, “No more negotiations with the Kurdish movement. We have to go to war.” Kandil (the PKK leadership) was ok with this. That’s another problem we can talk about.

So, this petition was a protest against the destruction of Kurdish cities by the Turkish army. As soon as it came out, Erdogan burst out in anger against the signatories, calling us dark people, traitors, vowing that we would pay the price.

RD: But were the lists composed by the university administrators—deans, presidents—or were they composed somewhere above.

UA: You don’t have to be a detective of coure, to find the list of signatories—they were online, but the work of compiling lists was done by universities and passed on to state. Some universities dithered—they didn’t want to let go of some of their better-known professors. Some, like Marmara, my university, waited, but there was big pressure to produce and pass on the lists. The same kind of pressure is put now on Galatasaray U, Bogazici U, Mimar Sinan U, Middle Eastern Technical U.

RD: So in your universities, the list comprises petition signatories and who else?

UA: In my university, it was primarily petition signatories, but taken as a whole, the biggest part of dismissed Turkish academics are suspected members of the Gülen movement (or FETO, Gülenist Terror Organization, as the regime likes to call them). We’ll never know for sure who is and who is not. I cannot speak particularly knowledgeably about them. Until the two fell out in 2013, AKP had promoted many Gülenist cadres in the academy as a counterpoint to secularists.

But specifically, the campaign against the petition signatories had three distinct functions. The first was to expel leftist militants (trade-union related or not) who had been visible in various social justice struggles at their universities. People who were on the first line of resistance. The message was also to the second line: if you are like them, you, too, will end up like this.

Another target was specifically the word “peace.” The regime wants to say to us: be careful. Never let anyone put your name and the word “peace” on the same page. This was the punishment for the West (Istanbul, and the big cities in Western Turkey) expressing solidarity with the (Kurdish) Southeast. You are in the West—so shut the fuck up—and don’t talk about what we are doing in the Southeast.

The third function has a more historical importance. In Turkey, and elsewhere as well, but in Turkey specifically, leftist ideas never achieved social hegemony, but in the sphere of cultural production, they have been hegemonic. Internationally, in the world of Turkish poetry, who do you know—Nazim Hikmet, of course; in prose—Yasar Kemal; in film—Yilmaz Guney. In cinema, poetry, social sciences, universities, the producers of qualitatively valued products are inspired by leftist ideas, which came in a certain way from Marxism, of course. So the expulsion of academics is part of the regime’s attempt to break the left’s cultural hegemony and make the conservative-nationalist perspective hegemonic. Just last week, the government created the National Culture Council. They have—the AKP has—the social base. They are consolidating it, but they need the cultural means of production. Ideology is always an abstract thing, but it is produced and reproduced in concrete, and distributed in concrete, material ways. Until recently, they lacked media. They have the media pretty much under control now. So they need cinema, they need universities, they need TV series. Cinema may be more difficult. Universities, where we are working, are a part of this terrain of cultural production that AKP wants to conquer to achieve hegemony.
March 31, 2017

Uraz AYDIN has worked as a research assistant at the Communications Faculty of Marmara University for 17 years. He was dismissed with the decree of 7 February 2017 issued in the context of the state of emergency because of his signature in the Academics for Peace petition. He works on sociology of culture, political philosophy and communication theory. A translator of Ernest Mandel, Daniel Bensaid, Michael Löwy, Enzo Traverso, Gilbert Achcar, he is also the editor of Sosyalist Demokrasi icin Yeniyol, the review of the Turkish section of the IV. International.