Gaza: We thought the house was empty 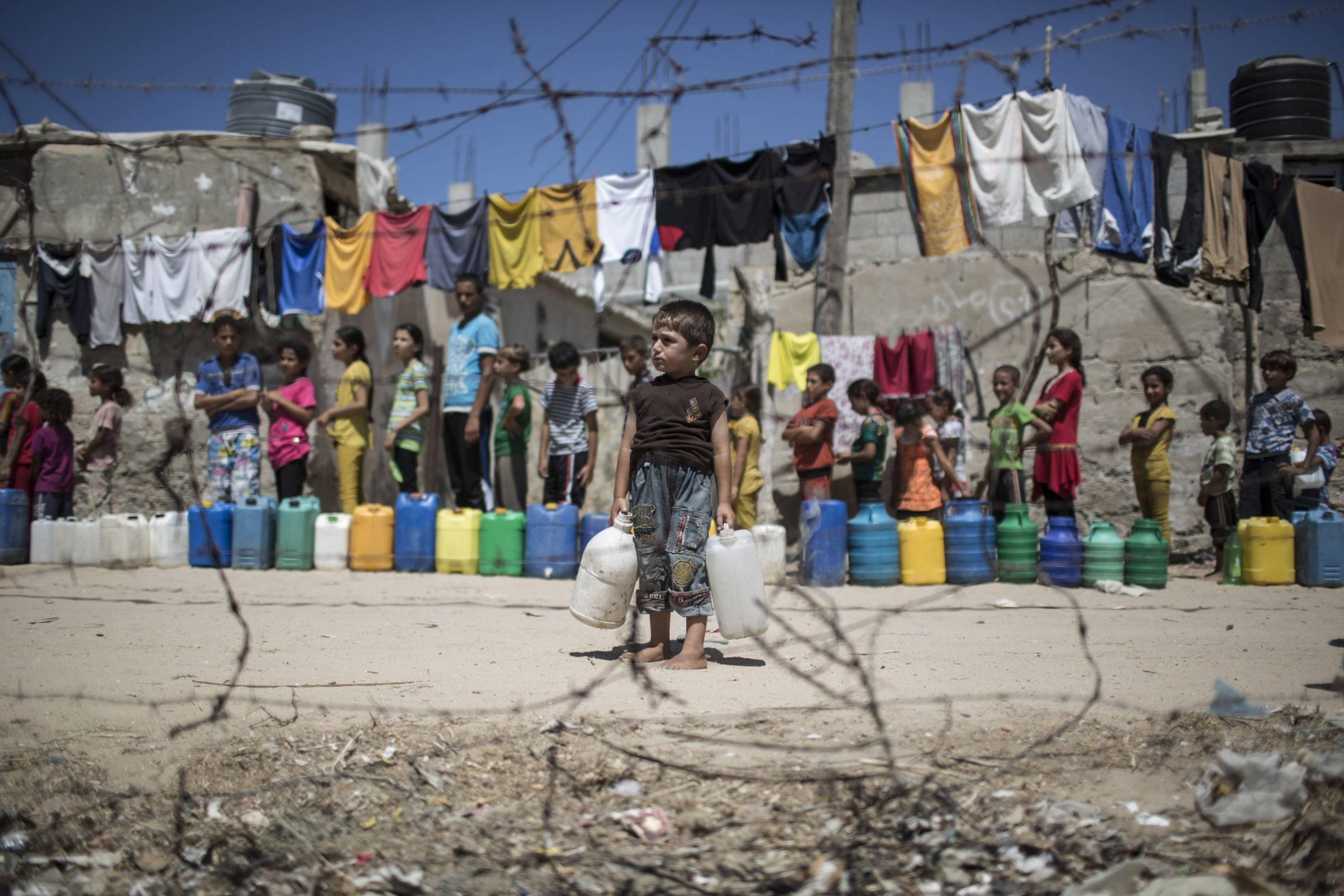 On 13 November 2019, as part of its deadly attack on the people of Gaza, Israeli armed forces bombed a building in the Deir al-Balah neighbourhood of Gaza City. That strike killed eight people: Rasmi Abu Malhous (age 45), Miriam Asoarka (age 45), Yoseri Asoarka (age 39), Sim Mohamed Asoarka (age 13), Mohand Malhous (age 12), Moad Mohamed Asoarka (age 7), and two unnamed toddlers. Israel’s armed forces said that it had targeted an Islamic Jihad commander, although everyone in the neighbourhood said that no such commander lived either in the building or in the area. ‘This was a very simple, poor family, who lives from hand to mouth in a tin shack, with no water or electricity’, said a neighbour. ‘They lived off herding sheep’. Israeli officials said that they thought the house was empty.

What happened on that day has become routine in Gaza, which is a ruin populated by nearly two million people. A garrotted sliver of land that sits on the Mediterranean Sea, Gaza cannot import goods to survive, let alone to reconstruct the damage caused by Israeli attacks. In 2012, the UN’s Palestinian Agency (UNRWA) argued that it would take ‘herculean efforts’ in the areas of health, education, energy, water, and sanitation to make Gaza a liveable place. Three years later, the UN’s Conference on Trade and Development (UNCTAD) suggested that the constant Israeli bombardment of Gaza’s infrastructure, and the Israeli embargo of Gaza, would make the territory ‘unliveable by 2020’. No attempt has been made to reverse the direction.

Last year, the United States cut off funding for UNRWA, which now limps on with no expectation that it will raise the funds needed to staff for schools, clinics, emergency services, relief and social services – key support for Palestinians whose families have been in refugee camps or in exile for five generations. UNRWA plays a major role for Palestinians, especially in Gaza. During the Israeli bombing in mid-November, at least 34 Palestinians were killed. Amongst them was Ameer Rafat Ayad, a Class II student in UNRWA’s Zaitoon Elementary School.

For six decades, the people of Palestine have been denied rights of statehood and rights of citizenship. They have been reduced by the cruelty of history to being refugees and an occupied people. The promise of a two-state solution is now largely eviscerated. Settlements in the West Bank, the attrition of East Jerusalem, and the incarceration of Gaza have made the sovereignty – and even existence – of any Palestinian state on these territories impossible. Benjamin Netanyahu, Israel’s longest serving prime minister, has talked about the full-scale annexation of the West Bank; now the US government has openly said that Israel can claim the settlements as part of its territory, which means that the West Bank can be seized. That is the contempt shown by the Israeli state – and its US enablers – towards the two-state solution. They want a three-state solution – to expel Palestinians to the three states of Jordan, Lebanon and Egypt. That is why the Israeli regime so systematically and callously humiliates the Palestinian population on a daily basis.

This systematic humiliation comes in the searches, the insults, and the imprisonment; in the devastation of olive groves; in the apartheid wall that encircles both the West Bank and Gaza; and it comes at the checkpoints where Palestinians routinely endure denigration. The group Stop the Wall has just published an online collection of essays, Build Resistance Not Walls, where the Palestinian feminist and legal scholar Nadera Shalhoub-Kevorkian writes of the steadfastness of young Palestinian children who refuse to accept the fact of the colonial occupation; and where Hala Marshood and Riya Al’Sanah of Who Profits from the Occupation watch as the world’s billions – including Palestinians – have ‘embarked on exhausting and often deadly journeys in search of a better life’.

A wall only exists if you do not challenge it. If you stand up to it, the wall is merely earth which can crumble. If you resist, you are not standing behind a wall. It is those who are inhumane who are held by the wall. They are hiding behind the wall. It is their wall. It is not our wall. We live in a world without walls.

A one-state solution, the position with the most possibility, is rejected by the Israeli state and large sections of Israeli society on the basis that it would no longer permit the existence of a Jewish state. Palestinians would be a near majority, and such democracy would be unacceptable in an ethno-nationalist state. So, what Israel is saying is that it is content with being an apartheid state and with the annexation of five million Palestinians in the occupied territory who will become second-class residents inside Greater Israel. That is apartheid, as a United Nations report put it two years ago. It is the situation we are confronted with. It is a situation encouraged by the US government. It is the current reality.

At the United Nations a few days ago, Andrew Gilmour, the Assistant Secretary-General for Human Rights noted that nothing can ‘justify the frequent targeting by [Israeli] snipers who know exactly what they are doing and are aiming with immense accuracy – sometimes to kill, more often to injure but with life-changing injuries, including loss of sight and amputation of limbs – thousands of Palestinian children and on a far too frequent basis’. ‘Taken as a whole’, Gilmour said, ‘it is a massive injustice and a systematic example of discrimination and humiliation’.

As Gilmour made his presentation, Israeli forces targeted journalists in Surif, near Hebron, in the West Bank. Muath Amarneh, a Palestinian photographer, was shot in the left eye while he reported on the seizure of Palestinian lands by the Israeli military. ‘The eyes of truth will never be blinded’, chanted his colleagues at a demonstration in Bethlehem. For journalists, this shooting brings back memories of the killing of Yaser Murtaja as he reported from the Gaza fence last year.

Five thousand and fifty Palestinians are currently in Israeli jails, many of them under arbitrary and illegal ‘administrative detention’. Amongst them is Khalida Jarrar of the Popular Front for the Liberation of Palestine, who has previously been arrested in 2015 and 2017, last released on 28 February 2019. She was arrested again on 31 October 2019. This language is farcical – arrest, judge, court, law. None of it is real, since Jarrar is being held outside all legal provisions and is being tortured in an Israeli jail.

The thread of viciousness runs from the Israeli jails to the homes of militants of the Movement for Socialism in Bolivia, where the violence incited by the illegal coup and its leaders has intensified. Whether it is the Israeli government or the neo-fascist racist evangelical political forces in South America, they prefer violence to humanity. No surprise that the new ‘government’ in Bolivia hastily expelled the Cuban medical brigade, preferring death squads over doctors.

Did you know that the 21st century worker who makes the iPhone globally is 25 times more exploited than the 19th century worker who made textiles in Britain? That’s the finding of our Notebook no. 2, The Rate of Exploitation: the Case of the iPhone. In Delhi, our team held a launch for the Notebook at Ambedkar University, where Dr. Satyaki Roy, Associate Professor of Economics at the Institute for Studies in Industrial Development, spoke about the ‘global architecture of hegemony in production networks’. Through the fragmentation of production, Dr. Roy said, global capital has intensified its exploitation of labour; the iPhone Notebook clarifies this tendency. While capital of the Global South, such as Foxconn, exploits labour directly and intensively, most of the total surplus value is appropriated by the transnational firms, based most often in the Global North. Dr. Roy emphasised the need to concentrate not only on those working on the factory floor, but also on informal labour which often produces goods and services for the value chain.

The seminar took place in the shadow of attempts by the Indian government to dismantle whatever labour legislation remains in place. The government has divided up the slate of labour laws into four codes – on wages, on industrial relations, on social security, and on health and working conditions. Thus far, the government has published its code on wages, which is a direct attack on the lives of workers. India’s economy is in the doldrums, with slow growth rates and no end in sight. India’s government seeks to increase growth by attacking labour, a clear demonstration of the Marxist view that wealth is created from the extraction of surplus value. The main trade union federations in the country have said that over 200 million workers will go on strike on 8 January 2020.

These workers, like the Palestinians and the Bolivians, take to the streets with Brecht’s words from In Praise of Dialectics (1951) in their ears,

When the rulers have already spoken,
Then the ruled will start to speak.
Who dares say ‘never’?
Who’s to blame if oppression remains? We are.
Who can break its thrall? We can.
Whoever has been beaten down must rise up!
Whoever is lost must fight back!
Whoever has recognised his condition – how can anyone stop him?
Because the vanquished of today will be tomorrow’s victors!