Is the global economy about to recover from the long depression? 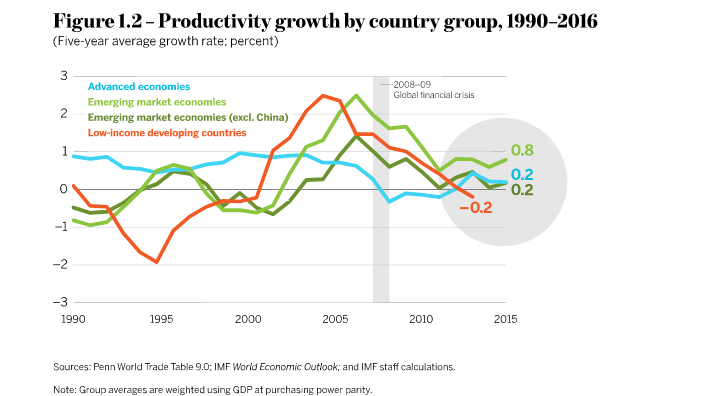 The following is an extract from Michael Robert’s recent blog:  Sunny period followed by showers, in October 2017.

…. In an accompanying report [to Christine Lagarde’s report to the IMF], IMF economists point out that productivity growth has slowed sharply across the world following the global financial crisis.  They attribute this to “the fading impact of the information and communication technology boom, weaker labor and product market reform efforts, skills shortages and mismatches, and demographic factors such as aging populations. In addition, the lingering effects of the global crisis continue to be felt—weak corporate balance sheets, tight credit conditions in some countries, soft investment, weak demand, and policy uncertainty.”

And they refer to the global trade slowdown as another long-term drag on productivity.  “Trade since 2012 has barely kept pace with global GDP. This could point to lower productivity gains in the future—even without taking into account the possibility of trade restrictions.” What worries Lagarde and the IMF is that this cyclical recovery could peter out without any long-term solution to this “productivity puzzle”.

All these things mentioned by the IMF are undoubtedly factors in the Long Depression, but the IMF studiously leaves out the key underlying cause: productivity growth still depends on capital investment being large enough.  And that depends on the profitability of investment.  Under capitalism, until profitability is restored sufficiently and debt reduced (and both work together), the productivity benefits of the new ‘disruptive technologies’ (as the jargon goes) of robots, AI, ‘big data’ 3D printing etc will not deliver a sustained revival in productivity growth and thus real GDP.

Also, there is no sign of any reversal in the continuing rise in inequality in incomes and wealth around the world, which threatens social cohesion and the steady rule of capital over labour:“if we look at inequality within specific countries, especially some advanced economies, we see widening gaps and an increased concentration of wealth among the top earners.” (Lagarde).  The IMF economists find that “In advanced economies, the incomes of the top 1 percent have grown three times faster than those of the rest of the population.”

More jobs for youth and women and more training and education for skills is the IMF answer.  A redistribution of income and wealth through ‘progressive taxation’ is hinted at (“These are all ideas worth exploring”), but public ownership and control of the big monopolies and banks is, of course, not mentioned.

Indeed, the IMF’s employment policies are the old neoliberal ones of ‘flexible labour markets’.  The IMF points out that if women participated in the labor force in the same numbers as men, GDP could increase by as much as 5 percent in the US, 27 percent in India, and 34 percent in Egypt, to name just three examples.   But it has little to say on the chronic sore (in what Marx called the reserve army of labour) which modern capital has used to exploit the global workforce: namely, the massive level of youth unemployment globally.

A recent speech by Mario Draghi, head of the ECB, exposed the failure of capitalism to provide jobs at decent pay and with a future for millions of young people.  Draghi pointed out that youth unemployment is not a recent phenomenon. It started with the end of the golden age of capitalism in the early 1970s when unemployment increased from 4.6% to 11.1% by the end of the decade.  In 2007, when total unemployment in the euro area declined to 7.5%, its lowest level since the early 1980s, the unemployment rate for young people was already very high at around 15%.

And then as a result of the Great Recession, it reached 24% and is still about 4 percentage points higher than at the beginning of the crisis in 2007.  The number of young adults participating in the EU labour market, at 41.5%, is very low. That means a large majority is currently in training, studying, or not looking for work.  If we compare youth unemployment with unemployment among people 25 years and older, we discover it is 250% higher. This has hardly changed in the past few years – even in the EU’s largest nations. In the case of young adults the modest increase in employment consisted almost exclusively of temporary jobs. In Spain and Poland more than 70% of young adults have temporary jobs.  This is a permanent unskilled reserve army of labour for capital.

The other reason that the world economy will not sustain this ‘cyclical recovery’ is the still high level of private sector debt.  In its latest Global Financial Stability report, the IMF economists focus on rising household debt.  The IMF starts: “Debt greases the wheels of the economy. It allows individuals to make big investments today–like buying a house or going to college – by pledging some of their future earnings. That’s all fine in theory. But as the global financial crisis showed, rapid growth in household debt – especially mortgages – can be dangerous.”

The report finds: “In the short term, an increase in the ratio of household debt is likely to boost economic growth and employment, our study finds. But in three to five years, those effects are reversed; growth is slower than it would have been otherwise, and the odds of a financial crisis increase. These effects are stronger at the higher levels of debt typical of advanced economies, and weaker at lower levels prevailing in emerging markets.”

More specifically, “our study found that a 5 percentage-point increase in the ratio of household debt to GDP over a three-year period forecasts a 1.25 percentage-point decline in inflation-adjusted growth three years in the future. Higher debt is associated with significantly higher unemployment up to four years ahead. And a 1 percentage point increase in debt raises the odds of a future banking crisis by about 1 percentage point. That’s a significant increase, when you consider that the probability of a crisis is 3.5 percent, even without any increase in debt”.

“What’s the reason for the tradeoff? At first, households take on more debt to buy things like new homes and cars. That gives the economy a short-term boost as automakers and home builders hire more workers. But later, highly indebted households may need to cut back on spending to repay their loans. That’s a drag on growth. And as the 2008 crisis demonstrated, a sudden economic shock – such as a decline in home prices–can trigger a spiral of credit defaults that shakes the foundations of the financial system.”

So the IMF is concerned that the house of cards that is private sector debt will bring down any economic recovery.  In this blog, I have highlighted, not household debt, but corporate debt and the greater risk there.  Corporate debt is very high and rising, while the number of ‘zombie’ companies (those hardly able to meet their debt payments) are at record levels (16% in the US).  At $8.6 trillion, US corporate debt levels are 30% higher today than at their prior peak in September 2008.  At 45.3%, the ratio of corporate debt to GDP is at historic highs, having recently surpassed levels preceding the last two recessions.  That suggests that increased costs of debt servicing from rising interest rates driven by the Fed’s ‘normalisation’ policy could tip things over, unless profitability recovers for the wider corporate sector.

A key word in Lagarde’s address to the great and good at Harvard University was “cycles”.  Lagarde started: “Of course, there are seasonal cycles — like the one we are enjoying right now. Then there are economic cycles. A key challenge in economic cycles is trying to gain perspective on what comes next while you are in the midst of it.”

Yes, what sort of cycle is the world economy in?  Is it the start of a long cycle of boom after depression, at last? Or is a just a short and unsustainable pick-up?  In my book, The Long Depression, in a chapter on cycles, I try to delineate between longer-term cycles of profitability and finance (Marx) and innovation (Kondratiev) and short-term cycles of investment and construction (Kuznets) and capacity utilisation (Kitchin).  The latter cycle of using up spare capacity and working capital generally has a length of just four years, unlike the investment cycle of 8-10 years or the longer profitability cycle (32 years, I claim).

That does not quite fit in with my old thesis of a new slump by 2018.  But that is built round the profitability cycle.  More on this in the future. In the meantime, enjoy the sunshine before the winter.