How Tehran-backed forces are taking over in Iraq 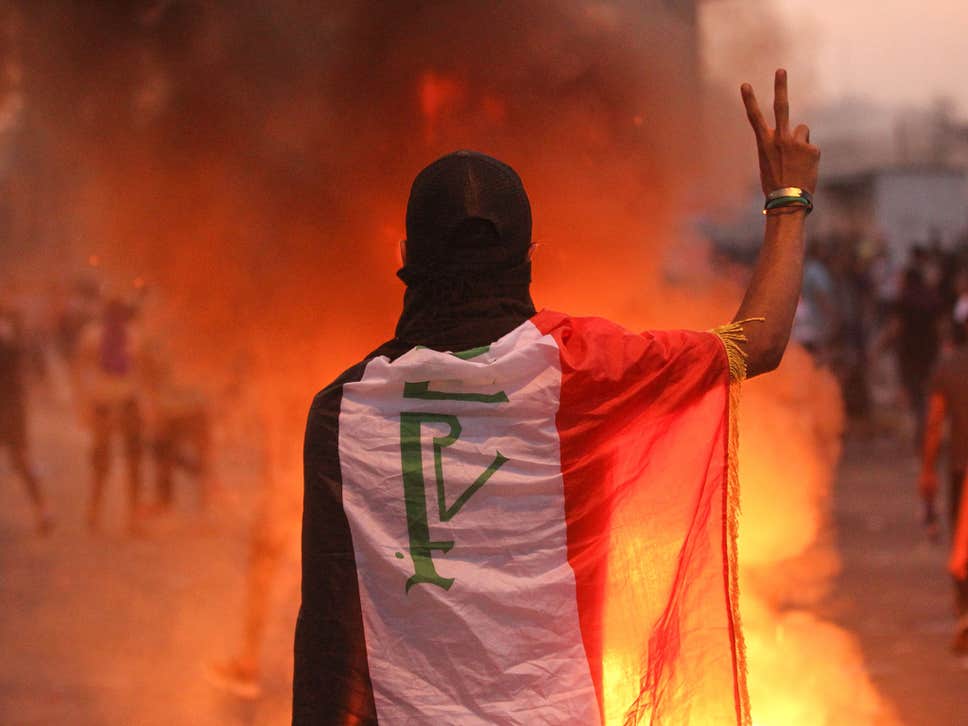 Iraqi security and pro-Iranian paramilitary forces are shooting into crowds of protesters in a bid to drive them from the centre of Baghdad and end six weeks of demonstrations that have challenged the political system to an extent not seen since the fall of Saddam Hussein in 2003.

Police retook three bridges across the Tigris River that lead to the fortified Green Zone on Saturday and are surrounding Tahrir Square, the central focus of the protests.

In al-Rasheed Street, close to the square, police set fire to tents set up by volunteer doctors to treat injured protesters.

At least six people were killed in the latest clashes, four of them by bullets and two by heavy duty tear gas grenades fired directly at the head or bodies of protesters, according to Amnesty International.

It says that 264 people taking part in demonstrations have died since 1 October, though the Iraqi High Commission for Human Rights gives a higher figure of 301 dead and 15,000 injured.

The protests – and the merciless government attempt to stamp them out – are the biggest threat to the power of the Iraqi political establishment since Isis was advancing on Baghdad in 2014. In many respects, the danger to the status quo is greater now because Isis was an existential threat to the Shia majority who had no choice but to support their ruling elite, however predatory and incompetent they had proved in office.

The slaughter of so many demonstrators is similar to the tactics used by Egyptian President Abdel Fattah el-Sisi in 2013 to crush protests opposing his military coup that had overthrown the elected government.

The slaughter of so many demonstrators is similar to the tactics used by Egyptian President Abdel Fattah el-Sisi in 2013 to crush protests opposing his military coup that had overthrown the elected government.

By way of contrast, there was no such violence response to street demonstrations in Baghdad in 2016 , when protesters invaded the Green Zone, or in Basra in 2018, when the government and party offices were set ablaze.

Over the last month-and-a-half, however, there has been repeated use of snipers firing at random into demonstrations or targeting local protest leaders. The people doing the killing are parts of of the government’s highly fragmented security services and factions of the paramilitary Hashd al-Shaabi or Popular Mobilisation Forces (PMF) known to be aligned with Iran.

It is the Iranian leadership, and more especially General Qasem Soleimani, the commander of Revolutionary Guard’s al-Quds force and supremo of Iranian regional policy, who is orchestrating the campaign to smash the protests by sustained use of violence.

Precisely why General Qasem Soleimani decided to do so is a mystery, since the initial demonstration in Tahrir Square on 1 October was small.

The NGOs organising it had been failing for months to generate momentum.

It was the unprecedented “shoot-to-kill” policy of the authorities that turned these ill-attended rallies into a mass movement not far from a general uprising.

During the first days of the protests, protest organisers told The Independent theywere at first baffled by what had happened, inclining at first to believe that the the first day’s violence, when at least 10 people were killed, might be a one-off overreaction that would not be repeated.

But the killing of protesters, counter-productive though it might be, went on.

On the day after the first shootings, bands of young protesters, looking very unintimidated, could be seen milling about the area. The authorities escalated the crisis further by declaring a 24-hour curfew and closing down the internet, a collective punishment of all 7 million people in Baghdad that could only spread support for the demonstrators.

At the same time, paramilitary groups, open in their loyalty to Iran, sent their black-clad militants into television stations publicising the protests to wreck their equipment and studios. They assaulted injured demonstrators in hospitals and abducted and threatened journalists, doctors and anybody else backing the demonstrations.

It is unlikely that this was a pre-arranged plot by the pro-Iranian paramilitaries acting on their own initiative.

It is unlikely that this was a pre-arranged plot by the pro-Iranian paramilitaries acting on their own initiative.

Several of their leaders, whose groups were subsequently known to have supplied snipers to shoot at the street protests, were interviewed by The Independent a few days earlier.

Though they later declared that they had long detected a deep-laid conspiracy by the US, Israel, Saudi Arabia and the UAE to use the protests to overthrow the political system in Iraq, they did not say so at the time. Qais al-Khazali, the leader of Asaib Ahl al-Haq, a powerful paramilitary faction, said that “Iran wants a solution [in the US-Iran confrontation] but it cannot say this itself.”

He downplayed the idea that a US-Iran war was on the cards.

Abu Ala al-Walai, the head of Kataib Sayyid al-Shuhada, said in a separate interview that what most concerned him was an Israeli drone attack on a weapons depot at one of his bases on the outskirts of Baghdad.

Nevertheless, the speed and cohesion with which these pro-Iranian Shia paramilitary groups reacted – or overreacted – to the protests suggests a detailed contingency plan.

“The Iranians always have a plan,” notes one Iraqi commentator.

Nor did the paramilitaries act alone: no distinct boundary line divides the PMF from state security institutions. The PMF may number about 85,000, are paid their salaries by the Iraqi government and the chairman of the PMF is Faleh al-Fayyad, the government’s national security adviser.

The Interior Minister always belongs to the Iran-supported Badr Organisation and the ministry’s Emergency Response Division, for instance, is reported to have provided snipers to shoot protesters.

In the weeks since the first peaceful march was met with extreme violence, the intensity of the repression has escalated in Baghdad and across southern Iraq.

In the Shia holy city of Karbala on one day, snipers killed 18 people and survivors were detained by pop-up checkpoints as they fled through the alleyways.

Kidnapping, disappearances, intimidation – a whole apparatus of repression – has been put in place and is unlikely to be dismantled.

Critics of the status quo, like the populist nationalist cleric Muqtada al-Sadr, whose coalition is the largest grouping in parliament, have fallen silent.

Grand Ayatollah Ali al-Sistani called last Friday for the security forces to refrain from using “excessive force”, but there is no sign of this having any impact.

Adel Abdul Mahdi, the Iraqi prime minister for the last year, has come out of the crisis looking ineffectual.

The Iraqi political class as a whole have evidently decided that they must stamp out the protests to preserve their interests.

The Iraqi political class as a whole have evidently decided that they must stamp out the protests to preserve their interests.

The protesters in the streets – the radicalism of whose demands and the their vagueness about how they might be achieved resembles French students during the 1968 events  in France – are not able to say what they would put in place of the present corrupt and dysfunctional government. As for those carrying out the repression, they are so steeped in blood that it will be impossible for them to reverse course, not that they show any sign of wanting to do so.

Posted on The Independent and ZCommunications November 14, 2019