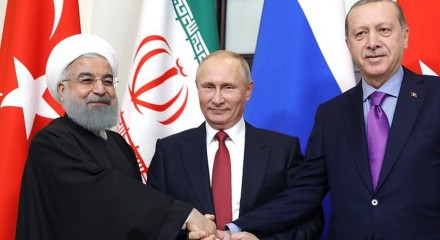 The forces of Bashar al-Assad and his allies, Iran and Russia, are poised to strike deep into Syria’s Idlib province – the principal remaining area controlled by the jihadi Islamists, supported by their allies in the Gulf region through Turkey.

The last-ditch efforts to stop or delay the attack seem to have been thwarted. However, the balance of power between the major players, which have been attempting to redistribute between themselves their zone of influence in the region, may still delay, blunt or limit the attack.

The Astana peace process, which brought Russia, Iran and Turkey together as strange bedfellows, has apparently run its course, and after the last Tehran summit, where the deliberations were broadcast live to a startled world without consulting the participants, seems to have no further practical role.

Turkey has been shedding crocodile tears on behalf of the civilians of Idlib province, but its call for the suspension of all armed actions has fallen on deaf ears – Russia and Iran are both spoiling for a fight with the jihadists. And for Russia’s special envoy, Alexander Lavrentiev, “It is up to Turkey to separate Islamist militants from the moderate opposition.”

So, having done that, it would be Turkey’s task to deal accordingly with the two factions. If the terrorist jihadists were eliminated, the armed opposition would be converted into a “moderate” Sunni opposition working within the confines of Assad’s new set-up.

A meeting of the UN security council, which was summoned after the failure of the Tehran summit, also failed to come up with anything practical – apart from reiterating the US and European position of promising to respond forcefully if any chemical weapons are employed.

On September 4 the Russian airforce resumed its air strikes in Idlib. The deployment of troops along the demarcation line indicated that it was poised for a ground offensive. And after the Tehran summit the strike rate increased.

Russian ground attacks seem to have been proceeding along the M4 road connecting Latakia, the principal port on the Mediterranean coast, to Aleppo on an axis from south-east to north-west, and along the M5, travelling north from Hama to Aleppo. The M4 joins the M5 at Saraqib just south-east of Idlib city.

There are a myriad of side roads and dirt tracks criss-crossing the area, but those two routes are key to controlling the countryside to the south and east of Idlib. Therefore the preliminary targets of the coming attack seem to be the towns of Jisr al-Shugur on the M4 and Khan Shaykhun on the M5. The first wave of air strikes will probably be concentrated on those areas.

There are also two ‘Turkish observation posts’ on those routes. One of them is near Jisr al-Shugur and the other is at Morek on the M5, just after the demarcation line. They are among twelve established following the Astana process. While Syrian forces and their allies were mopping up pockets of resistance to the south, and Turkish forces were invading Afrin, the Idlib area was left in peace for a while – the observation posts on all three sides were established to maintain the truce. There are about 1,200 Turkish troops stationed at the 12 posts.

While the European press describes Idlib as the “last stronghold” of the jihadi Islamists, to the north the regions of Afrin, al-Bab, Jarablus and Azaz are controlled by the Turkish armed forces. In those regions there are about 35,000 opposition troops – restructured by Turkey as the ‘Syrian National Army’. At present they are protected by Turkish air cover. But these are the so-called ‘moderate Islamists’ – much more acceptable than the die-hard jihadists.

The Hay’at Tahrir al-Sham (HTS – Levant Liberation Committee), which has overall control in Idlib, was dominated by al-Nusra, an offshoot of Al Qa’eda. It has a force of about 20,000 foot soldiers. The Astana process put pressure on Turkey to persuade the HTS to dissolve itself into the National Liberation Front, and allow its soldiers to be enlisted into the Syrian National Army under Turkish control. The initial moves failed to bring about the desired solution, so Turkey formally declared the HTS a terrorist organisation.

By doing so it was trying to divide the HTS and bring at least some sections of it under Turkish control. However, the main bulk was unimpressed by Turkish machinations and declared their willingness to fight to the bitter end.

A video circulating on social media shows a jihadi standing near the notorious border wall between Turkey and Syria, next to the entrance to a tunnel running under it. He shouts: “If Turkey sells Idlib out, we will be in Reyhanlı [a border town in Turkey, which was the scene of a car bomb that caused severe loss of life a couple of years ago] in 20 minutes, and in Ankara in a couple of days!” The message was heard loud and clear by Turkey’s native Islamists, including those in government.

While Turkey has played on the European fear of a new wave of immigration, the threat of an uncontrolled flow of Islamist jihadists into Turkey itself threatens its own stability, as it could disrupt relations between the military and security bureaucracy and the AKP government – the principal players forced to find a modus operandi to keep the rebellious Kurds down.

At present Turkish efforts under the Astana process seem to involve negotiating a limit on the military actions of the Assad regime by persuading the jihadists to cede control of the countryside south of Idlib town, while continuing to operate in Idlib and the area to its north under their control. Even though it seems far-fetched at present, that proposal may provide an interim solution that could allow some breathing space for both sides before a possible showdown.

Despites all its posturing, the regime and its allies are not quite in the position of strength they claim. They too may be looking for an alternative to an onslaught on Idlib that may provoke pro-US forces in the region to act. Would Russia risk a major escalation of its conflict with the US? Such an escalation could be very costly – just about every European power would fall in behind the US, while Israel is lurking in the corner, blatantly provoking such an outcome.

The US has indicated its intention to remain in the region for the foreseeable future. While Idlib is preparing itself for an assault, the US and its ally, the Syrian Democratic Forces, have started a joint operation aimed at defeating pro-Islamic State forces in their pocket on the eastern bank of the Euphrates at Hajin town near the Iraqi border. Previously there were only special forces units in the region, but now the US Marines are deployed there for the first time.

They recently carried out a military exercise from their al-Tanf base near where the borders of Syria, Iraq and Jordan join. This followed an incursion of Russian forces under the pretext of a hot pursuit of terrorists. The US has carried out joint patrols with Turkish troops in the Mumbij area on the western banks of the Euphrates, while ensuring that the Turks are kept out of Mumbij town. The US is poised to capitalise on any collapse of the Astana process, and is playing cat and mouse with Turkey. The position of the Kurds within the new Syrian set-up after the armed conflict ends is one of its bargaining chips.

If the Kurds find a resolution to their grievances within the new Syria, the evacuation of the Turkish-occupied zones would be the next step. Turkey would be more and more isolated and would be left without an alternative, since Russia and Iran would be calling the shots in the new Syria, while Kurdish-controlled zones would provide the US with a pretext for staying long term in the region.

So the dream of Turkey’s Justice and Development Party leaders at the beginning of the Syrian conflict of performing Friday prayers in the Umayad Mosque of Damascus would be shattered, and all the territorial gains would be lost. The rapprochement with the Gulf states would end in tears, and all relations built up with the jihadists would turn into dust. So Turkey is desperate to keep the conflict alive without turning it into a full-scale shooting war.

In the cauldron of Idlib there are around three million civilians, but they are the least of anyone’s worries. Things are boiling up under the benign gaze of the US, thanks to the actions of the Russians, Iranians, the merciless Syrian army and die-hard jihadists from all over the Islamist world. These range from a strong contingent of Turkic Uyghurs, forces of the Turkistan Islamic Party and the Uzbeki Katibat Imam al Bukhari, as well as those of various Arab groups. The cauldron of Idlib is nearing boiling point and Shakespeare reminded us in Macbeth what ingredients are needed to cause it to boil over: not just the “liver of blaspheming Jew”, but the “nose of Turk and Tartar’s lips” …