In Afghanistan, We Have Three Dreams 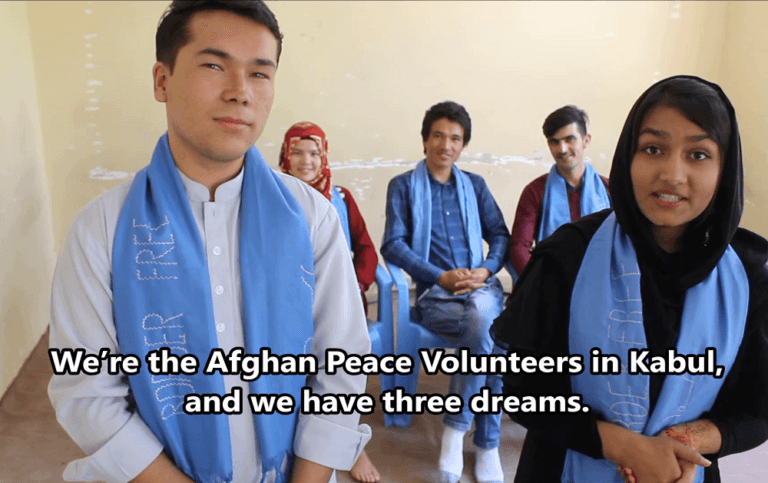 Some of us have wondered, “Are people today too disconnected and frantic to calm down, in order to solve global challenges together? Are we so polarized and self-absorbed that we cannot stop judging one another or insisting on our partisan ways?”

In Kabul, our thoughts and feelings are diverse, complicated and flawed, so we centre our three dreams on relationships.

We have felt much joy in creating this video-letter. We dedicate it to planet earth and to everyone in the human family.

We hope that each of us can take tiny actions to free ourselves from the ravages of money and power.

With love from Afghanistan,

In Afghanistan, We Have Three Dreams Video

We’re the Afghan Peace Volunteers in Kabul, and we have three dreams.

Our three dreams are about reuniting with nature and 7.7 billion other human beings!

What we hope to gain is love, not money or political power, because love will be good for all of us!

We will re-boot the operating systems that have programmed us to chase after fake money and power.

After years of rote exams, we have hardly learned anything about becoming finer human beings. So, we have resolved to educate ourselves to question everything, and to love everyone!

We’re like children whose instinct is to become friends. More than being dreamers, we’re do-ers. So, we’re building three earth GENeration dreams, GEN for Green, Equal and Nonviolent.

We dream of Green earth relationships!

We practise permaculture and use solar energy.

Why? We’re part of nature and can’t survive without her. Our Mother Earth isn’t a “thing” for us to utilize or set on fire, but a “being” for us to embrace.

We dream of Equal earth relationships!

We have started worker cooperatives because the world economy isn’t fair for the planet or for 99% of humanity.

Our community is self-governing. We don’t need a Director. All of us are leaders, but we’re not like today’s cash-elected leaders who’re some of the least desirable humans in the world.

We’re growing our web of Borderfree friends, because we’re from the same human family, the same tree of life. We want to be friends with all Afghans, US citizens, Russians, the British, Chinese, Koreans, Pakistanis, Indians, Iranians, Sudanese, Venezuelans and every human being!

Our human genome is 99.9% similar, so we reject racism, exceptionalism, male superiority, moralism and others, because all of these are neither scientific nor kind.

We dream of Nonviolent earth relationships!

We all want peace, but so far, we’ve wanted peace only for our own countries, tribes, political and religious groups. So war has continued, and as a result, I’ve lost my uncle Sakhi, and my close friend Tariq.

We’ve more space in our hearts for love and peace than for war, so we’re training ourselves to be nonviolent mediators. We’ll reason and empathize with our leaders and extremists, and we will reach an agreement without using any physical force!

War starts in our militarized minds, so picture the global war on terror as a smart phone. We think it’s necessary and that it works well. But really?

Some people think that, like a phone, war is necessary, But though war may work, it only works physically for a short while, and only works for a few individuals.

For the rest of us, war costs us everything! It’s time to throw it away!

Killing one another unsettles our human psyche. So, to those who have divided us with trauma, distrust, sorrow and revenge, we say, “We’re breaking free!”

Well, these three dreams are really one dream, because we can’t fix the climate, without fixing inequality or war.

Everyone and everything is related! We just can’t separate ourselves from each other, from the earth, or from you!

Okay, thanks for listening to our dreams. We’ve taken up enough of your screen time. So let’s get off screen, terminate our business as-as-usual, and pursue the authentic relationships all of us long for.

Remember, we make up 64% of the Afghan population below 25. We’re the new Earth GENeration. We’re the music and the movements within you, so we hope to meet you someday!