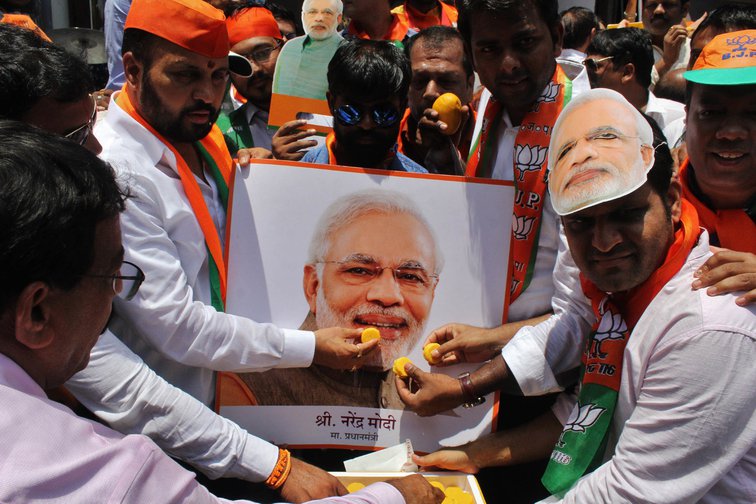 The people accepted electoral authoritarianism for their security. This neutralised warnings by intellectuals and opposition parties that Modi’s India was heading towards fascism.

Narendra Modi’s stunning victory in the parliamentary elections speaks volumes about the transformed India and an India keen to be transformed further. He defied the incumbency handicap to be crowned as India’s Prime Minister for a second term. He got the most impressive mandate despite his Government’s dismal economic record, his unkept promises, mendacity, an unprecedented rise in bigotry and sustained low-level communal violence during the past five years.

Elections are not won or lost because of one single factor. However, what mattered most to the voters and why they felt so enamoured of Modi became somewhat obvious. A more authentic assessment may be made by Donald Trump’s election strategist. The rise of the two leaders calls for a composite study. The two have learned a lot from each other. Modi’s achievement is bigger because India’s economy faltered during his regime.

The rise of the two leaders calls for a composite study. The two have learned a lot from each other.

Indian voters had several reasons to do what they did but perhaps most of them looked for and chose a Messiah determined to protect the “endangered” religious majority. Such voters want a devout Hindu to be the Prime Minister. They responded to the BJP’s clarion call: “Declare with pride that we are Hindus!”

From hope to fear

Modi’s poll campaign in 2014 was about hope: this time it was about fear. In an atmosphere of fear, lynch mobs fear the other and the victims fear the perpetrators. There was no angry public response to the acts of commission by the Hindu vigilante groups and acts of omission by the state police. This neutralised warnings by intellectuals and opposition parties that Modi’s India was heading towards Fascism. The people accepted electoral authoritarianism for their security.

Sustained propaganda by Modi and his party created religious polarisation. The fear that “Muslims are coming” led to the consolidation of the Hindu votes. The religious card of the Hindu nationalist party worked wonderfully well this time.

An allied strand of this electoral strategy was the focus on Islamic Pakistan. Once an Indian Muslim terrorist killed para-military troops in Kashmir, the Modi campaign of toxic nationalism took off furiously. The voters were warned that they live in a nation threatened by enemies within and without.

The Modi Government failed to prevent the killing of the para-military personnel in Kashmir by a terrorist. But Modi’s media management ensured that its criticism was not amplified. Such a killing during the Congress regime would have damned that Prime Minister. Modi in the opposition would have gone to town demanding his resignation for the Government’s huge intelligence failure! Modi ordered a surgical strike into Pakistani territory, publicised it on a massive scale, highlighting his nationalistic credentials and macho image. His followers sang praises of the Modi army!

Modi prevented any political harm resulting from his dismal performance on the economic front by distracting the voters’ attention from their economic woes. He harnessed their support for the greater cause of helping him to protect the nation! He avoided any reference to his 2014 promise of “Good Days” that never arrived. No new promise of economic nirvana was made.

Understanding the follies and frailties

Modi presented himself as a devout Hindu seeking to restore the glory of Hinduism by making it muscular and aggressive. Bigotry and toxic nationalism energised the BJP’s election campaign. Millions followed him as they would follow a cult leader. In their eyes Modi could do no wrong. His failures, his divisive sectarian statements, his threats, uncivil remarks and lies only increased his popularity.

The campaign for these elections was launched by Modi immediately after winning the last ones in 2014. A steady flow of communal poison kept dripping into the nation’s veins. The incidents of violence against minorities, rationalists, independent journalists and liberals have been well documented.

The vigilantes marching behind the flag of Hindutva enjoyed considerable freedom while Modi’s critics faced threats and lived in an atmosphere of fear. Writers were the first to protest against the culture of enforced thinking introduced by the Modi regime. The dissenting writers were neutralised by a social media hate campaign. In any case, how many battalions does a writer command?

However, the believers in majoritarianism alone could not have secured a record victory, so Modi wooed different voters with different messages. Some came to him because he appeared competent and efficient. Some believed he could not be corrupt because he does not live with his wife and has no progeny. Modi’s claim that he is a fakir was amplified by his acolytes, notwithstanding his valuable personal possessions and his very expensive and huge wardrobe. Many were persuaded by the repeated assertion that there was no alternative to Modi. Of course, Modi also offered political stability which is valued even by ordinary voters unless they are too dissatisfied by an outgoing regime. Thus, Modi sold himself even to many of those untouched by sectarianism.

Modi came across as a dynamic and charismatic personality. He could mesmerise large audiences with dramatic gestures and sharp and satirical remarks against his opponents. Modi had access to record sums of money. He had the fullest support of the incentive-hungry business leaders ever ready to loosen their purse strings to expand his party’s war chest. There was no level field in these elections.

The ruling party’s muscle power comprised millions of booth-level workers and a vast network of volunteers working selflessly for the RSS, a so-called cultural organisation. Modi commanded a subservient media that amplified the message of hate against his opponents and against a religious minority.

However, for being able to coordinate the strands of a winning strategy the credit goes to the mind of Modi. Some may qualify his genius but he has proved time and again his understanding of the follies and frailties of human beings and of India’s social and religious fault-lines. He used his oratorical skills to exploit these fault-lines. Being a divisive figure, he has taken conflict to every home so politics has come to dominate social life. Modi creates confrontation and prospers.

Since religious polarisation could not fully bridge the caste differences, Modi devised a complex strategy to break up the political dominant castes. He wooed and won sub-castes to neutralise the opposition by that caste formation. With two powerful weapons of envy and resentment, he divided it by accentuating internal economic rivalry. This strategy saved Modi in a couple of states where he was challenged by the caste-based parties. The BJP thus firmed up the sub-caste identities.

Modi had the big advantage of having an incompetent and divided opposition. He went after the enfeebled Congress and its young leader Rahul Gandhi because when it comes to an ideological war, the Congress is the only “enemy”. Most other opposition parties have flirted with Modi’s party in the past. Enshrined in India’s Constitution, secularism was so cherished by the masses that the communal political parties were kept out of power for decades.

Modi’s party relentlessly attacked the secular parties for “appeasing” Muslims. In a society lacking in empathy, this propaganda influenced many Hindus and some of them even started holding the Muslims responsible for their economic misery. The Congress had no effective strategy to counter the onslaught against secularism. Modi derided the secularists and said that their days were numbered in a nation bubbling with Hindu pride. Hinduism scholars never protested against the BJP hijacking their faith for a political project and seeking to distort it. Hindu priests were either co-opted by the BJP or chose to remain silent.

The Congress raised the issue of corruption by alleging that Modi favoured a private Indian company instead of a public sector firm while striking a deal with France for the Raffle aircraft for the Indian Air Force. It did no political harm to Modi even after many reports embarrassing the Government were published by one newspaper. Corruption becomes a big issue if a party is competent to exploit it.

The Congress had miserably failed to publicise the economic achievements of its Manmohan Singh Government. Thus, the voters got convinced by Modi’s assertion that nothing was done in India till 2014. The young impatient and aggressive aspirational class truly believed what Modi said.

In a confrontational election campaign, leaders like Modi have a natural advantage. The days of the gentleman-politician are over. The growing criminalisation of politics is reflected in the profile of the new Parliament. Politics has place only for crafty individuals. Some years ago, Modi could not have called his opponents anti-national Indians. Every critic of Modi is asked to go away to Pakistan. This propaganda stooped to its ugliest level in social media. Even after the Model Code of Conduct came into force and the Election Commission prohibited references to religion and the military in the campaign, the Prime Minister merrily ignored such advice.

India witnessed the ghoulish act of shooting down Gandhi’s cardboard cut-out in a public square by a saffron-clad woman. It was gleefully video-graphed and circulated. The scene had the artificial blood flowing down after the “gunshot” from a toy pistol. Some Hindu nationalists have not forgiven Gandhi for his sin of “appeasing the Muslims”.

The BJP fielded as its parliamentary candidate a terror-accused Hindu nun Sadhvi Pragya who is out on bail. She said she had cursed a police officer who had once investigated her in a Hindu terror case involving the killings of Muslims. This officer later died fighting Muslim terrorists and was widely hailed as a martyr. Sadhvi Pragya also applauded as a patriot the right-wing Hindu killer of Gandhi, Nathuram Godse. She won by an impressive margin and will now speak in Parliament on the India of her dreams.

Sadhvi Pragya also applauded as a patriot the right-wing Hindu killer of Gandhi, Nathuram Godse. She won by an impressive margin and will now speak in Parliament on the India of her dreams.

Modi’s mentor organisation RSS has the declared objective of establishing a Hindu nation. Its political wing, the BJP, proudly calls itself a Hindu nationalist party. Modi has a proven record of consolidating the Hindu voters. As the chief minister of the Gujarat state which witnessed sectarian killings on a massive scale during his rule, he was hailed as Hindu Hriday Samrat (Emperor of the Hindu Hearts). His poll strategy in 2014 demonstrated that the Muslims, notwithstanding their numbers, could be politically marginalised. So, some compulsions of democracy were gone as far as Modi’s party was concerned.

Social media posts and statements by the BJP leaders had prepared the ground to instil the fear of a coming demographic disaster and the infiltration of the “termites” belonging to a different faith creeping into the nation. The BJP chief used the word termites while an official move was made to grant citizenship to all infiltrators barring the Muslims!

Educated Indians can be heard talking of the coming “Islamisation of India”. It is not that an epidemic of bigotry hit India all of a sudden. A large number of Indians, like the people of other nations, had kept such sentiments suppressed for years. In the atmosphere created by a new kind of political leadership, the dam burst.

Reading the election results, one has to say it wasn’t the economy, stupid! Someone from a new breed of BJP intellectuals may write a tome titled It’s the Muslims, stupid. He has a ready template in It’s the Jews, stupid.