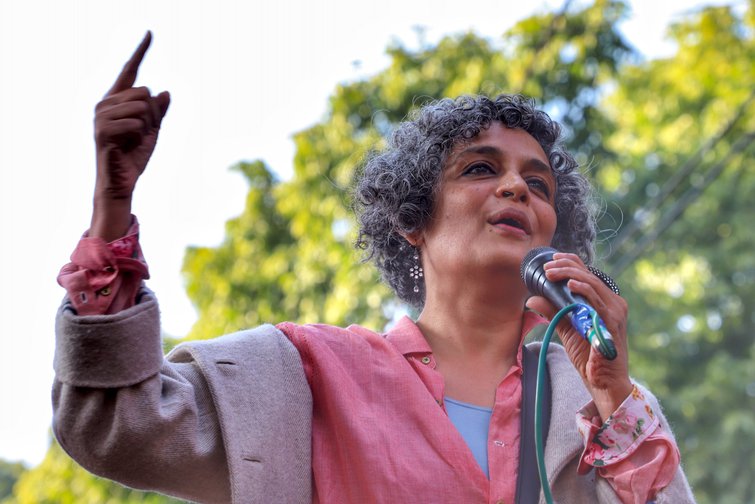 India’s coronavirus lockdown, which began in March, has been one of largest and strictest in the world. It has left tens of millions without work prompting a mass exodus from cities; many have attempted to travel hundreds of miles – on foot, by bicycle or even clinging to trucks – to return to their home villages.

This week, the government has begun loosening restrictions despite the number of reported cases continuing to rise. Although the numbers are relatively low for a population of almost 1.4 billion people, the country is yet to reach its peak.

As the lockdown lifts, we asked the acclaimed writer Arundhati Roy, who has been an outspoken critic of Narendra Modi’s government, what kind of India will emerge from under lockdown.

The Indian government acted fairly quickly to impose a lockdown. Has it worked?

Arundhati Roy: The lockdown has been disastrous. India is the only country where the numbers climbed sharply through the lockdown and just when the graph is the steepest the lockdown has been relaxed. So we have a double disaster. An economic wreckage as well as a raging pandemic. The COVID-19 numbers have been and continue to be, in my opinion a bit unreliable not only in India, but everywhere. In India, for example, we generally count the deaths in hospitals, and who knows how many more have died at home, how many have died of other illnesses that could not be addressed because of this emergency. How many from hunger, or exhaustion on their long march home, in addition to the alarming death rates in India for more usual reasons.

The only thing we know for sure is that both lockdown and social distancing cannot be applicable in India, if we think of the tens of millions living in the slums. Take for example Dharavi, the largest slum in Asia in the heart of Mumbai: almost one million people in two square kilometers, one toilet for several hundred people, what does quarantine or social distancing mean in such conditions?

Instead of testing, monitoring, stopping public gatherings and shutting down, say, restaurants and malls, at a time when there were only a few hundred cases, they brought the hammer down on the whole country. They smashed an economy already in a deep crisis and that is now obviously in a massive recession. Hundreds of millions of jobs have been lost.

The cases are rocketing up, and now number 280,000. As the graph climbs the lockdown has been lifted. Having broken everything, the government has now absolved itself of all responsibility, and is telling us that we have to learn to live with the virus. People who should have been allowed to go home two months ago, are now reaching their villages, carrying the virus with them.

It is only Modi’s hubris, his unchallenged power and his complete lack of understanding of the country he rules that could have resulted in such a mighty disaster. He is cunning, but unintelligent. That is a dangerous combination.

Add to all this, the Modi Government’s overt Islamophobia, amplified by a shameless, irresponsible mainstream media – that overtly blamed Muslims for being spreaders of disease. You have whole TV shows dedicated to “COVID jihad” etc… All this came off the back of the unconstitutional dismantling of Kashmir’s special status (leading to a 10 month on-and-off lockdown and internet seige of 6 million people in the Kashmir valley – a mass human rights violation by any standards), the new anti-Muslim citizenship law, and the pogrom against Muslims in North East Delhi in which the Delhi Police were seen actively participating.

Young Muslims, students and activists are being arrested every day for being “conspirators” in the massacre. While ruling party politicians who actually came out on the streets calling for “traitors” to be shot, remain in positions of power and high visibility.

You have been criticized for an interview that you gave to Deutsche Welle, in which you describe this rampant Islamophobia as something that could be a prelude to genocide. Can you help us to understand the escalation of this situation?

Yes. I said that the language being used by the mainstream media against Muslims was designed to dehumanise them. To paint an entire community as “corona jihadis” during this pandemic, when there is a pre-existing atmosphere of violence against Muslims is to create a genocidal climate.

Over the last couple of years we have had so many instances of mob lynchings and George Floyd-type killings – the difference in India being that Hindu vigilante mobs do the killing and the police, the legal system and the political climate help them to get away with it.

These episodes of violence and massacres against the Muslim minority in India are nothing new. Think of the pogrom that continued for months in 2002 in Gujarat, when Narendra Modi was Chief Minister of that State. Muslims were slaughtered in broad daylight. Modi looked away and has never expressed regret. Quite the contrary. He has ridden to power on that legacy. He and his ministers are members of the Hindu supremacist RSS, the most powerful organisation in India whose founding ideologues were inspired by Mussolini and Italian fascism.

Hindu fascism has vernacular roots too. The caste system – a supposedly divinely ordained system of social hierarchy in which Brahmins consider themselves to be the master race – lays the foundation of fascist attitudes.

But to come to the unfolding of events that set the tone of our lockdown – from the very beginning, immediately after its announcement at the end of March, the media spread the news of several cases of contagion in Nizamuddin, an area right in the center of Delhi not far from where I live, that only a few weeks before had hosted a large conference organised by an Islamic congregation called Tablighi Jamaat, with numerous delegates from abroad. Immediately the hashtag #CoronaJihad started to circulate on Twitter. Tablighis were branded “human bombs”. Muslims were being denied admission to hospitals and local BJP leaders and politicians were calling for Muslim fruit and vegetable sellers to be boycotted.

It was terrifyingly similar to how, during the rise of the Third Reich, Nazis began accusing Jews of being spreaders of disease, carriers of typhus. And the tone of the media – particularly channels like Zee TV and Republic TV began to sound like Radio Rwanda. These channels are specially rewarded by the Modi coterie, granted exclusive interviews by him and his terrifying home minister. The horror show is ongoing.

Muslims are being dehumanized, ostracised economically as well as socially – if you read scholars of genocide like Robert Jay Lifton, they tell you that this is the first step, the way it all begins.

And yet, in the months preceding the lockdown, a protest movement was growing in opposition to the government’s Citizenship Amendment Bill that was passed in December. How do you explain such a rapid deterioration of the situation?

Yes. A few months ago those protests were a little like what is happening in the US right now. The protests were non-sectarian. Poetic and beautiful. As soon as the Citizenship Amendment Bill in December, students rose in protest. They were put down brutally by the police. Police entered campuses, smashed up a library, and used weapons on students that would normally be used in anti-terrorist operations. This enraged the younger generation. There were massive protests all over India.

In Delhi, in the Shaheen Bagh neighborhood, thousands of women gathered to block a city road. They sat there for almost three months. Shaheen Bagh became the site of collective creativity, poetry readings, music concerts. It was mirrored in other cities like Mumbai, Bengaluru and Kolkata. When the Delhi state election campaign began, Modi and his party painted these women as terrorists, as Pakistanis – it was the most vicious campaign you could imagine. But they lost. The AAP (Common Man’s Party) won 62 seats out of 70. Soon after that defeat, the anti-Muslim pogrom began in North East Delhi.

President Trump was visiting Delhi while the massacres and the fires raged. He pretended it wasn’t happening and instead showered Modi with praise. Fifty five people were killed. It made big news in the US, which enraged the BJP. So now while we are all locked down, there is a massive round of arrests. Young students are in jail, being made to pay the price for a massacre openly instigated by BJP politicians.

The last weeks of this Indian lockdown have been particularly dramatic. A gas leak at a chemical plant in southern India resulted in 11 deaths and made hundreds ill; sixteen migrants died in their sleep under a freight train; and a cyclone has killed more than 80 people. What kind of India will emerge from lockdown?

As with the human body, this virus had the effect of making visible and accelerating the collapse at the social scale. All the diseases – comorbidities of a deeply unjust society – have exploded into view. It will be a deeply wounded India, even more divided by inequalities: the lockdown has not only meant the undoing of the economy, but has also caused the disappearance of a huge labor force that was being cruelly exploited and paid barely subsistence wages.

It’s ironic that despite the horrifying sight of the exodus – the reverse migration of that working class that showed how fragile it is, how vulnerable, how impoverished – we have the corporate class asking for a further dismantling of labour protection laws (which in any case apply to a very small section of the working class) to enable India to compete with China as a manufacturing hub. It’s not easy to foresee the consequences. If before the lockdown we had the worst unemployment rate in 40 years, I can’t imagine what will happen now, with an entire subcontinent in distress. We run the risk of mass hunger, even though warehouses are stocked with millions of tonnes of foodgrain.

Injustice was hidden away, by the media, by Bollywood, by a literary and cultural community who considered it the acceptable price for becoming a superpower

The only consolation is that this mosaic of emergencies is out in the open: those who had the privilege of confining themselves at home, could not help but see the magnitude of the disaster, the horrifying injustice and shame of being part of a society like this. It was hidden away, by the media, by Bollywood, by a literary and cultural community who considered it the acceptable price for becoming a superpower. What may happen in the coming weeks and months, depends on each of us, not only in India but everywhere: will we fall back on the same tracks, or fight for change?

Yes, because what has been done to the people is in my view a crime against humanity. In order to know the full contours of it, we need facts we can trust. On the health front, the economic front, the role of the media – all of it. The documentation, the gathering of evidence and testimonials will in itself be a revolutionary act.

Part of this interview was originally published by Il Manifesto in Italian.