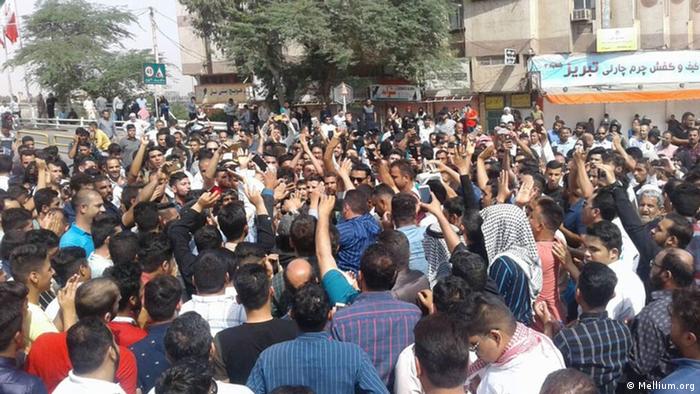 Iran is using unlawful and excessive force in a crackdown against protests over water shortages in its oil-rich but arid southwestern Khuzestan province, international rights groups have said.

At least eight protesters and bystanders, including a teenage boy, were killed when authorities used live ammunition to quell the protests, Amnesty International said on Friday.

“Iran’s security forces have deployed unlawful force, including by firing live ammunition and birdshot, to crush mostly peaceful protests,” the rights group said in a statement.

Iranian media and officials said at least three people were killed, including a police officer and a protester, accusing “opportunists” and “rioters” of shooting at protesters and security forces.

Over the past week, Iran has been rocked by demonstrations, mainly in southwestern Khuzestan, the country’s main oil-producing region.

The area has been struggling with an intense drought since March. The province is home to a large Arab minority, and its people complain frequently of being marginalised by authorities.

Initially sparked by a lack of access to water services, some of the protests have seen anti-government slogans and calls for the overthrow of the Islamic Republic itself.

In response, security forces have used automatic weapons, shotguns and tear gas in an attempt to disperse demonstrators.

In a statement, Diana Eltahawy, Amnesty’s deputy director for the Middle East and North Africa, said using live ammunition against demonstrators who posed no immediate threat to the security forces constituted a “horrifying violation of the authorities’ obligation to protect human life”.

In 2019, rights groups accused Tehran of launching a ferocious crackdown against nationwide protests over fuel price rises. According to Amnesty, at least 304 people were killed.

Domestic media has downplayed the violence, however, attributing a number of deaths to attacks by protesters, who they have referred to as “rioters”.

Iranian authorities have gone further to blame the unrest on rioters, Amnesty noted.

Iran’s supreme leader, Ayatollah Ali Khamenei, said on Friday that he understood protesters’ anger over the drought in the country’s south-west.

“People showed their discontent, but we cannot have any complaint since the issue of water in the hot climate of Khuzestan is not a minor issue,” Khamenei was quoted as saying by state television. It was his first direct comment on the protests since they began a week ago.

He also accused Iran’s enemies of trying to exploit the situation, warning that the “enemy will try to use any tool against the revolution, the nation and the people’s interests, so we must be careful not to give him any pretext”.