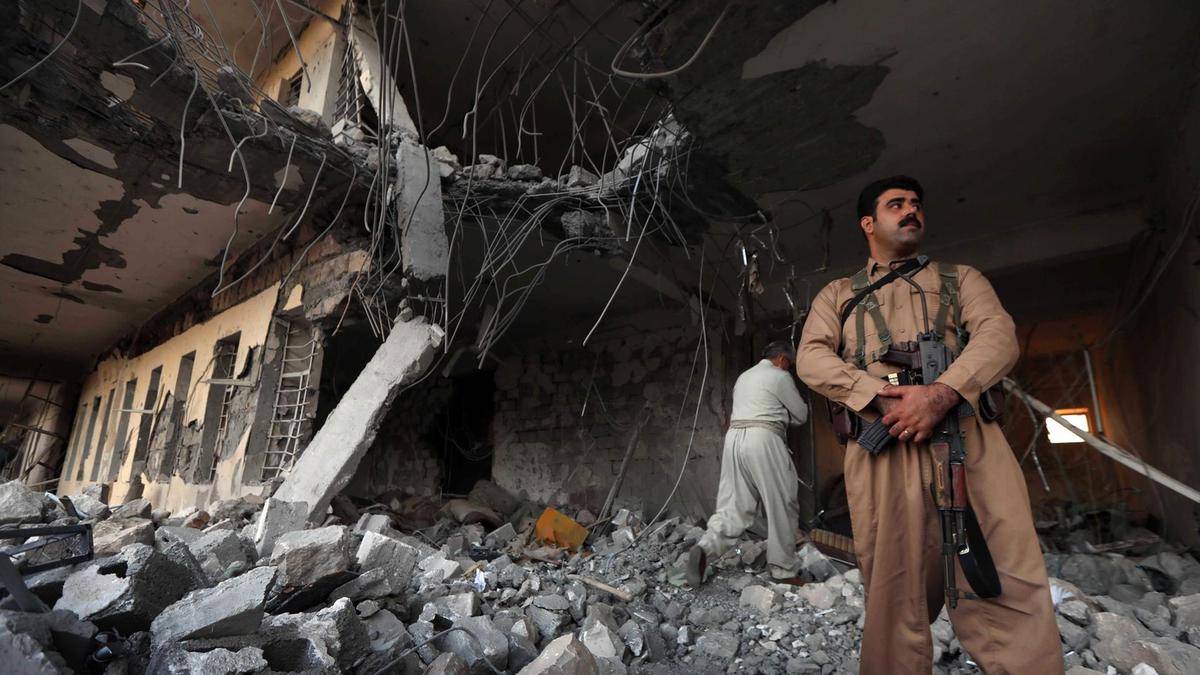 The patience of Iran’s Islamic Revolutionary Guards Corps (IRGC) with Iranian Kurdish groups operating from northern Iraq was wearing thin. Spiraling violence in western Iran between Iranian Kurdish fighters and security forces had been claiming an increasing number of lives. Meanwhile, Iraqi Kurdish authorities were doing little to reign in the groups based on their territory. Simultaneously faced with escalating pressure from the United States, Tehran likely felt that something had to be done, that a message had to be sent. The apparent response was multi-pronged.

On Sept. 7, IRGC drones surveilled a six-member unit of the Kurdistan Free Life Party (PJAK) in the mountains of western Iran. The fighters were surrounded by Iranian forces on a mountain near the village of Palangan. PJAK sources believe at least three of the fighters were eventually killed. There has been no information about the others.

At dawn the following day, three Iranian Kurdish political prisoners were paraded in a prison near Tehran before being sent to the gallows. Meanwhile, Iran had deployed seven missile batteries near Azarshahr, in East Azerbaijan province, opposite a fort across the border in Iraqi Kurdistan.

When the missiles were launched, a group of senior officials of the opposition Iranian Kurdistan Democratic Party (PDK) had gathered for an important meeting at its Iraqi headquarters, a sprawling fort built by the Russians in 1977 for President Saddam Hussein’s army. PDK and fellow Kurdish opposition groups were on alert, as assassinations of their members had risen this year after Iran implemented a campaign targeting the border area where the parties are based.

In a July 26 letter, written by several Kurdish opposition parties to foreign missions in Iraqi Kurdistan, including the US Consulate, the groups had warned about possible attacks in Iraqi Kurdistan. “Now that the voices of discontent and protest are increasing in Iran, the Iranian regime is attempting to divert attention from its domestic crises in an effort to manipulate public opinion,” the authors stated. The letter was shared with Al-Monitor by the representative of the Kurdistan Democratic Party of Iran (KDPI) in Sulaimaniyah.

Iran’s main target in the region is the KDPI, which resumed armed operations in early 2015 after a hiatus of more than a decade. When US President Donald Trump’s tone against Iran grew more bellicose this year, the group intensified its attacks. In response, the IRGC, in particular Quds Force Commander Qasem Soleimani, warned Iraqi Kurdish officials to reign in the groups.

In part due to contentious internal Iraqi Kurdish politics, however, the KDPI has continued its operations inside Iran and has introduced “urban peshmerga,” indicating that it intends to take the battle not just to the border, but deeper into Iran. Meanwhile, its sister party, the PDK, which split from the KDPI in 2007, has held at least three rounds of negotiations with Iranian representatives, with its leaders repeatedly stating that armed resistance is not the answer to the Kurdish question in Iran. Meanwhile, in recent months, the Protectors of Eastern Kurdistan, a front group for the PDK, has launched at least three deadly attacks on Iranian security forces.

Al-Monitor has learned from a source close to Iran that Soleimani had asked Iraqi Kurdish officials three times this year to reign in the KDPI. In response, Iraqi Kurdish officials met with KDPI and PDK officials, but without reaching any satisfactory arrangements. In the meantime, the KDPI continued its attacks on Iranian forces in Iran. The source also divulged to Al-Monitor that the IRGC had thoroughly planned the Sept. 8 attack, going so far as to consult the Russians who had built the fort in Koya about the structure and strength of its materials to gauge how much explosives were needed in the warheads that would target the meeting.

Al-Monitor visited Nezarke Fort, a structure in Duhok identical to the one in Koya, which has more than 150 rooms and four large turrets. That the IRGC missile hit the room where the meeting of the PDK was reportedly taking place is a testament to the level of the Iranians’ intelligence gathering. Indeed, a video released by the IRGC shows two of the missiles striking their target, reportedly killing at least 15 people, including several senior officials of the PDK and wounding more than 40 others. A KDPI spokesman told Al-Monitor that 13 PDK members had been killed, and two members of the KDPI died when one of the missiles hit their training field, a few hundred meters from the fort.

Nonetheless, having been ridiculed for suboptimal missile attacks on Islamic State (IS) bases in northeast Syria last summer in response to IS attacks in Tehran, the Iranians seem to have done their homework this time. Indeed, Iranian agents appear to have monitored the bases of the Kurdish groups from the Haybat Sultan range, overlooking Koya, and bases south of the town.

Iran has not stopped at the missile strike. It has now deployed troops to the border area and is demanding that Iraqi Kurdish authorities either hand over Iranian Kurdish fighters or expel them. Rather than triggering infighting, the Sept. 8 attack appears to have brought the usually bickering Kurdish opposition groups together, as they now want to coordinate their efforts against Tehran. This is even though the KDPI has said it will continue armed operations, while PDK official Khaled Azizi reiterated on Sept. 10 that armed resistance is not the solution.

It is almost certain that tensions between Iran and Iranian Kurdish groups will only increase. The United States condemned the Sept. 8 attack, calling it “an effort to threaten and destabilize its closest neighbor,” while Kurdish groups are trying to publicize their cause and have called on the Trump administration to take concrete measures against Tehran.

“We are waiting to see the next shift in the Trump administration,” PDK spokesman Aso Hassanzadeh said at a Sept. 12 press conference in Erbil. “We have seen a lot of words, not actions. … We are still a little bit worried that it’s only about limiting Iran’s actions in the region. With this nothing will be resolved.”

Meanwhile, IRGC commander Mohammad Ali Jafari warned on Sept. 13, “[The] IRGC’s recent revenge against the terrorists conveys a highly meaningful message to the enemies, particularly those superpowers who think they can impose their evil plots on us and bully us.”

It is clear that Iranian military commanders are uneasy about Iran’s western border. More than ever, the danger of rapid escalation looms, particularly as localized fighting between Kurdish groups and the IRGC could get sucked into the broader confrontation between Washington and Tehran. Thus, as the Iranians warn that Kurdish groups should expect further attacks if they fail to halt their operations, not only civilian residents in the border area between Iran and Iraqi Kurdistan are in peril, but perhaps even more so is the Kurdistan Regional Government, which now has to maneuver between Iran, the United States and the PDK and KDPI without getting entangled in their conflicts.

Only time will tell how and whether the leaders in Erbil and Sulaimaniya will be able to deftly address the situation without becoming the victim of extraneous conflicts.

Fazel Hawramy is an independent journalist currently based in Iraqi Kurdistan.