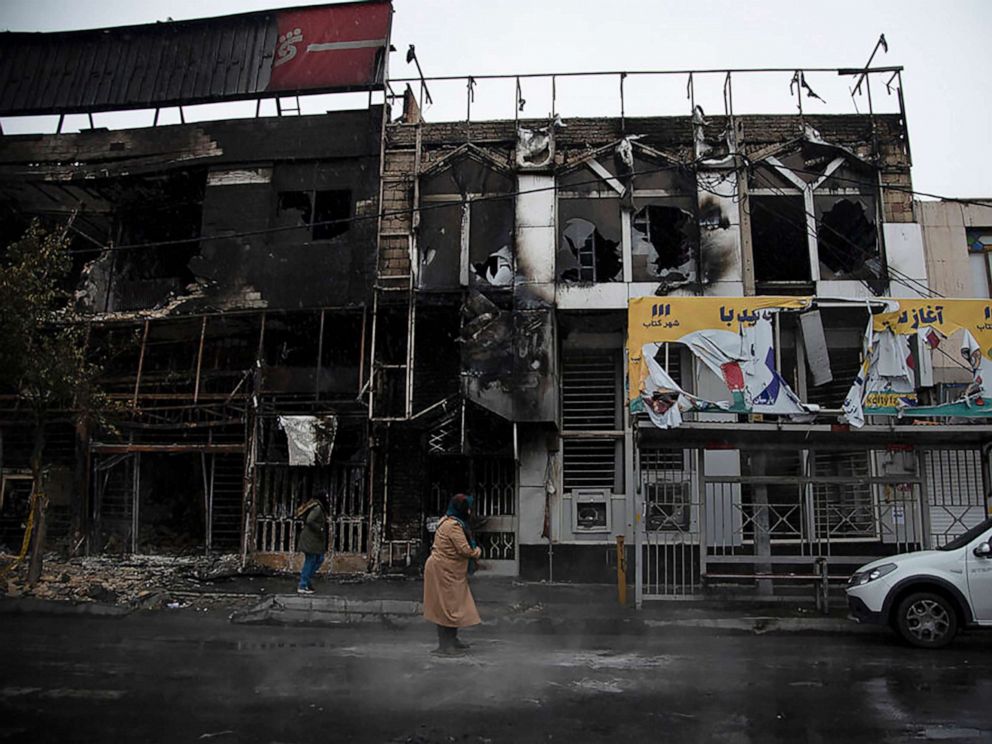 Police stations, banks, some public buildings,  a few religious seminaries and  many posters of Supreme Leader Ayatollah Ali Khamenei have been set on fire.  Demonstrators have blocked roads.  Slogans include:  “Gasoline is becoming more expensive and the poor are becoming poorer.”   “Khamenei is a murderer.  His rule has expired.”   “Death to the Dictator.”   “Death to this Demagogic Government.”  Even some members of the parliament have resigned in protest.

It took the  popular uprisings in Iraq and Lebanon following  the earlier uprisings in Sudan and Algeria this year for the Iranian masses,  especially unemployed and student youth to gain the courage to go out into the streets in large numbers again and for the first time since the December 2017-January 2018  uprising,  call for an end to the Islamic Republic.

What set off the nationwide protests was a 300% increase in the price of gasoline announced suddenly on Friday November 15.  That is a huge increase for the majority of   Iranians who have already sunk to extreme poverty levels because of the cost of Iran’s military and political interventions in the region,  its nuclear and missile development programs,  and the severe sanctions imposed by the United States.

Since Friday, tens of thousands have been protesting in 22 of Iran’s 31 provinces throughout the country and representing 100 cities as well as some rural areas.  Anti-riot police and security forces have been battling the protesters.   According to Amnesty International,  more than a hundred have been killed by the government.   Hundreds have been injured and over one thousand arrested.   Government sharpshooters have been standing at rooftops and shooting at demonstrators directly in the head.  Military helicopters are also being used to shoot demonstrators.

Police stations, banks, some public buildings,  a few religious seminaries and  many posters of Supreme Leader Ayatollah Ali Khamenei have been set on fire.  Demonstrators have blocked roads.  Slogans include:  “Gasoline is becoming more expensive and the poor are becoming poorer.”   “Khamenei is a murderer.  His rule has expired.”   “Death to the Dictator.”   “Death to this Demagogic Government.”  Even some members of the parliament have resigned in protest.

Protests began in the city of Ahvaz in Khuzestan province where  last week,  protests had taken place after the death of a popular dissident poet,  Hassan Heydari  who had just been released after his arrest.   Khuzestan which is an oil producing province with a large population of ethnic Arabs,  has been a center of labor struggles and a victim of massive environmental problems related to pollution from oil production, drought and floods caused by dam building.   The ethnic Arab population of Khuzestan has also protested against discrimination and the summary executions of several civil society activists and writers last year.

The latest reports from Khuzestan state that  “the Iranian regime had targeted unarmed protesters in the cities of Koura, known as Chamarn in Farsi, and Jarahi, known as Shahrak-e Mamku in Farsi, in the Ahwaz region. Regime forces used heavy machine guns against unarmed protesters and have besieged both cities with tanks, killing at least 20 Ahwazi protesters, including women, all of whom were unarmed civilians.  In this bloodbath, fierce clashes have been taking place in the Tanida neighbourhood in Jarahi city,  between unarmed protesters armed only with sticks and rocks and the heavily armed military personnel of the regime’s Islamic Revolutionary Guards Corps (IRGC), assisted by plainclothes Basiji thugs and Iraqi militiamen from the Popular Mobilisation Units or Hashd al Shaabi, who are all also heavily armed by the regime with machine guns and otherweapons.” (https://www.dusc.org/en/article/4944?fbclid=IwAR3rYELR1gz0Zc_g8pMyeadaN68UlxOsdsTgXzuBCwRZUQ9tVne_ulz_B94)

Some of the other intense protests have taken place in Shiraz  and Kermanshah,  a mainly Kurdish province.   Parts of Kermanshah were damaged  by an earthquake in November 2017 from which they have not yet recovered because of little reconstruction  and other aid from  the government.  Earthquake victims still live in tents.

In face of all these protests,  Khamenei has announced that the people must tighten their belts and accept the gasoline price rise.  He has denounced the protesters as “evil thugs” instigated by foreigners.   The government has cut off the internet which makes it nearly impossible to get reports from inside Iran.     Iranian socialist journalist, labor and women’s rights activist,  Sepideh Gholian who was recently released temporarily after posting heavy bail, has been rearrested.  Saha Mortezai,  an Iranian woman PhD student in political science has been rearrested along with other students.

Security forces are currently assaulting student demonstrators on the campus of Tehran University.   The university gates have been closed to keep  students inside to facilitate the attacks against them.    In some areas of Tehran and other cities however,  protesters have been able to take over control of their areas away from the police and security forces.

Labor protests and actions have been frequent in Iran during the past two years and have led to workers, teachers and labor activists being arrested and often released temporarily on heavy bails.  It remains to be seen whether labor protests which so far have focused on demanding unpaid wages and opposing “privatization” of state-owned companies would move toward calling for a general strike and directly challenging the state.

Expressions of solidarity from Iranians  with  the popular and mostly youthful  protests in the region and around the world are very much needed.     Both in Iraq and in Lebanon,  protesters have demanded an end to their corrupt authoritarian sectarian governments which are either greatly influenced by Iran through Hezbollah in Lebanon or directly controlled by Iran through the Islamic Revolutionary Guard Corps (IRGC) and Shi’a militia groups that dominate the government of Iraq.    A  report just published by the New York Times,  based on leaked documents about Iran’s involvement in the Iraqi government,  shows the extent to which Qassem Soleimani of the IRGC gives orders in Iraq.  It  reveals the extent to which Iran and its Shi’a militia are involved in determining the leaders and direction of the Iraqi government,  and  repressing popular protests in Iraq.  It also reveals the extent to which the U.S. invasion of Iraq in 2003 actually helped Iran gain a dominant role in Iraq.   (https://theintercept.com/2019/11/18/iran-iraq-spy-cables/)

The Trump administration,  despite its claim to support the current protests in Iran,  has displayed its inhumanity and brutality toward the Iranian masses in the form of its  war threats and   severe sanctions.  Trump is in alliance with authoritarians such as Erdogan,  Ben Salman, Netanyahu,  Assad,  Putin and has no concern for the  Syrian Kurds and Syrian Arabs  who have been  fighting against the Assad regime and religious fundamentalists or  the Palestinians who like Kurds demand self-determination,  or the women of Afghanistan who are fighting against the Taliban.   It has taken to the extreme, the inhumanity and brutality that U.S. imperialism under previous administrations has promoted.

The Iranian regime has been hoping that China would pull it out of its state of bankruptcy and turn it into an efficient militarized state capitalist regime in its own image.  Just recently,  Iran signed an agreement with China which gives the Iranian regime $400 million in investment in oil, gas and infrastructure as well as 5000 Chinese security forces in exchange for oil at one third of the market rate.     China in turn looks at Iran as a place for it to expand its hegemony in the region.

In the face of this reality,  solidarity with the Hong Kong protests against Chinese government authoritarianism and with labor struggles,  political prisoners and women’s rights and environmental activists in mainland China is very much needed for Iranians.

It is also critically important for labor, feminist and youth activists around the world to express their solidarity with the current popular protests in Iran and their demand for overthrowing their regime.  Unfortunately some socialists in the U.S. and elsewhere have  sided with the Iranian regime and have even travelled to Iran to meet with foreign minister Zarif and praise him  instead of trying to meet with dissidents and demanding  the release of political prisoners.

This is a critical moment in world history in which the severity of the crises and the inhumanity of capitalism   are pushing people into the streets in various countries to oppose both poverty and repression.  We need solidarity actions that connect the labor, feminist, anti-racist and environmental struggles in the countries in which we reside to those in the Middle East and North Africa,  China,  Chile,  Haiti and beyond.    We need to oppose both neoliberal policies and state capitalist models such as those of China and Iran.

Image: People walk past buildings which burned during protests that followed the rise of gasoline prices, in the city of Karaj, west of Tehran, Iran, Nov. 18, 2019, in a photo released by Iranian Students’ News Agency, ISNA.

Also see these livestream dialogues between socialist activists from the Middle East and North Africa,  and those from  China,  the U.S. and Venezuela