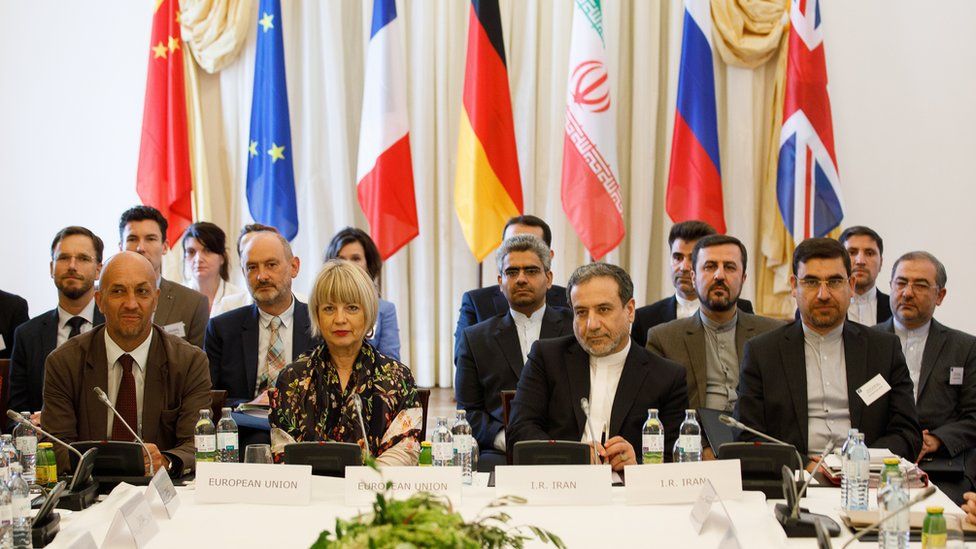 There are conflicting reports about the first round of negotiations between Iran’s Islamic Republic and the P5+1 – the United Nations security council’s five permanent members (namely: China, France, Russia, United Kingdom and United States) plus Germany – within the framework of the Joint Comprehensive Plan of Action (JCPOA), which was a detailed quid pro quo agreement regarding Iran’s nuclear development.

China is claiming this round of talks was successful, but the Europeans are quiet and the US is apparently asking Russia, China and some Arab Gulf states to put pressure on Iran to reduce uranium enrichment. Meanwhile, Iran is insisting that the two final texts it had tabled in Vienna covered everything required to finalise the deal, adding that the real obstacle is the US refusal to lift sanctions.

After the initial photo opportunity of the delegations sitting around the table, reporters in Vienna gave details of how the talks progressed. The Iranian delegation was in one room with European representatives. The Iranian delegates spoke in Persian and their comments were translated into English. They were then conveyed next door to the room where the US delegation sat – all in all, a lengthy, time-consuming and somewhat bizarre process.

Just to recap, the deal was signed in 2015 with an implementation date of January 2016 – only to be abandoned by Donald Trump as soon as he took office. The US officially withdrew from the deal in May 2018 and imposed dozens of new sanctions against Iran. Joe Biden, during his election campaign, had indicated that he would rejoin the deal – to the fury of the ‘regime change from above’ Iranian exile groups and the Israeli government. However, the resumption of negotiations has taken a long time, mainly because of the presidential elections in Iran.

You might be forgiven for failing to notice the negotiations. Unlike the original JCPOA talks, they were not exactly headline news – except in Israel, where there seems to be an endless obsession with the alleged ‘threat’ of an Iranian nuclear bomb. A comrade has forwarded me a sample of some of the articles in the Israeli press over the last week and they give a rare insight to the mindset of the Israeli government and media. On December 4 Ha’aretz had an article by Zvi Bar’el under the headline, ‘Iran has drones and missiles – but not enough chicken or meat’, drawing attention to the country’s well known economic problems.

By December 6 Israel was already worried that a deal might be struck. An article in Ha’aretz, entitled ‘Can Israel alone prevent a nuclear Iran?’, gave prominence to a quote by Mossad director David Barnea: “Iran won’t have nuclear weapons – not in the coming years, and not ever. This is my commitment, and this is the Mossad’s commitment.” The paper also covered a ‘scoop’ by The Jewish Chronicle, quoting its deputy editor, Jake Wallis Simons:

… the sabotage of centrifuges at Iran’s Natanz enrichment facility in April was committed by 10 Iranian scientists recruited by Mossad. According to the report, the scientists believed they were working for Iranian opposition organisations … Some of the explosives used were dropped by drone and collected by the scientists. Others were smuggled into the facility on trucks that supply food to the workers.

Explosives were also used in an attack on Natanz in July 2020, the report said, and a third attack in June 2021 was carried out by a quadcopter that had been smuggled into Iran in separate components. The drone fired missiles at a centrifuge manufacturing plant near Karaj, around 50 kilometres north-west of Tehran.

Even more interesting was the information that in 2019 Mossad agents planted explosives in the construction material used to build the centrifuge facility at Natanz. The explosives were triggered in 2020, just hours after Iran announced that it had started operating advanced IR-5 and IR-6 centrifuges.

As the writer points out, it really does not matter how many Iranian nuclear scientists were recruited by Mossad (via Iranian opposition groups): it is a direct message to the Iranian government that the country’s nuclear scientists either face assassination or they might be recruits of foreign powers.

Only an ignoramus can believe that an external force, whether an espionage agency (Mossad or the CIA) or an army, can prevent a country with a population of 85 million, with a nuclear and industrial infrastructure of the type now existing in Iran, from acquiring nuclear weapons. It’s true that with stratagems it is possible to cause damage and to delay the inevitable, and at best to buy perhaps a year and even somewhat more, but we have to understand that no external force can prevent a determined Iran from producing nuclear weapons, except by means of an overall military conquest.

As many Israeli and international commentators have written, Iran has been careful in its approach to nuclear military capability. Although the country can enrich uranium to levels necessary for a nuclear weapon, it has stopped short of doing this, presumably because it fears direct confrontation with world powers.

By contrast, the Israeli threat is real. On December 4 an explosion shook the area near Iran’s main nuclear-enrichment plant at Natanz – the explosion was heard 12 miles away. Of course, Natanz has been the subject of a whole number of attacks and acts of sabotage, yet the Iranian government tried to play down the latest explosion. The Tasnim news agency in Tehran quoted an Iranian army spokesman claiming a missile system had been test-fired and there was no reason to be concerned. It is hard to believe this claim, as even the most irresponsible Iranian military official would be aware of the dangers of any explosion close to a nuclear plant.

If this latest attack was another Israeli action, as seems likely, we will probably hear its representatives boasting about it some time soon.

If all this was not bad enough, the US authorities imposed new sanctions on 13 Iranian organisations on December 8 – a day before the resumption of talks in Vienna. The new list includes Iran’s Law Enforcement Forces and the Counter-Terror Special Forces – the group tasked with dealing with the sabotage of nuclear plants by Israel and Iranian opposition groups. The response from Iranian foreign ministry spokesman Saeed Khatibzadeh was no surprise: “Washington fails to understand that ‘maximum failure’ and a diplomatic breakthrough are mutually exclusive. Doubling down on sanctions won’t create leverage – and is anything but seriousness and goodwill.”

Of course, Iranians do have to live with the danger of nuclear plants. But it is the Israeli attacks, added to the long-lasting effects of punitive sanctions, affecting every aspect of their daily lives, that pose the biggest danger.