Iran nuclear deal: yet another failure 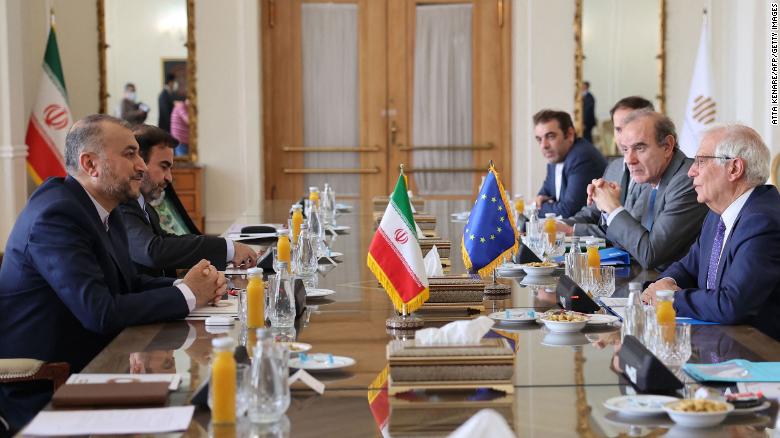 The saga of the Iran nuclear deal continued last week – this time with a change of venue. After the failure of weeks of negotiations in Vienna, the latest round in Doha was a direct consequence of the interventions of the European Union, which has its own reasons for wanting a resolution of the issue – EU states are desperate for the lifting of sanctions in order to purchase Iranian oil.

On June 26 Josep Borrell, the EU’s foreign policy chief, made an unexpected trip to Tehran, met with Iran’s foreign minister, Hossein Amir-Abdollahian, and announced at a subsequent news conference: “We will resume the talks on the JCPOA [Joint Comprehensive Plan of Action] in the coming days … I mean quickly, immediately.” Soon after Borrel’s visit, Robert Malley, the US chief negotiator, tweeted: “We remain committed to the path of meaningful diplomacy, in consultation with our European partners.”

The week before, the Middle Eastern press was full of rumours about a concession by the Islamic Republic, claiming Tehran had withdrawn a previous condition that the Iranian Revolutionary Guards Corp (IRGC) be removed from the list of sanctions, so that the stalled efforts to resurrect the nuclear deal could resume. All this while sections of the Iranian press and media were denying Iran ever made such a condition.

This time Qatar was chosen as the venue for ‘indirect’ US/Iran talks. When diplomats say ‘indirect talks’, they mean that others (in this case Qatari officials) will act as the go-between, and the two sides once again sat in separate rooms. In this way the Islamic Republic can claim it has not talked directly to the ‘Great Satan’. This, of course, is totally ridiculous, as it is only a cosmetic cover and even the most diehard supporters of Iran’s supreme leader, ayatollah Ali Khamenei, have few illusions about the meaningless slogans of the regime.

For all the claims of the Iranian government that it can survive the current sanctions and is not desperate for a deal, ordinary Iranians have suffered from the economic costs of the failure of the Vienna talks. The rial has now fallen to a dismal 42,000 to a dollar, meaning that the cost of living in a country that imports most of its basic food items is unbearably high for ordinary citizens.

News of the talks in Doha was enough to bring down the unofficial rate of the dollar by a few thousand rials for a short while. However, a mixed reaction to this latest episode of marathon talks has increased the price of the dollar yet again. After all, in January the Biden administration was telling the world that there were only a few weeks left in which a return to the deal would be “feasible”. Yet six months later there seems to be no end to negotiations.

The government of Ibrahim Raisi is facing major challenges inside the country too, where mass demonstrations have been taking place in most major cities (see below). In the conservative-dominated Majles, Iran’s parliament, there have been calls on ministers dealing with economic issues to resign, as well as demands that Raisi be summoned before a parliamentary hearing over his role is the current crisis.

The Doha talks did take place on June 28-29, but they did not get anywhere – although it does look like they will resume once again. On June 30 the United Nations security council, after discussing the talks with the US, Britain and France, blamed Iran for the failure. Meanwhile, Russia and China blamed the US.

Despite all this the Iranian delegation claimed the Doha talks were positive! According to Ha’aretz,

… sources in Qatar report that the US has already embarked on talks with Qatari government agencies about the technicalities involved in releasing Iranian funds now frozen in banks around the world, using the Qatari banking system. It’s possible that some of this money will be released soon. [1]www.haaretz.com/middle-east-news/iran/2022-06-29/ty-article/.premium/cautious-optimism-in-the-air-again-as-u-s-iran-nuclear-talks-resume/00000181-ab9c-d540-a1af-ebdf26180000

Iran’s foreign minster blamed the US for failing to put forward any new proposals, especially when it comes to “providing guarantees” that a future US administration would not walk out of the deal in the manner Trump did. Iran’s UN ambassador, Majid Takht Ravanchi, explained things further:

Iran has demanded verifiable and objective guarantees from the US that JCPOA will not be torpedoed again, that the US will not violate its obligations again, and that sanctions will not be reimposed under other pretexts or designations.

Meanwhile, the new Israeli prime minister, Yair Lapid, visited French president Emmanuel Macron in Paris on July 5 – his first diplomatic meeting since taking office last week. The focus was once again on Iranian attempts to revive the Iran nuclear deal with world powers, to which Lapid was totally opposed. He claimed that “the Israeli public stand together on the matter of Iran” and that Israel’s views on this “dangerous agreement” need to be heard. Israel is also raising the usual alarm about Hezbollah.

Of course the cyberwar between Israel and Iran is continuing. In Iran the steel industry was hit by a cyberattack, and Iran has made repeated attempts to undermine the Israeli infrastructure through similar attacks. Israel is secretive about the consequences of the Iranian attacks, but clearly they were more effective than on previous occasions – the Israeli press reported that hackers, presumed to be Iranian, set off the sirens used to warn about rocket attacks, while on July 4 pro-Iran hackers claimed they had attacked the Tel Aviv metro, which is under construction, bringing down its website. According to Israeli officials, however, the hackers did not gain access to the data and information in the system.

According to Ha’aretz, a malfunction was found in the internet system and an “examination revealed the website was attacked using a DDOS attack originating from abroad.”[2]www.haaretz.com/israel-news/2022-07-04/ty-article/.premium/after-iranian-on-iranian-cyberattacks-pro-iran-hackers-claim-tel-aviv-metro-hit/00000181-ca08-d0be-a5e9-ff1b3bdb0000. So-called DDOS (distributed denial-of-service) attacks are considered the simplest form of cyberattack; a website is bombarded with traffic and queries with the goal of forcing it offline.

Check Point, an Israeli cyber security firm, claimed recently that Iran was responsible for hacking into the account of a number of senior Israeli officials and impersonating them. According to Gaby Portnoy of Israel’s National Cyber Directorate, his organisation has stopped 1,500 cyberattacks in the last 12 months. The outgoing Israeli premier, Naftali Bennett, added:

Israel is doing pretty well on the defensive side. My approach with our enemies, especially Iran, we don’t go around just wreaking havoc in Tehran. That’s never been our policy. But our policy is, if you mess with Israel, you’ll pay a price and you can no longer hit Israel through proxies and get away with it. We’re not going to try and fight those folks, but hit the bully.[3]www.timesofisrael.com/mess-with-israel-youll-pay-a-price-pm-warns-after-iran-steel-plant-cyberattack.

All this gives us a taste of modern warfare (or at least modern cold wars), but also Israeli paranoia about Iran. Contrary to what the rightwing opposition and sections of the left in Iran keep telling us, Israel is not concerned about Iran’s nuclear programme or its empty slogans. What Israel fears is a potential economic, technological rival in the region. Iran is a country which – despite all the odds and being ruled by reactionary clerics – made major advances in cyber technology, an area where Israel sees itself as a world leader. This animosity will continue if a nuclear deal is signed. It would even continue if a regime with slight criticisms of the Zionist state were to replace the Islamic Republic, and that is why the Iranian exiled left’s silence about Israeli attacks inside Iran are shameful, short-sighted and a sign of capitulation to pro-US, pro-Israel pressure. They seem to tail the least class-conscious elements of a populist movement inside Iran, as opposed to coming up with progressive, anti-imperialist, anti-Zionist, radical answers.

Inside Iran protests have continued. Amongst the most notable nationwide ones we can mention those by pensioners over the rising cost of living. Meanwhile, in southern Iran around 2,000 oil workers, employed on contracts by 13 petrochemical companies, went on strike demanding a pay rise and a shorter working month – 20 days work, with 10 days rest. This is mainly because the working conditions for these project employees are very harsh. After a previous protest some companies accepted this demand, but many have refused to allow the workers the extra rest time. After all, in Iran for most workers the weekend lasts just one day (Friday).

Every time there is a protest, especially if it has a working class element, sections of the Iranian left in exile get very excited, telling us that the revolution is just around the corner. However, the reality is that most of these protests are defensive, often over unpaid wages or inhuman working conditions. And there is little sign of coordination or political direction.

Iranian communist Shahab Borhan, addressing this section of the Iranian left, sums things up very well in a tweet:

There are leftists who see the existence of two or three trade unions, and teachers and ‘retirees’ associations, and their hard-working struggles as a source of hope, as if these organisations will fill the alternative vacuum and political leadership. This is self-deception. These gelatinous quasi-organisations are, firstly, guilds/syndicates and not political.

Iran needs a leftwing political alternative, a leftwing hegemony, a leftwing strategy for intervention in social movements. Otherwise the protests we see will go nowhere. But the Iranian left – despite having a potentially large social base and dozens of parties and organisations, each with beautiful paper plans for the future – is too marginal to develop a leftwing alternative.

Other comrades are getting excited by oppositionist comments made by former supporters of the regime – amongst them Faezeh Hashemi, the daughter of former president Ayatollah Hashemi Rafsanjani, along with the daughter of another former president, Mahmoud Ahmadinejad. These comrades tell us that all this points to divisions amongst Iran’s rulers, but I am more than sceptical. Both women are relatively insignificant figures. They have accumulated enormous wealth, benefiting from corruption and privileges associated with those who once held high office or, in the case of Faezeh Hashemi, have inherited huge sums from them. True, both have burnt all their bridges with the regime, but their remarks will worry neither the supreme leader nor his allies.