Iran protests: is this time different? 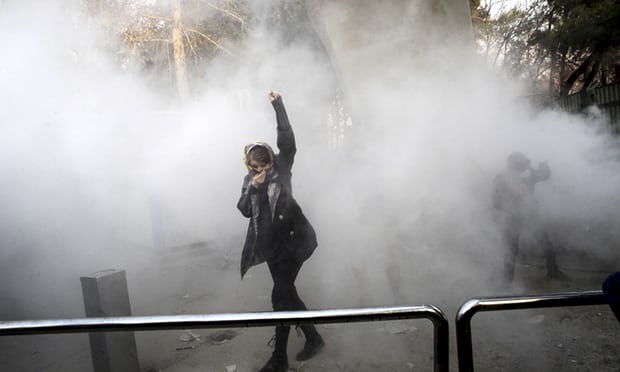 The protest movement that began on 28 December differs from those in previous years. There is universal recognition that the protests were triggered off by the worsening economy of the country, unemployment, and the unfulfilled promises made after the singeing of the nuclear accord by the Rouhani administration with the major global powers two years ago. There was also the issue of the widespread corruption, sometimes amounting to astronomic figures at all levels of government. Yet economic strictures and inflation are, if anything, less today than in Ahmadinejad’s time in office, nor massive corruption a new phenomenon. We therefore need to look at the root causes of the current protest movement elsewhere.

Cities and large and small towns

While the demonstrations in Mashhad appear to be the first noted by the media, it very rapidly spread across the country. This contrasts with the last major series of public protests after the fraudulent elections of 2009 that gave Ahmadinejad his second term of in the president’s office.

There the main centres of the popular protest was in Tehran, where at its peak up to 3m people marched, and a few other major cities. Now demonstrations have been seen in small or medium sized towns such as Doroud,  Andimeshg, Izeh, Shahrud, and Neishapour, alongside Tehran, Isfahan, Shiraz, Kermanshah, Arak, Yazd, Ghom, Sari, Rasht, Hamedan, Ghazvin, Bandar Abbas, Mashhad and many more.

Unlike 2009, where the majority of the protestors were from the more secular middle class, today the majority of the protestors are from the lower layers of society, those whom the economy has left more destitute than ever. Furthermore, the outlook looks equally bleak with little prospects of improvement. Particularly the educated youth from the less well-off classes with no prospects of work have been prominent in the current protest movement.

It took only three days for slogans with economic content to be transformed into political ones calling for the overthrow of the regime. Moreover, such slogans as Death to Rouhani, and Death to the Dictator – and later more overtly Death to Khamenei’ – targeted both the elected government of Rouhani and the non-elected structure with the Supreme Leader, Ayatollah Ali Khamenei’ at its helm. The latter’s picture has been torn down. In many towns demonstrators have attacked, and even burnt government buildings. Such slogans were heard in almost all the towns and cities where demonstrations took place. In comparison, it took the people over one year to elevate their slogans into the political realm in the 1979 revolution. In 2009 such slogans were very sporadically heard, and only directed at the supreme leader.

There seems to have been a long prelude to the current protests. Over the last year we have witnessed almost continuous small-scale protests across the country with complaints that related to loss of jobs, non-payment of wages and corrupt banks swallowing up life savings. These included teachers protesting at pay and working conditions, workers protesting at layoffs and non-payment of wages, savers protesting outside banks that had swallowed up their savings. There were protests outside the ministry of labour when trade union leader Reza Shahabi was taken seriously ill while imprisoned. Some of the slogans being uttered, especially those opposing the adventures and expenditures of the regime in Iraq and Syria, such as Forget about Syria, think about us, contrasting with the increasing poverty of the people were also heard sporadically over the previous year. All these were almost like a dress rehearsal for today and may explain the rapid escalation of slogans from economic to political.

While the deteriorating economy, increasing unemployment and rapidly rising cost of living, has been the background to the increasing discontents in the country, the economy was much worse under eight years of Ahmadinejad than it is now. During his tenure, despite the much higher oil revenues, growth was 1% versus the 4% reported now. Similarly, inflation was in excess of 400% while today reported inflation is nearer 60%. Thus it is the non-improvement of the economy despite the promises made after sanctions were supposedly removed that are the target.

Slogans against corruption have featured in a lot of the slogans being uttered across the country. Such slogans as Our country is a house of thieves, across the world it is unique, highlight the disgust people feel at the astronomical levels of corruption of all sections of the regime. Despite rigid censorship, the increasing rivalry between factions particularly after the signing of the nuclear accord has allowed discussion of corruption to enter the media. There was not only a naming of names but also the printing of astronomical figures of corruption. People were particularly angered by the huge sums of money diverted to the clerical institutions, which they believed should have gone into welfare in these bad economic times. It is thus no surprise that alongside slogans against the entire regime, there have been others targeting the clergy as a group (The people are begging, the clerics act like God or Mullah, shame on you, let go of the country).

The entire regime – meaning the supreme leader Ayatollah Khamenei’ and the Rouhani government – are blamed for the deteriorating economy and the corruption. Even the basij mobilisation forces have been targets of the demonstrators in some places. Yet the revolutionary guards (sepah pasdaran) have been surprisingly spared. However, the revolutionary guards are one of the main causes of both corruption and the economic downturn. The sepah and the thousands of companies under their control account for 30% of the economy. They have a ring-fenced (secret) budget that is sliced off before the main budget is presented to Majles for ratification. They pay no taxes. They control the entire enormous smuggling network, from luxury cars and videos to narcotics. They have special access to scarce foreign exchange. Hence they cannot be absolved from the bankruptcies and downturns in the other sectors of the economy. Operating under the radar, their role in the mess that is the country, is not fully appreciated. The sepah even supported the demos in the first two days hoping to weaken President Rouhani, before they changed direction. They have as yet to directly intervene in a significant way in containing the protests.

The earthquake with a Richter scale of 7.5 that hit western Kurdistan last autumn showed the incompetence of the administration and the utter distrust of the people in its ability to cope. Within 24 hours the people of Kermanshah, the closest city to the epicentre of the quake, and also sustaining damages by it, had sent out over 1,000 trucks loaded with aid for the victims of the earthquake, followed by people in many other parts of Iran. It was as if people had lost any hope of the government having any realistic and effective response. There are here echoes of the earthquake that flattened the city of Tabas on the eve of the 1979 revolution. Popular mobilisation of aid to the victims of that natural disaster was an important impetus on escalating the revolutionary movement against the shah.

In summary the current uprising is a culmination of accumulating feelings of frustration by the poorest and most deprived sections of society with the entire regime of the Islamic Republic. While sections of the population had previously hoped for change and reform within the system, today it is clear that even those who in the past could be relied upon to rally round one or other faction of the regime have lost all hope.

Yet this remains a protest movement that knows what it does not want but has yet to find what it wants in its place. In the absence of organisation and leadership with a clear alternative to the regime, the current protests are destined to either peter out, be repressed, manipulated by foreign enemies, or be hijacked by one or other populist demagogue.

I wish to thank Ardeshir Mehrdad for some of the points made in this article.