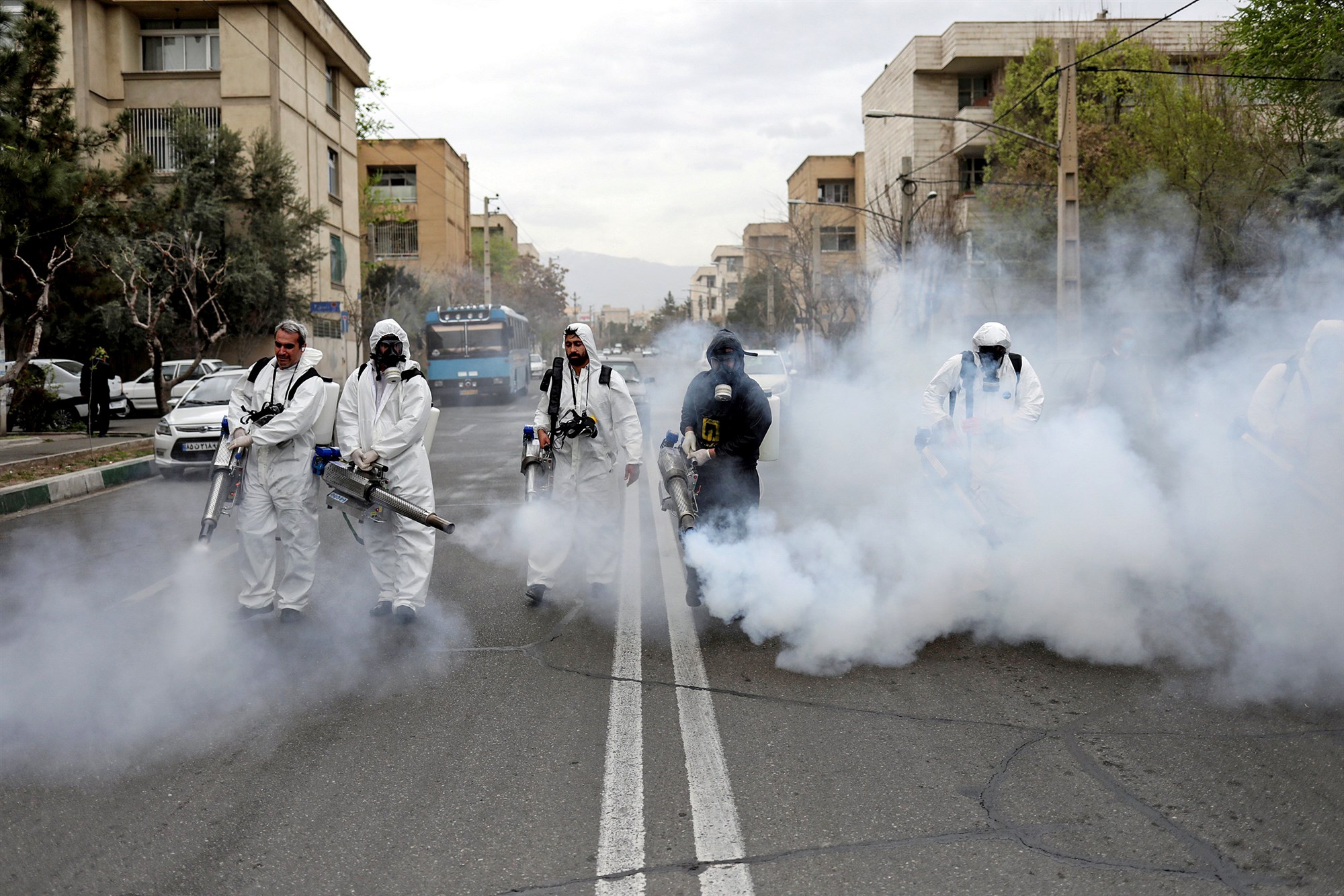 After years of increasing tensions that nearly led to war, Iran has moderated its approach to the West, shifting from a policy of provocation to one of limited cooperation. The change reflects an effort to avoid direct confrontation with the United States that the Iranians say could benefit President Trump in the November election.

Nowhere is the shift more evident than in Iraq, where Iran has backed a pro-American prime minister and ordered its proxy militias to cease their rocket attacks on American forces.

The Americans, while publicly dismissive of any change in Iranian posture, have quietly reciprocated in modest and indirect ways.

Taken together, the openings represent an incipient détente that, even if it does not last or lead to the end of hostilities between Iran and the United States, has already lowered the temperature of the relationship, reducing the risk of open conflict.

“A war is less likely to happen, but there is still the risk of a confrontation,” said Randa Slim, a senior fellow at the Middle East Institute. “But it’s less likely because the intent of the primary actors has shifted. Both Iran and the U.S. definitely do not want a war six months before the U.S. elections.”

Iran’s shift, which has not been announced or explained publicly, appears to be tactical, analysts said, noting that the country still vehemently opposes the Trump administration’s demand that it renegotiate its nuclear agreement with the West and that it has not backed off its goal of ousting the United States military from the Middle East. Publicly, both countries remain engaged in verbal warfare.

But the recent signs of de-escalation have been significant:

Diplomats, Iraqi and Iranian officials and analysts cite a combination of reasons for the change, including a fear of war with the United States. They also note that Iran is overextended — fighting a coronavirus epidemic, a tanking economy and public unrest at home — and needs to retrench.

Tehran was caught by surprise when the Americans retaliated for the killing of an American contractor in Iraq in December by killing the leader of Iran’s elite Quds Force, Maj. Gen. Qassim Suleimani. The United States threatened a disproportionate response if another American was killed, something Iran could ill afford.

“Iran is redefining its regional policies after Gen. Suleimani’s assassination,” Mohamad Hossein Malaek, a seasoned Iranian diplomat and former ambassador to China, wrote in Iranian Diplomacy magazine in April. “It’s reshuffling its cards, it’s reassessing its capabilities, and it has entered the arena with a new perspective and plan.”

Iran has also concluded that escalating tensions with the United States could provoke armed conflict which, aside from being painful for Iran, could benefit Mr. Trump politically, improving his re-election chances, according to people familiar with the policy. Since taking office, Mr. Trump has withdrawn from the nuclear agreement with Iran and imposed crippling economic sanctions that have devastated Iran’s economy.

An adviser to Iran’s foreign ministry said that even the powerful Quds Force — the branch of the Revolutionary Guards that runs proxy militias from Iraq to Lebanon — had been ordered to “act conservatively” and remain in “a holding pattern” until November.

In addition to the American election, Iran has its eyes on a United Nations Security Council decision in October that will determine whether an international arms embargo against it is extended. Until then, Iran wants to avoid alienating members of the Security Council, analysts said.

The Trump administration credits its “maximum pressure campaign” against Iran, including sanctions and military threats, for forcing the country to rethink its strategy.

“Pressure works,” Brian Hook, the State Department’s special representative for Iran policy, said Tuesday. “For over three years we have contained and countered Iran through deterrence and diplomacy. The regime is also broke because of our sanctions. Iran’s leaders today face a choice: either negotiate with President Trump or manage economic collapse.”

The attacks in the Persian Gulf dropped off, the Americans point out, after Mr. Trump ordered the Navy to sink any Iranian vessels harassing American ships. On Tuesday, the Navy warned boats not to come within 100 meters of an American naval vessel in international waters.

At the same time, despite the all-or-nothing statements, the United States has engaged with Iran indirectly.

After Iran accepted the American-backed nominee for Iraq’s prime minister, Mustapha al-Kadhimi, the United States granted Iraq a four-month waiver from American sanctions on Iran so that Baghdad could buy gas from Tehran. The waiver — longer than the usual 30- to 45-day waiver — gives Iran access to much needed cash.

Another outreach between the two foes has involved discussions about a possible prisoner swap involving an American Navy veteran, Michael White, and an Iranian doctor in U.S. custody. The talks seem to have stalled in the past few days but neither side appears to have given up on them.

In another possible gesture, Iran’s Central Bank governor, Abdolnaser Hemmati, said in March that the United States had allowed some frozen Iranian funds in third countries to be released to Iran. The payments were widely understood to be for oil purchases.

United States officials deny that they allowed any frozen funds to be paid to Iran.

“What we’ve been seeing coming out of Iran over the past couple of months is more easily explained as a tactical shift in each theater that makes sense in that theater, rather than a strategic change,” said Jarrett Blanc, a senior fellow at the Carnegie Endowment for International Peace.

In Iraq, where the back and forth with the United States was most transparent, Iran was ultimately more concerned with stabilizing Iraq than installing its preferred candidate, Iranian officials said.

Anti-government protests in Iraq last fall that led to the resignation of the previous prime minister also condemned Iran’s influence and the virtually unchecked power of its proxy militias.

By March, with Parliament still unable to agree on a new prime minister, Iraq was facing a host of other problems as well: Plummeting oil prices had deprived the government of its main source of revenue, and restrictions imposed to fight the coronavirus pandemic had shut down the economy.

Iran relies on Iraq’s economy as a market for its goods and as an illicit source of revenue through the Iranian-backed militia groups.

“Iran considers Iraq one of its two most important countries in terms of its security because it knows that what happens in Iraq is not going to stay in Iraq,” said Ariane Tabatabai, a Middle East fellow at the German Marshall Fund.

In April, Gen. Ismail Qaani, who replaced General Suleimani as the Quds Force commander, came to Baghdad with a clear message. He told senior Iraqi political leaders that Tehran was troubled by Iraq’s economic disarray: “Things are not good in Iraq and they can’t go on like this because Iraq will become a burden on Iran,” he said, according to a senior Iraqi political leader who met with General Qaani.

With Iraq on the verge of falling apart and the Americans threatening to end the sanctions waivers for Iraq and refusing to aid its struggling economy, Iran blinked.

“Iran overplayed its hand and they were overstretched — in Lebanon, in Syria and then the protests in the fall — and the fact that Shiites protested against Iran, that shook them,” said a senior Iraqi politician who asked not to be identified in order to discuss delicate diplomatic issues.

Iran not only accepted Mr. al-Kadhimi, the American choice, but also lobbied its allied parties in Iraq to support him.

Western officials took that as a victory.

“The narrative since 2003 is that the West has allowed Iraqi politics to shift toward Iran,” said a senior Western diplomat, speaking on condition of anonymity. “But actually here, this time, the Americans and the British supported Kadhimi from the beginning and Iran did not, and it was Iran who moved a little.”

Featured image: Firefighters wear protective masks amid fear of the coronavirus as they disinfect streets ahead of the Iranian New Year, Nowruz, in Tehran on March 18, 2020.Ali Khara / West Asia News Agency via Reuters file