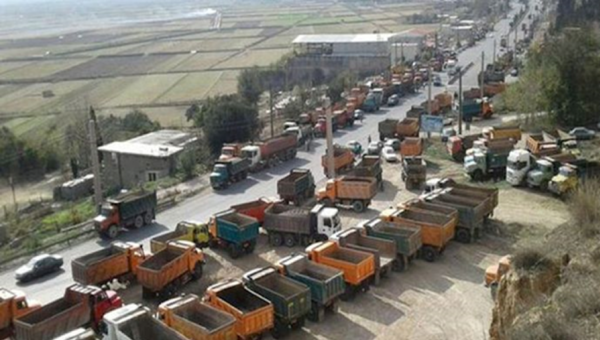 The strike is the second that truck drivers in Iran have staged this year, after a prolonged strike action in May in which they protested against rising costs for insurance, repairs, spare parts, and tolls, while their wages were stagnant. Back in May, the government has reportedly agreed to raise the pay for truckers by 15 percent, VOA reported.

According to The Middle East Monitor, nothing has been done yet to meet the truckers’ demands from May.

The latest industrial action by oil truckers in Iran comes less than two months after the first set of U.S. sanctions on Iran snapped back, and just six weeks before the second round of sanctions, including on Iran’s key revenue source—oil exports—kick in.

Over the past few months, Iran’s economy has faltered, and its currency, the rial, hit a new low this week against the U.S. dollar on the unofficial exchange rate.

The economic hardships are causing a surge in the price of goods, including diapers. Shortages of goods also abound, with Iranian authorities conducting raids to confiscate illegal hoards of rare and costly items such as diapers.

The sanctions on Iran’s oil are now expected to remove more than 1 million bpd from the oil market, compared to earlier projections of around a 500,000-bpd loss, before the United States started to show signs that waivers would be given sparingly, if at all.

Meanwhile, in more bad news for Iran, Bloomberg reported that India is not planning to buy any crude oil from Iran in November, raising the prospect that Tehran will lose another major customer as U.S. sanctions kick in.

Indian Oil Corp. and Bharat Petroleum Corp. haven’t asked for any Iranian cargoes for loading in November, according to officials at the companies. Nayara Energy also doesn’t plan any purchases, said an industry executive. Mangalore Refinery and Petrochemicals Ltd. hasn’t made any nominations for that month, but may do so later, a company official said.

India is Iran’s second-largest buyer of oil, having imported an average of 577,000 barrels a day this year, or about 27% of the country’s total exports. With South Korea, Japan and European nations also cutting imports to zero, the loss of the Indian refiners, even if temporarily, is a major blow for the Islamic republic.

While final decisions on purchases aren’t due until early October, and the refiners could still change their minds, investors are already contemplating a worst-case scenario. And one of the reason why Brent surged above $82 to a new 4 year high is that rapid drop in Iranian exports, while OPEC has refused to provide a guarantee that it would step in to replenish the lost market share.

Further output losses could push prices even higher as refiners urgently seek replacement barrels elsewhere. Around the world, only Saudi Arabia and, to a lesser extent, United Arab Emirates and Russia, have the capacity to pump more.

Brent hit an intraday high of $82.55 a barrel on Tuesday, up 23 percent this year, just after U.S. President Donald Trump railed against OPEC and demanded the cartel lower oil prices, a plea which however was met with a stern defiance after the weekend’s meeting in Algiers.

At the same time, with U.S. sanctions set to go into effect in early November, a major gap in the global oil market is emerging just as Brent crude hits a four-year high above $80 a barrel. Mercuria Energy Group and Trafigura among the world’s biggest trading houses, are predicting the loss of Iran’s supply will boost prices to $100 a barrel for the first time since 2014.