Trump will ignite a war with Iran, which will be great news for ISIS 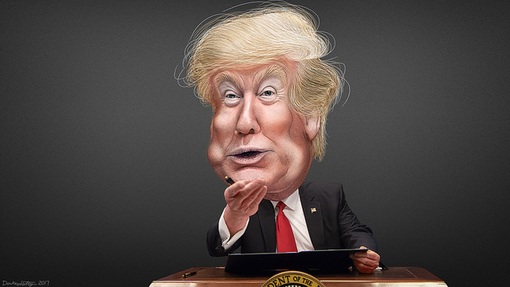 President Trump made great play when he came into office with his return of a bust of Winston Churchill to the Oval Office, presenting the move as a symbol of his admiration for adamantine patriotic resolve in pursuit of patriotic ends. Presumably, Trump was thinking of Churchill in 1940, not Churchill in 1915-16 when he was the leading advocate of the disastrous Gallipoli campaign in which the Turks decisively defeated the British army with great slaughter.

Trump is reputed to seldom read books or show much interest in history other than that of his own life and times, but it would be worth his while reflecting Gallipoli because Churchill was only the first of six British and American leaders to have suffered political shipwreck in the Middle East over the last century. The prime reason for these successive disasters is that the region has always been more unstable and prone to wars than anywhere else in the world during. Mistakes made on its battlefields tend to be calamitous and irretrievable.

Avoiding this fate is not easy: the six British and American leaders who came a serious cropper in the Middle East were generally abler, more experienced and better advised than Trump. It is therefore worthwhile asking, at the beginning of his administration, what are the chances of him becoming the next victim of the permanent state of crisis in the wider Middle East. He campaigned as an isolationist who would avoid being sucked into armed conflicts abroad, but his first weeks in office and his senior appointments suggest that he will try to take a central role in the politics of the region. The new administration projects a macho self-image devoted to “Making America Great Again” and this, combined with demonization of its enemies, will hinder compromise and tactical retreats. Western intervention in the region has usually come to grief because of arrogant exaggeration of its own strength and an underestimation of the capabilities of their enemies.

These failings unite with a crippling ignorance of the part of foreign powers about the complexity and dangers of the political and military terrain in which they were operating. This was true of Churchill who wrongly assessed likely Turkish military resistance in 1915. Lloyd George, one of the most astute of British prime ministers, made the same mistake in 1922 when his government destroyed itself by threatening to go to war with Turkey. Anthony Eden lost office after the Suez Crisis in 1956 when he failed to overthrow Nasser in Egypt. Tony Blair’s reputation was forever blasted for leading Britain into war in Iraq in 2003.

Of the three US presidents badly or terminally damaged by crisis in the Middle East, Jimmy Carter was the most unlucky, as there was nothing much he could do to stop the Iranian Revolution in 1979 or the seizure of diplomats in the US embassy in Tehran as hostages. Ronald Reagan’s presidency saw military intervention in Lebanon where 241 US Marines were blown up in 1983, and the Iran-Contra scandal that permanently weakened the administration. Significant though these disasters and misadventures seemed at the time, none had the impact of George W Bush’s invasion of Iraq in 2003 which led to the regeneration of al-Qaeda and the spread of chaos through the region.

In retrospect, these leaders may look foolhardy as they plunged into bottomless quagmires or fought unwinnable wars. Some like Carter were victims of circumstances, but entanglements were not inevitable, as was shown by President Obama who did read books, knew his history and was acutely aware of the pitfalls the US needed to skirt in Afghanistan, Iraq, Syria and beyond. Avoiding disasters which nobody else knew existed will seldom win a politician much credit, but Obama deserves credit for escaping being sucked into the civil war in Syria or into a broader conflict against Iran as the leader of the Shia axis. He justifiably suspected US allies like Saudi Arabia and the Sunni states of the Gulf of being eager to see the US fight their battles for them.

The Trump administration is seen by so many commentators as so uniquely awful in its contempt for the truth, legality and democracy, that they underestimate how much it has in common with that of George W Bush. After 9/11, the Bush administration famously gave the Saudis a free pass despite the many links between the hijackers and Saudi Arabia. Instead the White House channelled popular anger and desire to hit back provoked by 9/11, into its military campaign to overthrow Saddam Hussein as leader of Iraq.