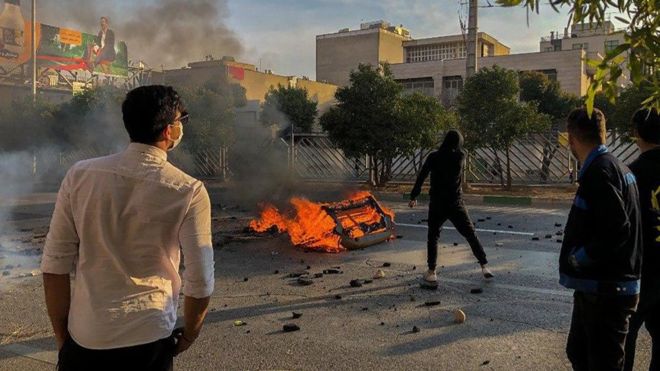 Over the last five days, tens of thousands of Iranians have protested against the hike in the price of oil, following an official statement issued by the country’s ‘economic coordinating committee’, which issued the following restrictions: each motorist is allowed to buy 60 litres of petrol a month at 15,000 rials (£0.10) a litre, but each additional litre will then cost 30,000 rials. The announcement came as a shock to Iranian drivers, who until this week could buy up to 250 litres of fuel at 10,000 rials per litre.

According to the government, the revenues gained from fuel will be used for cash payments to low-income households. The Iranian president, Hassan Rouhani, claimed on November 16 that 75% of citizens were currently “under pressure” and the extra revenue from the petrol price hike would go to them and not the treasury.

However, from the beginning there was a problem: no-one believes claims about helping the deprived from a government presiding over a system riddled with corruption and nepotism. Every day Iranians suffering from lack of food, medicine and basic goods, through a combination of sanctions and economic mismanagement, hear about multi-billion-dollar corruption cases and money sent abroad by unscrupulous capitalists – many of them close allies of one or other faction of the regime.

Iran’s oil minister and the country’s ambassador to the UK both claimed that the measures were good for “the environment”. Although there is no doubt that Iran’s heavy traffic is creating pollution, who believes claims like that from a government that is failing to take a responsible position regarding nuclear waste and radiation? A government whose lack of environmental policy has led to catastrophic weather conditions in the south of the country? A government that stands idly by, as major lakes dry up, while water from rivers is diverted to the highest bidder?

Of course, no-one should underestimate the effect of US-imposed sanctions on Iran, the subsequent reduction in the country’s oil exports and the fall in value of Iran’s currency.

According to the International Monetary Fund, Iran’s economy is likely to contract by 9.5% this year, mainly as a result of sanctions. However, we should also remember that successive Iranian governments have shown complete willingness to adhere to every dictate of the IMF and global capital. Earlier this year hundreds of thousands of Iranians received the following text message from government agencies: “Dear head of household, your subsidies have been eliminated.”

This was a reference to the monthly cash subsidies paid by the government to many families. The government claims that in order to determine whether a household is still eligible to receive them, it will now take into account all income and assets, as well as the ability to spend – for example, the number of foreign trips undertaken.

The government’s economic advisors – mainly enthusiastic adherents to neoliberal capitalism – have argued that the near-universal handout is not an optimal safety net for low-income families. In February 2018, Ali Larijani, the speaker of the Iranian parliament (Majles), stated that supreme leader Ali Khamenei had personally called for “structural reforms” to Iran’s budget. Note once again the contradiction between this adherence of the entire regime (including all its factions) to the dictates of global capital on economic issues, while repeating anti-US slogans ad nauseum.

Showing unbelievable levels of stupidity and ignorance, sections of the Iranian opposition are calling on western governments and human rights organisations to support the protestors in Iran. They do not seem to be aware that:

 These are to a large extent economic protests turned political because of the Iranian state’s violent response.

 Sanctions imposed by the west have played a significant role in impoverishing ordinary Iranians – as opposed to those close to government officials, who have often benefited from sanctions.

 Successive Iranian administrations (‘reformist’ and conservative), who have followed every IMF and World Bank dictate to the letter, have been instructed to remove subsidies, so that they can truly be accepted as flag-bearers for a neoliberal economy.

Given the above, do you really think these government and their ‘human rights’ organisations care about the killing of innocent Iranians? Who do you think came up first with the concept of abolishing state subsidies? Where in the world have they supported those demonstrating against economic hardship caused by abolition of subsidies?

The reality is that most Iranians cannot make ends meet. Unemployment is rising and university graduates cannot find work in line with their qualifications – many of them have three or four temporary low-paid jobs, often including work as Uber-type drivers. The increase in the price of fuel will have an effect on them, obviously. Crude oil is currently selling at $62 a barrel and, although Iran is one of the world’s largest oil producers, it has limited refining capacity, while sanctions have made it difficult to obtain spare parts for oil plants.

No doubt the country’s budget deficit has left Rouhani’s government little room to manoeuvre, but, even under these circumstances, announcing such a drastic rise in the price of fuel was inevitably going to lead to protests, and clearly the state and its security forces had been making preparations for the inevitable demonstrations, etc.

On November 16 alone Iranians uploaded hundreds of videos of protests, ranging from cars blocking highways to demonstrators shouting slogans and setting fire to pictures of Khamenei. The following morning the government attempted to close down the internet, but it did not succeed entirely. By November 19, 65 hours after the initial imposition of the shutdown, the last remaining networks were being cut and connectivity to the outside world fell further to around 4%.

The Iranian government’s inability to shut down the internet completely has raised some important questions. Generally speaking, governments need help from internet service providers (ISPs) and some countries, such as China, exercise much more control in regulating the ISPs, regularly disconnecting the internet in various regions.

When a government orders ISPs to disable their service, internet disconnection can happen in a number of ways. They could shut down or unplug devices, such as routers and servers, or change the domain name system (DNS), which regulates IP addresses. This is known as a ‘digital kill’, which can serve to allow selective government services to stay open.

Every device on the internet, including servers for websites and social media, has an IP address and the DNS acts like a street map, where the address is used to find a particular location. When a user wants to access a website, a translation occurs between what the user has entered in his/her computer’s web browser and the machine-friendly address necessary to translate the webpage. If an ISP provider or government stops this map, it basically prevents the internet from finding addresses.

So it is important to learn the lessons from the way the Iranian government attempted to close down the internet. Many activists on the left have illusions about the mobilising power of social media, but we have to be aware that, if and when the state finds it necessary to stop the left organising via social media or email, it will be very easy for governments in advanced capitalist countries to do that, even beyond their own borders.

There is no doubt the current protests are widespread and by all accounts most of the protestors are from the poorer sections of society. Despite the online shutdown, I have seen footage of demonstrations in several towns and cities, but surprisingly there are few reports of protests in Tehran – although small towns close to the capital have been the scene of violent clashes. Footage posted on social media suggest that up to 200 protestors have been killed since November 16.

The Security Emergency Centre of Iran’s interior ministry accused some internet users of “rumour-mongering” and “spreading lies” about the protests. On November 18 Rouhani claimed that protests had been few and far between – clearly a lie. He also warned motorists who have blocked major roads that CCTV footage will be used to prosecute them.

As the first footage of protests appeared, supporters of Khamenei in the conservative factions of the regime were claiming that the ‘unwise’ initiative taken by the Rouhani government was because he wants to resume nuclear negotiations with the United States – Khamenei had no knowledge of the latest moves, according to these people. Allegedly Rouhani was hoping that the protests would demonstrate how sanctions are damaging the economy and that they would encourage the supreme leader to engage in talks with the US and its allies.

Such claims were disproved on the morning of November 17, when Khamenei appeared on television confirming his support for the fuel price hike. He stated that most Iranians have a “comfortable life”, compared to other people in the region. Of course, it is difficult to grasp what Khamenei meant by a “comfortable life”, but this prompted speculation that he was comparing Iran with Syria and this was a (not so veiled) threat to declare a state of emergency, paving the way for the Revolutionary Guards to take power.

Amos Harel, writing in Haaretz, was typical of a number of commentators, when he posed the following question: “Iran’s protests are just what Trump wants. So why is he silent?”

The Trump administration seems to be no more involved, at least for the time being. The president is preoccupied with tweeting against the Democrats, who have begun impeachment proceedings against him, and hasn’t had a chance to make time for Iran-related matters.1

However, that does not mean that supporters of US-style regime change in Iran have kept quiet.

There have been endless commentaries on Saudi, US and Israeli-financed TV stations by so-called ‘experts’. Listening to their comments is like watching paint dry. They have no real information about what is actually going on Iran. They just keep on repeating their irrelevant, out-of-date views, still supporting sanctions – and, in the case of hard-line royalists, war – against Iran, as if sanctions had no role in the devastating economic situation that has led to increasing poverty and hardship.

As I have reported, there are hundreds of videos of protests in Iran, showing people shouting “Death to Khamenei”, and videos of security forces opening fire on protestors. But I have seen just one video showing people shouting pro-shah slogans. There are around 20 of them and they do not look very enthusiastic – it is almost as if they had been paid to do it. And none of the onlookers around them repeat those slogans. It is all very bizarre, but the royalists keep posting the same video, claiming that so many protests are pro-shah.

Do they think people are stupid? Apart from anything else, don’t they realise that people blame them – the advocates of ‘regime change from above’ – for supporting existing sanctions and calling for yet more, as much as they blame Rouhani and the rest of the regime.

At this stage it is difficult to predict what will happen to these nationwide protests. If the Iranian government had hoped that imposing censorship by blocking the internet will stop the riots spreading, they have already been proved wrong. On the other hand, if agents of the CIA are among those turning ‘peaceful protests’ into violent acts of destruction, Iran could be moving towards civil war – between the Islamic regime and reactionaries, as well as genuine protestors.