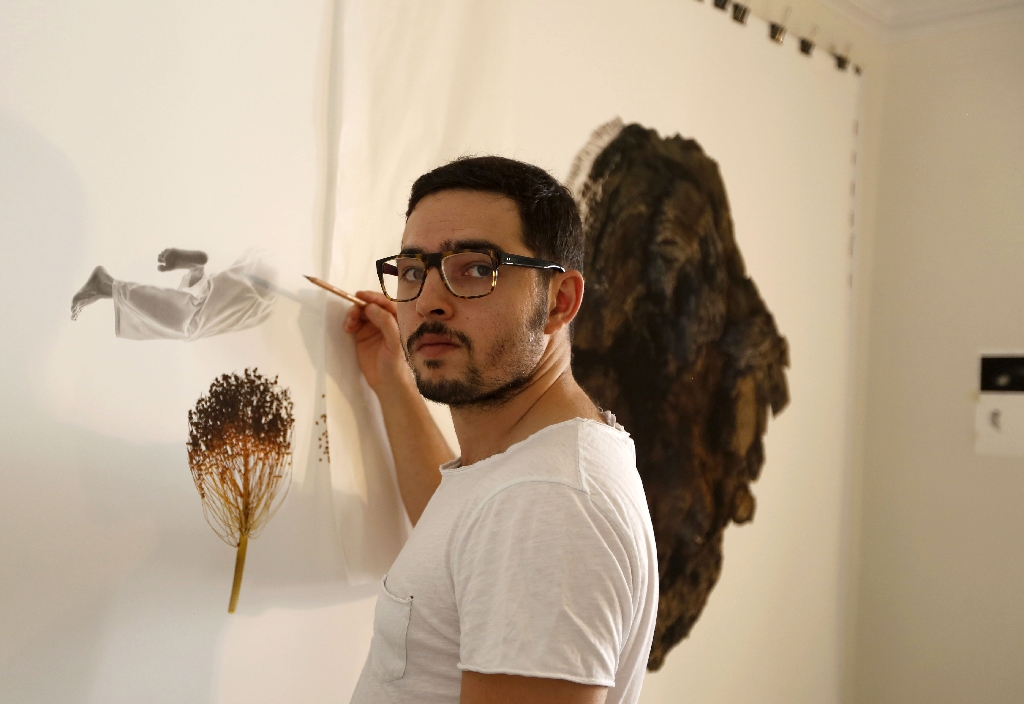 A gallery opening in northern Tehran, and a typical scene: silk scarves barely clinging to the backs of women’s heads, young hipsters, gentlemen in that most unrevolutionary of items — the tie.

The work has clear Iranian and religious themes, drawing on traditional mourning ceremonies, yet the censorious rulers of the Islamic republic — still deeply ambivalent about the liberating and libertine te ndencies of the art world — feel a world away.

Afshar, 33, himself epitomises the globe-trotting Iranian middle and upper classes. He teaches at a US university yet is still drawn back “like an itch I always need to scratch”.

“I’m not trying to re-establish my roots with this work. I enjoy being lost.”

Such return trips have become less fraught since 2013, when a new moderate government eased social pressures and rebuilt ties with the West.

“Even if I’m cynical, it feels more inviting when you have people from the government saying that Iranians from outside should come back and share something,” he said over coffee in a north Tehran cafe that looked like it had been airlifted in from Brooklyn.

The past decade has seen the number of galleries in the city explode from just a handful to more than 100.

The clerical establishment still meticulously monitors all art for anything deemed un-Islamic or obscene, but a public space has opened up for young creatives to live in a way that would have seemed impossibly daring just a few years ago.

Still, some worry they are just living in a bubble, trying to wish away Iran’s harsh censorship and disapproving authorities.

Some speak — off the record — of stints in prison and friends who fled the country for little more than their artistic tastes.

“When bad stuff happens we just ignore it. There’s no other way to deal with it,” said one Tehran-based curator, who asked not to be named.

“You’re sedated by thinking that you’re in a party when you’re really in a locked room.”

But even he admits the atmosphere is much lighter than in the past, and that this is an exciting time to be part of the art scene as Iran slowly reacquires its traditional status as a paragon of world culture.

The freer atmosphere has pushed ordinary artistic concerns to the fore: about authenticity and funding, and what it means to be an “Iranian artist”.

Hormuz Hematian, founder of the five-year-old Dastan Gallery in Tehran talks to AFP at his gallery (photo by: ATTA KENARE/AFP)

Nima Zaare-Nahandi, whose finely detailed abstract drawings feel unattached to any time or place, pushes back against the idea that his nationality should dictate his style.

“Art is universal. Can you say biology belongs to somewhere? The idea of creating an ‘Iranian school’ is what Westerners demand to make it exotic,” said the 34-year-old in his Tehran studio.

“Obviously local culture affects Iranian artists, but we are so exposed to world cultures today,” said Zaare-Nahandi, whose own influences lie more with Japanese cinema, and his time training in Paris and Madrid.

The challenge, he says, is not to create some single idea of Iranian art, but to build the institutions that can nurture future talent. “We need more than just galleries, which are purely commercial. We need education, museums, a good review.”

Slowly, those elements are starting to emerge, funded by a booming interest from local and international collectors.

But the numbers are still small and many obstacles remain, says Hormuz Hematian, who founded the Dastan Gallery in Tehran five years ago.

“Last year, the whole art scene in Iran made just $35-50 million. The entirety of the masterpieces of contemporary Iranian art cannot be worth the same as one painting at Sotheby’s,” he said.

“The problems are everything you can think of, including us — the galleries — the artists, the education system,” he added.

Iranian artist Nima Zaare-Nahandi speaks during an interview with AFP at his house in Tehran (photo by: ATTA KENARE/AFP)

“We need writers, translators. We need visitors not to feel scared to come here; hotels, entertainment and restaurants.”

Hematian says the market could grow five or 10 times in the next decade if only the remaining US sanctions on Iran can be lifted.

“There’s such a rich history of visual culture to draw on — calligraphy, architecture, illustration.

“The minute the banking problems are solved and the American, French or British markets open up to Iranian art, the growth will be huge,” said Hematian.

Of course, there is still the censorship issue to deal with, though many put that more on the level of “annoying” rather than repressive.

“It’s not fear — it’s more a question of uncertainty, which is… yes, annoying,” said a Tehran gallery manager, who also asked not to be identified.

“We have to be careful about how much skin we’re showing and things like that. It’s always an issue, although censorship can also make people more creative.

“But we are very optimistic these days. Life is getting easier. It’s blooming. This is the time to be here.”

Iranian artist Nima Zaare-Nahandi, seen during an interview with AFP at his house in Tehran (photo by: ATTA KENARE/AFP)