Iraq is in revolt 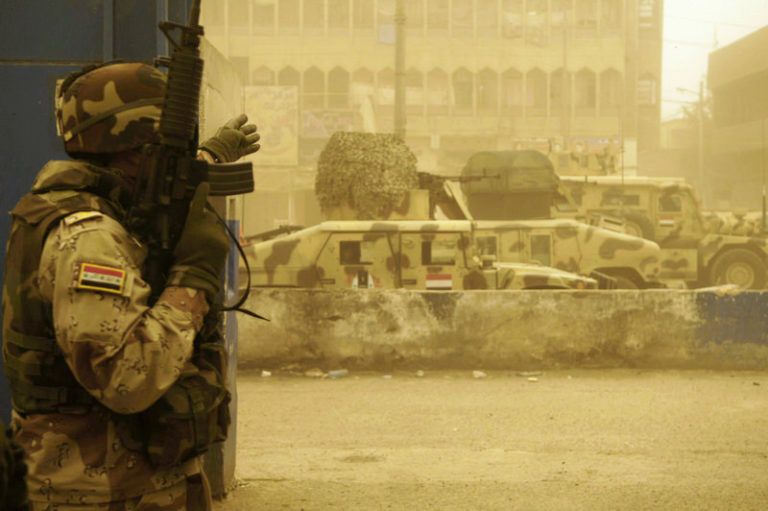 Iraq is poised at a turning point in its modern history as its people wait to see if the government curfew and close down of the internet will end the ongoing demonstrations.

I am staying in the Baghdad Hotel, off Sadoon Street in central Baghdad, not far from Tahrir Square, the focus of most protest movements in Iraq. On Tuesday I was expecting to visit Iraqi army bases north of Baghdad to find out if Isis was still a threat and what the chances were of it making a comeback.

I never went: on Tuesday afternoon at about 4pm I began to hear the “put put” of rifle fire in the distance which at first I disregarded, thinking there might be a wedding or some other celebration. But the sound got louder and soon there was the sharp crack of weapons being fired close by. In the lobby of my hotel, a man stopped me and said, “There are 10 dead already and the fighting is going to get worse.”

It turned out that the government had managed to turn a small demonstration of 3,000 people in Tahrir Square, who had been protesting for three months against official corruption, a lack of jobs and poor services, into a major incident. The protesters had tried to cross the Jumhuriya Bridge which leads in the direction of the green zone, the site of the parliament, the prime minister’s office and other official buildings. The riot police, who have a bad reputation in Iraq, opened fire with rubber bullets, stun grenades, and, eventually, live rounds. Soon a video was flashing around social media of the protesters, mostly under 20, being attacked by the police and hosed with hot water.

It was this incident which turned a small scale protest into mass demonstrations which may bring down the government of prime minister Adil Abdul-Mahdi. The riot police inadvertently detonated the explosive resentment felt by almost all Iraqis towards the kleptocratic state which has stolen as much as $450bn since the overthrow of Saddam Hussein in 2003.

All Iraqis know that the country possesses vast oil wealth, bringing in $6.5bn a month, but they live with widescale unemployment, lack of electricity, pervasive corruption and a poor quality health and education system. They know that vast fortunes have been made by government officials siphoning off money for projects that are never completed and, frequently, are never even begun. For many years, even the state’s bomb detecting equipment, which was entirely ineffective in detecting bombs, was being bought for tens of thousands of dollars apiece though it cost only a few dollars to make.

It is this sense of grievance which is now beginning to explode: unless the government can rein it in over the next few days it is unlikely to last very long. One of the strengths of the protest movement is that it has no leaders but is almost entirely spontaneous, with a wide variety of slogans, but this means the government has nobody to talk to, not that it is trying very hard to negotiate its way out of trouble. Many Iraqis say that it is a mistake to get rid of the government without knowing what will replace it but others argue that things could not be much worse for them and are prepared to take a leap in the dark.

Intense rage against government mass theft of Iraq’s resources has been there since 2003, but the Shia majority have usually been persuaded by their political leaders that they must stick together to stop al-Qaeda or Isis making a comeback. Up to the recapture of Mosul, the de facto Isis capital in 2017 after a nine-month siege, this argument often worked. But since then Isis has controlled no territory in Iraq and there have been no big bombings in Baghdad for three years. People are no longer so frightened by the fear of their families being murdered that they are prepared to ignore the mass corruption and lack of basic services.

The explosion over social grievances would have happened at some point and it was government overreaction which insured that this happened last Tuesday. Quite why it behaved liked this is something of a mystery: speculation in Baghdad is that the prime minister is advised by military hawks with little idea of the mechanics of Iraqi politics.

But it is noticeable that the government has failed to make any concessions since it’s made its first mistakes. “The prime minister should have done something like announcing that he would arrest the hundred most corrupt members of his government,” said one friend. Instead ministers have been saying that they will inquire into the reasons for the protests, but these are glaringly obvious and known to the whole country: corruption, joblessness and lack of services.

What will happen next? The government cannot maintain a total lockdown on Baghdad, a city of seven million people, for very long. Already people are beginning to move on the streets around my hotel and many of them heading for Tahrir Square. Closing down the internet may have disrupted communications between protesters, making it more difficult for them to stage demonstrations in the centre of the city.

But it has only displaced the protests to districts all over Baghdad, including the Shia stronghold of Sadr City which is reputed to have a population of 3 million. Reports yesterday spoke of crowds there setting fire to municipal offices and the headquarters of political parties associated with the government. The uprising has also spread across all of southern Iraq, though not yet to the Sunni provinces. The government may find it difficult to suppress the Shia, their own base support, using armed forces that are themselves mostly Shia.

The government’s legitimacy was low to begin with and is sinking by the day. Ali Sistani, the revered religious leader of the Shia, may come out against the government actions. Muqtada al-Sadr, the populist nationalist leader whose movement came first in the parliamentary elections in 2018, has said he supports the protests, though he does not want his supporters to play a leading role in them on the grounds that this would “politicise” the protest movement and discredit it in the eyes of some Iraqis. Even government spokespeople are refusing to talk to Iraqi journalists, probably because they do not want to be seen approving the government’s tactics. In other words, unless the prime minister can bring the crisis under control in the next couple of days his own administration may begin to implode.

Patrick Cockburn is the author of  The Rise of Islamic State: ISIS and the New Sunni Revolution